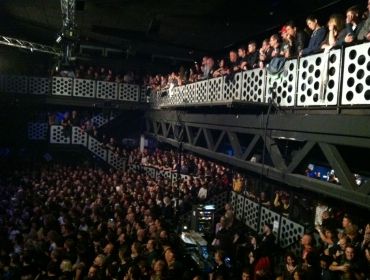 There are probably many ways we all get to go to gigs……  Sometimes the band we are going to see are favourites, sometimes they are of interest through hearing a couple of songs, interesting review, know someone in the band, get in for free so it doesn’t matter who’s playing & sometimes you get roped in to going by friends, family etc.
In this case for me it was the latter.  Never really being an Elbow fan myself although admittedly, their tunes are inevitably familiar & with particularly, the excellent “anti Bush” Leaders of the Free World had made me have a bit more of a listen to what they were saying, rather than how they sound as of late.
Tonight’s gig started for us walking into a seriously busy Monday night Academy, obviously popular chaps! Scandinavian, Denmark to be exact “prog rock” support band Mew were unfortunately getting towards the end of their set.  From what I heard, very interesting & another “new” band who inevitably, sound like an old band or a mix of old bands at least. This is a phenomenon that I seem to come across increasingly nowadays.  Interestingly, particularly in the press, there are claims that the seemingly masses of spacey British “hippy” type bands & American “new romantic” bands are being hailed as new & fresh?  Very good some of them may be but new & fresh?  I think not…
Maybe all the journalists are too young to remember all this stuff first time around?  Anyway, disregarding my ramblings,  Mew, on the evidence of the couple of songs we saw tonight are worthy of some of the plaudits given to them & in these days of musical, artistic & social malaise should give enough to the kids of the computer age to make a success of themselves (think I’ve been reading too much lately!).
Already on their third album, although the first two I believe were mainly Swedish only releases, I’m sure they will be regulars on MTV. If you have teenage kids & have to suffer that in your house.

On to headliners Elbow.  As I mentioned earlier, the venue was ridiculously full tonight & with over eager punters shoving a bit too much for a view of their heroes I’m uncomfortable before the band start.  What follows, I’m sure, is a good rendition of, as I mentioned earlier, familiar songs from their 3 albums, Asleep In The Back, “Cast of Thousands & the new Leaders of The Free World.  I actually enjoyed a few of them myself but there is an overall feeling, or something about Elbow that just leaves me a bit flat. Enigmatic singer Guy Garvey would make a living as a stand up comedian I’m sure, he has a great rapport with the audience, which is great to see but……  Although I recognise he is a really good technical singer, his voice gets on my tits!
It is almost choir boy like in its clarity & precision & coming from someone dressed like one of the Wurzels, although fitting a theme as we are in Bristol, not really my idea of rock n roll.
There are many that will say that they indeed are not & that I am missing the point, this leads us back to the beginning of the review, I’ve never much been into Elbow!  Unlike the rest of tonight’s crowd who absolutely loved them!

Shows how much I know!