neilcrud Video of The Week Sons of Selina 1 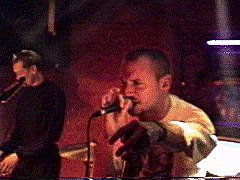 END_OF_DOCUMENT_TOKEN_TO_BE_REPLACED

4Q were a punk band from Colwyn Bay (1987-90). Originally featuring Edi Filmstar (voc), Neil Crud (gtr), Wayne The Bastard (bass) and Paul Puke (drms). Edi quit after 4 gigs and Cumi Pants (voc) joined and Paul Puke was replaced by Matt Vinyl (drms) to make up the most prolific line-up in the band’s gigging history. By mid-1989 Gumpsh (gtr) and Robin (gtr) had joined after Wayne had left with Neil taking over on bass. Neil Crud smashed his bass on stage in Sept’90 and quit the band and despite Cumi looking to recruit a replacement things stopped. END_OF_DOCUMENT_TOKEN_TO_BE_REPLACED

Bore da, and a very Happy New Year to yas. A little late, granted, but it’s still January and I have the excuse of having had one of those nasty bugs that were doing the rounds. Poor Mickey. I was going to say “Hey, that’s Christmas over for another seven months, the Easter eggs are in the shops and they’re trying to sell us summer* holidays.” (*Summer; expand your vocabulary, look it up). Going to. You know… because the ads for it always start appearing by August, so I was having a pop at the greedy bastard capitalists who aren’t yet satisfied with the current levels of global bankruptcy. But this year they’ve gone even further, I’ve ALREADY seen an advert in a TV mag. January 15th. For next Christmas. 344 days to go. Fucking insanity. Insert rant of your choice here, I really can’t be bothered with it any more and hereby tender my resignation from the human race.
END_OF_DOCUMENT_TOKEN_TO_BE_REPLACED