neilcrud Video of The Week 20 Racine 0

Live footage of link2wales favourites 20 Racine has been unearthed and published on YouTube. The band feature DJ Sid from Rhyl, and Iain Davies vox /guitar and Simon Gregory – bass.

They had two TudnoFM sessions released as an album last year on link2wales records.

The gig is one of two rediscovered from the Bull & Gate in London and was filmed almost twenty years ago… (the second gig will be published soon). 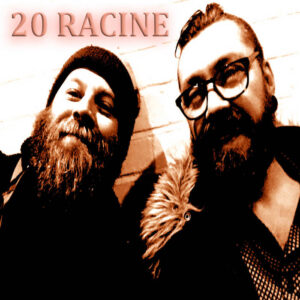 Link2wales is so proud to announce the release of 20 Racine – The Album.

Originally from Rhyl and called Hobo – the band / act have gone through various transitions during their history, with Sid and Ian being the mainstays…

“Latest album from Crud’s Link2Wales label; 20 Racine ‘The Album’.
Was bought unheard; I wasn’t expecting anything so melodic; really rather good! Weird mix of dark almost at times garage vibes but with all sorts of electronic throbs and pulses competing with the off kilter other room vocals.Its just £3.50; buy it!”
[Phil Newall – Louder Than War]

Compiled from two sessions recorded for Neil Crud’s TudnoFM radio show in 2017/18 – with three bonus tracks, I can, hand on heart say I fucking love every second of this album. And so will you…

There was a such a great response when 20 Racine recorded a session for the show last year that they have pulled three more rabbits out of their collective hat and done another one. We are blessed once again. Also we feature the new ‘Best of…’ compilation from Liverpool’s Antipop Records which is out now and called ‘God Damn! Where Did I Put That Noisy Muthafucken Compilation.’

20 Racine are a sound to behold… How could something this good have partly come out of Rhyl!?
Listen to a repeat of their recent session along with two hours of wholesome music for pleasure.

What can I say? 20 Racine not only pulled a rabbit out of the hat, they produced a warren of superb sounds that infuse dance rhythms with proper rock and roll to produce hypnotic, mesmerising and simply superb music. They formed in Rhyl as Hobo and moved to London in 2001, where they’ve been a side project of side projects that DJ Sid does. Enjoy!