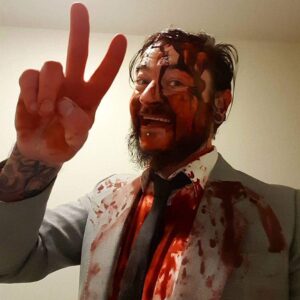 When Jxhnno is not tattooing any bare patch of (sub)human skin on any passer by in North Wales, he is grunting and fronting two epic bands… Entity and El Borracho. The latter of whom have recently released the pretty damn fine ‘Pinecone’ EP (read review). Check out his artwork at The Rogues Gallery in Bangor.

Best known for: My collection of Cornish pastie drawings from 1998

Current location: On the beach with a bottle of Delirium Red

Where I’d like to be right now: Watching cartoons in bed with a bottle of Delirium Red.

My music collection has a lot of… Room to grow, I’m picking up new records when I can, there’s an increasing variation on what I’m listening to, I’m sure it’s like that for a lot of people, people who share music with you are important to have in your life, unless they’re just sharing the same song over and over until you develop pigeon psychosis and fly off to London to buy a tracksuit.

Don’t judge me for…absorbing all the fun out of the room – if God had meant us all to have a laugh, then why did he invite me here.

Five albums that keep me alive and why:
If any music is going to keep me alive then I’m going to imagine it like being a shark, and you have to keep moving for that, so I’ll mostly pick whatever I’m listening to now…
Aldous Harding – Designer She’s incredible – This album has some beauties. The Barrel is a particular stand out song, but there’s so many other bits on her other works from over the years – hard to say that it’s an ‘album that keeps me alive’ but for sure Aldous Harding’s music has kept me fascinated with dreaming about life.

Melvins – Stoner Witch -Melvins have written about a million albums I think, I love so much of their music. Stoner Witch keeps part of me alive, the teenage me I suppose. I listen to this album more than any of their others.

Old Man Gloom – Zozoburn (live at Roadburn 2019) – This live album came out recently. I loved Christmas by Old Man Gloom when it first came out, and maybe I should have picked that – it reminds me of all the bands I was listening to at that time and bands I have got into since ISIS….Converge, Bossk… and all the other punky sludgy doom out there – and yet to come.

A.A Williams – Songs from Isolation – What can I say about the last year and a half, let’s not get started! This album is a sweet album of covers recorded over lockdown and follows from the incredible first album ‘ forever blue’. I don’t mind sitting around at home all day, but I want it to be my fucking choice ha ha ha! I got a lot of music written that I probably wouldn’t have done if I hadn’t been forbidden to go to work. I’d hope a lot of people have….we’ll see in the next coming months, hopefully people haven’t wasted the opportunity!! Actually ‘Forever Blue’ is a great album considering it’s her first LP.

Number 5…..hmmmm Tomahawk – Tonic Immobility – I was going to put “Brutus – Live in Ghent” because they are a superb band and I have found them really uplifting since getting into them, but Tomahawk recently brought a new album out which I’ve been listening to a lot and their past albums too. Anything Mike Patton is on my radar so I’ve recently got a new release by Mr.Bungle, as well as some Dead Cross too. As long as he’s about experimenting with music, you’re going to get artists like Greg Puciato getting inspired and releasing stuff like “Child Soldier…” 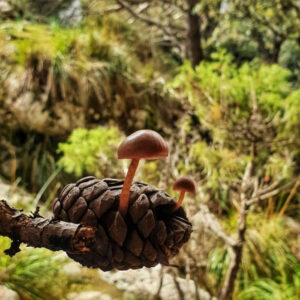 Swimming off the psychedelic Low Tide waters of Ynys Mon you’ll catch a glimpse of El Borracho as they hunt for the very rare seafaring psilocybin Pinecone. It’s a real catch, and once found you have to remove any parasitic Mosquita and leave under Skeleton Lock until the rainbow hours. This entity, often consumed with gin and tonic can give you a whitey but is worth the risk of going to insanity and beyond as it will have you dreaming of giving paper girlfriends an ever loving kiss under broken glass.

Of course, you don’t need to take my word for it… Check out the latest EP from El Borracho on Bandcamp right now – they just get better and better, and this is right up there…