Electric Deckchair is a double CD and it is the fourth release from this Welsh experimental trio, comprising of 2 guitars, drums, vocals, and may I add, the odd bad synth here and there. It is very much in a Velvet Underground/Syd Barrett style, and overall the compositions are simplistic in a way and seem to be aimed at anyone who can make sense of it. Both CD’s comprise of 5 tracks apiece, and both, in time length, come under the 50 minute mark. As a starting point I will say with honesty that Ectogram will certainly not be to everyone’s taste, mine included, and could indeed be termed as a very hard listen. Just for the record.

I will start with CD 1. The tracks are driven by noise, in a noisy way. They are badly played and sound almost jammed, in a bad jam way. However, after overcoming the initial sheer horror of it all, I recall that the bio stated that overall this release comes the closest to representing the bands live experience more than any other of their releases. So for me, the conclusion made is that I will definitely pass on witnessing one of their live gigs with my naked ears. However, casting my assumptions aside, the music itself has a few distorted elements of the above mentioned Velvet Underground/Syd Barrett, and also a slight angle of The Wedding Present in certain songs. Possibly Half Man Half Biscuit could also be mentioned as a reference to catchy, not as in a joke band, but overall it is an amalgamation of all these things and could be termed as something different. Ectogram play on the Interstellar Overdrive/Pink Floyd noise thing quite freely. It is oft manic, oft mellow, and it oft makes one think ‘what the f*** is this about?’ Vocalist & guitarist Ann Mathews dwells, and produces lyrical nonsense, and overall the first CD is what some might term abstract. CD 2 however is less noisy, yet it still does not make the music any better. CD 2 sounds more studio based, with the production being a lot better, even though it is just a cleaner version of noise. The above elements are still there and the lyrical waffle is still firmly in place. I will let the bio sum up what the sound is. At times evoking a sonic palette more reminiscent of an arms testing facility than a rock ‘n’ roll trio. 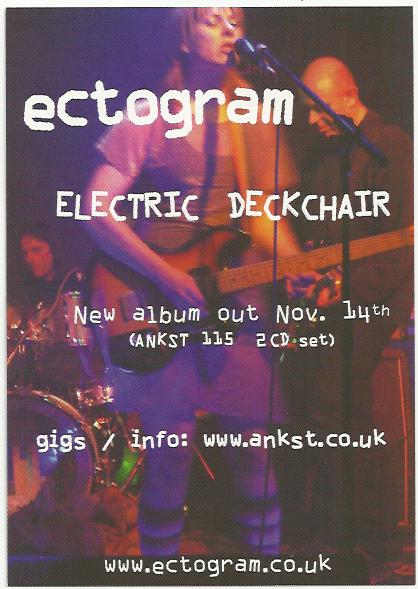