I received a letter this morning from a lawyer representing my kidneys, they were threatening legal action over the obscene abuse I subjected to them on Saturday. Had I also attended the Friday night session at Pigstock I would probably be in the bed next to George Best by now. I did fear for the organisers when I peered out of the window on the west wing of Crud mansions on Friday & see the heavens open. I thought of all the effort Jon, Vanessa, Huw & the rest of Denbigh’s Organised Crime Unit put into this festival each year, only for it to be washed away by an act of our Lord God. Thankfully, my fears were unfounded as the warm up evening was a huge, but very wet success, thanks to Hooper, MK Band (who went down a storm [sic]), Bleeding Hearts etc.

That severe bad influence on me, Andy Fatman offered me my 1st pint of the day on arrival at about one on Saturday afternoon & it was a slippery downhill slope for me then on. Thankfully it was a merry jaunt to the heights for almost everyone else, including Midlife Crisis, a band trying to come to terms with middle age by re-living their youth with a assemblance of classic tunes from years gone by.

Jamie Cardno, that ubiquitous strummer, drummer, juggler from Rhyl’s badlands gave us a quick 20 minutes of his renditions, including In The Summertime sung with a hint of sarcasm as the clouds threatened a Brut 33 style ‘splash it all over’ at any given moment. He was quickly followed by Denbigh lass, the very popular Sarah Davies whose left handed guitar playing & strong voice cut through the fine drizzle to much applause.

As always, you can sense that Pigstock are going to get the mix of bands spot on, perhaps a little too timid an event for a full punk rock assault; what with Denbigh’s nasty punk rock past & all that! But that sense of, ‘yes! they’ve hit the jackpot again!’ even this early on was being rammed home by The Loving Cup. The Connah’s Quay band have been steadily attracting a lot of interest from many quarters & I 1st heard them on Adam Walton’s Radio Wales show (Sundays 9pm). The cowboy clobber sort of gives them away plus all the horse shit backstage, but the obvious country & western feel has been mixed with an indie Charlatans stance making their music pretty unique, & when they kick, they go like the proverbial mule.

Being a two-pint-piss-fairy I had to make my 3rd trip to the bogs pretty soon. I do recall 4 years ago they had blue woodchip wall paper on the bogwalls – this year I’ll be able to boast to my hardened festival going mates that I pissed in festival bogs that had mahogany seats with gold plated hinges!! This could only happen in Denbigh!

To top this, & they call it surrealism; I see & hear a lot of bands – I eat, breathe & shit so much of it that I can snore a good tune; so inbetween bands, when the DJ played Since You’ve Been Gone by Rainbow it struck me that I’ve been to the 4 corners of the globe & back since I last heard this song, & that was 4 years ago in Denbigh Town Hall – I bet it was the same DJ aswell!

Kyla Brox gave us a blues-funk-welcome to Jazz Club (nice!) with an emsemble that resembled a Delerium Records photo shoot. Playing tracks off their ‘Belly Shiver’ LP Kyla’s voice pumped out that alcohol aided chilled out feeling, & even though Sanchos played the old festival trick of turning up late to get higher up the bill they too chilled to the mood. A 3-piece instrumental outfit that didn’t impose on you. Fatman slurred: ‘I listen to Placebo to see what’s in the lyrics & what’s gone into the music, whereas this stuff is non-committal, but fucking good.’

The softly spoken but much talked about Nick Harper (left) paves the way after Straitjacket (below) had untied themselves & escaped their padded cells for long enough to deliver a flawless set of punk and rock classic cover versions & well placed in the day. Now Nick is a genuine down to earth character with a classic album ‘Harperspace’ – he is Hawkwind without a backline of drums, electric guitars & topless dancers. Stupendous usage of effects made his acoustic guitar fill the arena, this was live surround sound. Top bloke & thoroughly recommended.

Festivals of course always run late, but I’m sure this was running about an hour & a half over schedule, not that any one was clock watching, they were too busy vibing down to the Muffinmen, the Frank Zappa inspired inventive mothers who continued the general theme of the day & jammed out their set. When I go to see bands I long to hear a guitar solo that lasts longer than 8 bars, so it was like musical notes from heaven when I got a solo that was actually longer than the band’s set!

Stirring Fatman from a Carling induced oblivion I suggested he earned his press pass & review Pocket Venus. This is what he had to say…

Making a rockstars entrance, what with Chris’ shades & Naldo’s erm, beard? PV take to the stage… what no polo necks? A blast through “Intro” brings us to “Sell Your Friends “, which didn’t grab me , at first, not like other tracks in their reportoire , now after a few outings, it can only be described as immense. “Get Away” still my favourite, is next, lifting this band onto the pedestal they could/should be on & we’re only 2 songs in, for fucks sake! “Make It Through …” still speaks for itself (an early kick off at the bar with the Crudster begs the question as to how we‘ve made it this far). The calm before the storm. The storm arrives by way of “Why”. The hairs start goin’ during the first few bars of “Fall Away”, this is music to fall in love to. As promised we were then offered last year’s show stopping “Ginger” (inspired by Chris & Maz’s daughter) Never played, scarcely practised, causing some pre-gig nerves earlier, it doesn’t disappoint this is P.V.. with a soft side, and leaves me thinking about Elise, my very own little ginger whinger at home (“no, I’m not cryin’ Neil, I have something in my eye”). “Like You” brings a death to the stage, Chris Yates’ faithful axe, the victim… he’ll regret that in the morning! “How High?” that question can be asked on many levels tonight and different people will give different answers, mine would be “not fuckin’ high enough!” 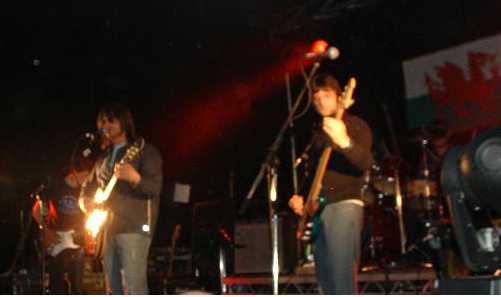 I’ve never been a fan of the Levellers, I was once mis-quoted in Metal Hammer magazine as saying I hate them, so I didn’t hold out much for Drunk In Public who are the Levellers unplugged. I was wrong, they were superb and everybody loved ’em & in the spirit of things chilled everyone out.

I’m sure it was about 11pm then & we still had the Blue Horses & Goodfellas to come! I then suffered black-out (c’mon, I had kept up with Fatman’s intake all day! And he was pretending to be a sea lion by now!), my memory is very patchy (I am honest, I could’ve made the last bit up), but I do recall dancing with the entire sell out crowd to Do You Like Good Music & I mean EVERYONE & basically doing the boogie with the crew. My next memory was waking up next to Fatman in the ditch by Colomendy roundabout! Sweet dreams…