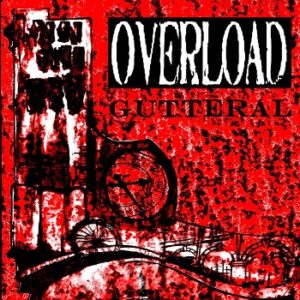 [review by the barefoot rascal]
Hailing from the city of learning that is Cambridge, we have street punks Overload. Being surrounded by all those students would make me pretty pissed off and that’s exactly what we get with this lot; angry and aggressive music.

This is their first vinyl output after a number of CDs, and they’ve dipped their toes into the vinyl ocean with a 6-track 10″ offering.
I’ve seen them play live a couple of times and they’ve been excellent, Teo is such an energetic frontman and the band blast along superbly. Could they capture that live feeling onto a record?
Yes they can. ‘Gutteral’ pulls no punches at all, straight from the off they launch into Lumpenprole and it’s clear where their musical influences lie as this sounds like Motorhead covering a Discharge song.
Violent Domestication has a more street punk style as Teo spits out his vocals. I’m not sure where he originates from but his accented vocals remind me of The Casualties in places. Side 1 closes with Noise, a mid-tempo grinder which reigns in the relentless pace of the first two songs but manages to sound just as threatening!
Side 2 opens with the superb The Future Is Over, brutal street punk with the chorus reminding me of Mexican punks Migrano Social. It segues seamlessly into 2000 Luddites which picks up the pace even more and is a proper slap to the face. The final track Congo gives you a brief respite with a great riff before that blasts off at speed with some proper machine-gun drumming before ending with that same great riff.
The only real quibble is the fact there are only six songs on this record, I wanted more!
This is a lesson in no-frills aggressive hardcore punk.  According to their Bandcamp page there are only 5 copies remaining out of a run of 300, so grab one quickly before they all go.
The Barefoot Rascal
29th October 2020.
EP Review – Froggy & The Ringes (in Soft G) NEW RELEASE – Skinflick – The Dead Evolved