Arriving fashionably two hours late to a gig, I was out fashioned by promoter Steve Rastin who fashionably started the show three hours later than the advertised time. This meant it was going to be a late one and there’d be a few lubricated heads at this charity event.
In an age where the bands quite often outnumber the audience it was great to see the ratio turn the other way tonight with little elbow room and plenty of ‘Oi, you’ve spilt my pint!’ kind of looks in a town that is generally like a scene out of Pulp Fiction.

Surrounded By Silence were late a addition, making this five band bill, and without checking my endless ‘bands seen’ list I’m unsure if we’ve crossed paths before. I kind of recognised the lead guitarist, and apart from the Boris Johnson lookalike on rhythm guitar, the rest were in full costume (be it batman, spiderman and twatman). Anyway, they were very messy, but fun, and even managed to destroy the drumkit in the opening song. Good voice on the singer, bit like Capguns and good that they steered well clear of that awful emo-filled style vocal that so many young bands feel compelled to do these days. Not sure what direction they’re heading (one ha!) – be it punk or metal, but it’s all good messy fun.
Garry Davies, Steve Brute, Nathan Page, Milton, Joe Hovis and myself slobbered after a threatened barbeque that never materialised. Our conversations must have entertained the overlooking police station next door, the warm summer evening gave us chance to stand outside in the Demilitarised Zone, catch up and talk bollocks between bands.

And the next band was Victim Of The System, who I saw last Sunday in Prestatyn amid a maelstrom of bad sound, of guitars too loud for the drums to compete and a bass amp that accidentally had the bass setting turned right down!
Tonight, despite the Argos end-of-line PA, the sound was much better balanced and VOTS (not to be confused with the band of dirty Deeside punks from 1980) played a great set.
This is to be their last North Wales gig for a while as they disembark to pill-popping Uni-land. They drive their battered stolen cars on the punk side of metal, with a good frontman, with good moves and more than capable of commanding the stage. And although they had a stand in bassist who made it up as he went along, I enjoyed it lots… 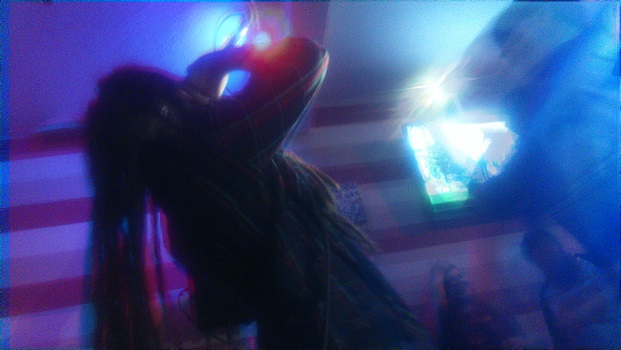 They must have put something in the beer as BBR went absolutely mental…! They too played in Prestatyn last week and also suffered the same objectionable sound problems. Tonight however, they ensured that tomorrow you’d be crushing nurofen tablets and shoving the powder in your ears in a bid to clear your head. Like Ste the bassist, they were BRUTAL, and it gets better and better each time. The floor shook, the ceiling shuddered and we were shellshocked… Excellent in your face, in your head, in your nightmare stuff… Looking forward to hearing their next recording session and contemplating heading to Chester on August 20th where they play The Compass.

I’ve probably said before that I’ve seen ArtisFiction weedle their way through various guises and sub-genres since their schooldays of wannabe cock-rock stars both on and off stage. And as a result I’ve never taken them all that seriously. Don’t get me wrong, Kickstart Kitty were good fun, but it wasn’t going to get much further than a giggle at Speakers Corner in Colwyn Bay.
Not only was I pleasantly surprised; I guess stunned would be a far truer account of how I felt watching ArtisFiction tonight. They were slick, uncliched and knocking on the door of absolutely superb. Cross genre songs executed far better than you’d imagine and the guitarist has gone from being a kid who’d fuck up a few times during their set, to an accomplished man who can make his instrument sing. Love them or hate them; and the camps are divided on this one, you cannot ignore this band.

Raising money for the Cancer Unit in Glan Clwyd Hospital, we gave generously, and it’s sad that while our government sells arms to countries to kill and maim people, that it’s left to charity to raise funds for worthy causes. One final cause tonight is Impaled Existence, it’s late and it’s also five to twelve in their career, as this is their swansong; their final gig. They’ve been going for an age (maybe a decade), when bands like Surrounded By Silence were still shitting their pants in the dinner queue. Impaled Existence are seasoned hardcore metallers, they are at the top of their tree. They have climbed all the mountains they need to climb and now they are making their descent. I left wearing their t-shirt, happy that I had seen their final gig… Good luck to whatever projects the individuals take on from now…