So you’ve been to school for a year or two and you know you’ve seen it all… We were having a bit of a Jellofeast in the tour bus as we fitted and spluttered up the motorways towards Preston, and despite not playing (or singing to) the said Holiday in Cambodia, that line hits the snail firmly on the head, squashing it into the pavement. I had thought I’d seen it all and yet Evil Blizzard took it all to another (sub) level, and this is coming from someone who’s watched Klaus Kinski perform a live orgy, Green Minge stain the reputation of live music, Anti-Nowhere League in their 1981 prime and Dave Cox standing on the edge of the stage taking a piss into the crowd during a Stuntface gig.
No… this was a spectacle, a jaw dropper, an OMFG experience. Louder Than War’s Phil Newall said, ‘Evil Blizzard were a truly mind altering insanity; four bass players (at one point 5 when some other bloke joined them), a singing drummer, alien masks, rivers of dry ice and sheets of doom rock collides with Hawkwind played at dangerous volumes!!’
I’ll be back to them in a bit… 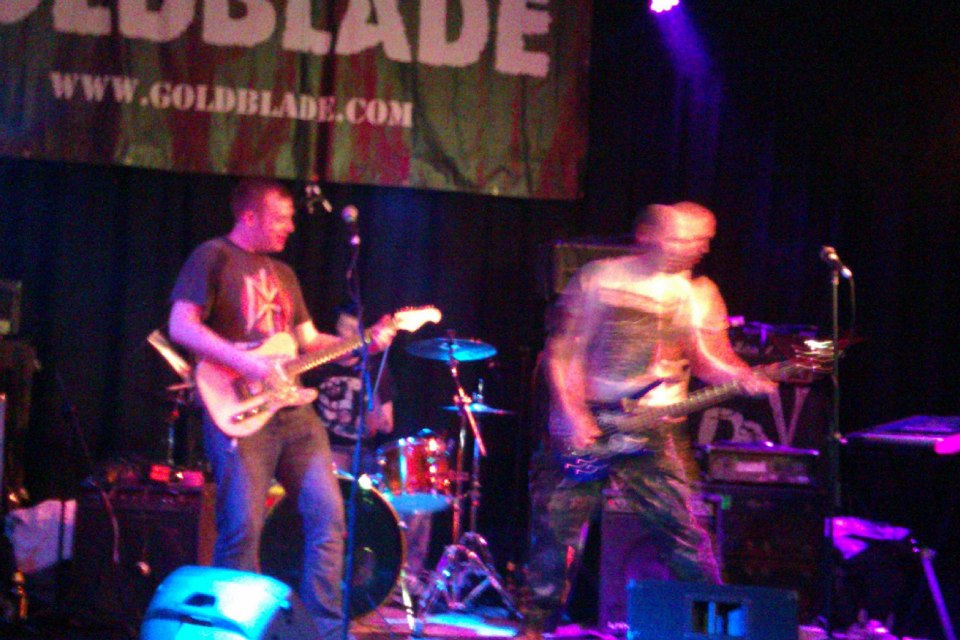 First up it was Braxton Hicks (pic by Emma Barry), pretty sad when I have to review my own gigs, but hey! It’s my band and I’ll type if I want to, and no other fucker will write about us! We came, they saw and we played conkers with the crowd. A decent enough set, plenty of mistakes from me as usual and plenty of good humoured banter with the locals, who seemed to like us… And a huge hats off to Rob Talbot, the promoter who made tonight, and many other excellent nights past and future possible at this great venue. Without people like Rob, events like these would not be possible; we’d be left with shitty pub gigs, awful tribute and covers bands or ‘big’ gigs where the money making whores take your wages. There is a need for venues of this size that are independent of any corporate pressures, they are perfect for bands of Goldblade’s stature, not just perfect, but an absolute necessity, and also a springboard for cruddy bands like mine who normally have to play those shitty pubs to 4 people (3 of them bar staff). 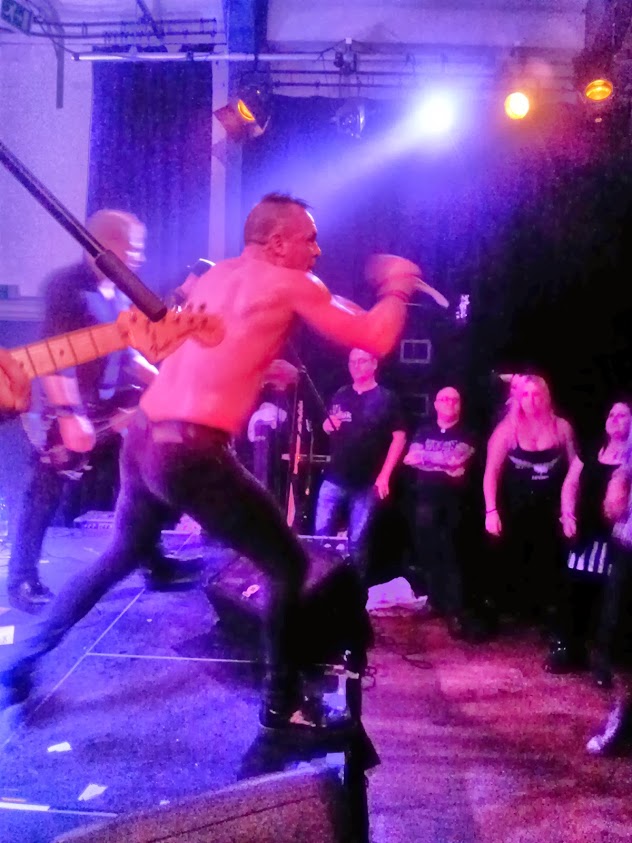 And talking of Goldblade, it’s not often they’re usurped by anyone or on anyone’s territory! But I think, myself personally (and a few others) were still in shock after watching Evil Blizzard. If you shut your eyes, there was no contest – musically, Goldblade mopped up and took home the trophies. Well into a UK tour (some dates where they upstaged the Misfits), John Robb and his brothers were battle hardened and they drilled through Fighting On The Dancefloor, My Name is Psycho, Strictly Hardcore, The Shamen Are Coming, Do You Believe in The Power of Rock’n’Roll – I believe…
I also believed in their new stuff, which was aired tonight and went down well, but we’ll have to wait another month before we can get our mitty grubs on the new album.
From the soundcheck to the encore, on stage – off stage you get 110% off John Robb, even doing psychotic on-the-spot running while soundchecking, arguing with the BBC on the phone, to engaging the audience throughout the set, to handing out flyers and swapping tales after the gig. 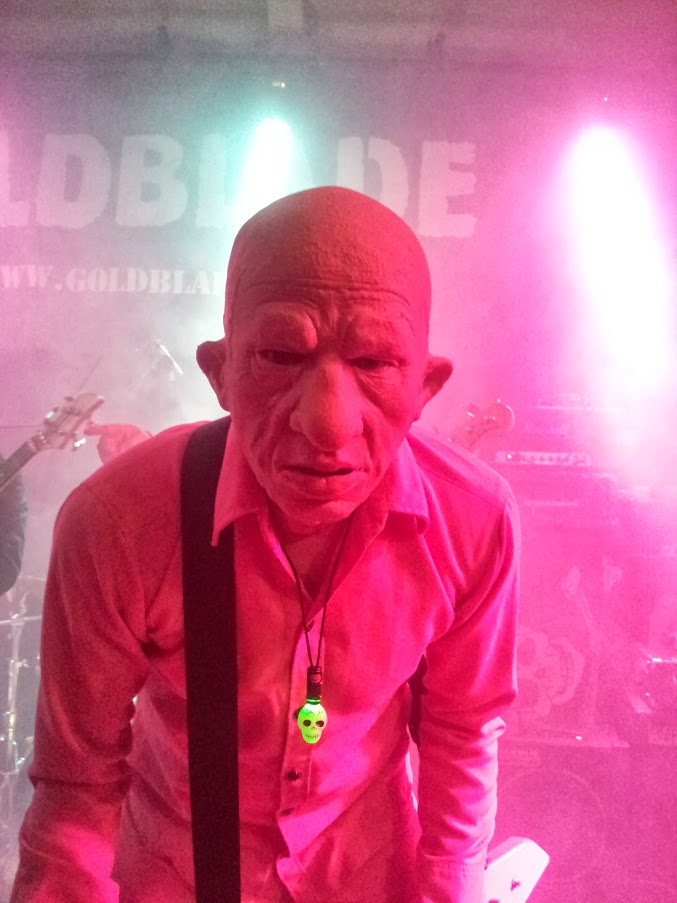 Under normal circumstances you’d have gone home satisfied that our monies were well spent on an entertaining show and skipped upstairs to tell the wife / husband / civil partner / detainee all about the ace gig we’d been to and how you got sweated on by Goldblade, how you sang ‘Fucking in the streets’ on the top of your voice and how you shouted ‘Knobhead!’ at Braxton Hicks’ vocalist. That would have been a musical feast; a feast of entertainment… But tonight, these were not normal circumstances, we did not feast, we gorged, we were force fed, we were tortured, our drinks were spiked, LSD was injected into our eyes, our cerebral cortex was chainsawed in half.
Evil Blizzard admitted themselves that in the studio, recorded, they’re not quite the same. That admission was during soundcheck, when these 5 unassuming everyday average looking blokes strapped up 4 bass guitars and began making simple, repetitive, spacey noises. Like Hawkwind / Kraftwerk / Here & Now – we counted 18 pedals and a battered keyboard in there too. It sounded good, it sounded promising. What we didn’t vouch for was the transformation when they actually alighted the stage for their set. Kitted out in pink boiler suits, a pink onsie and various masks portraying an androgynous mannequin to a filthy dirty old man – they were here to create a spectacle, musical theatre, leftfield art, chaos, call it what you want – but words do not do this justice. 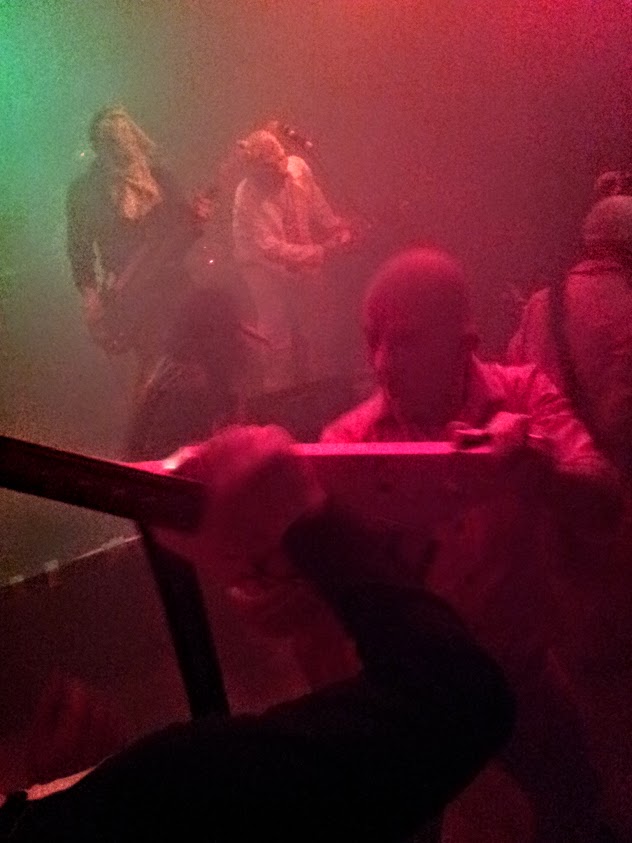 The music..? To be honest, I hardly noticed and I now understood why they’re having trouble emulating what they do live onto CD. It’s hard to put a spectacle on CD – maybe a DVD would be better. It’s sexy in an asexual way, it’s scary in a Scary Movie way, it’s an acid attack of the senses, it’s a slapped up crack whore on Snog Marry Avoid, Evil Blizzard are the Swarfega you’re rolled in before your decomposing naked body is wrapped in clingfilm and displayed at the Tate Gallery… You have to see to believe….
I Believe…