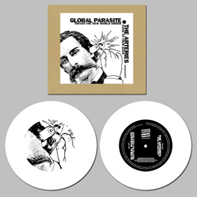 I’m getting into the swing of heading over to these events in the Bay; they kind of have replaced the old West Shore/Old Hall events of olde. Maintaining my ethics I have replaced my pissed up bike journeys with similar ones by train, though the time of the last one back doesn’t allow seeing things through to the end unfortunately. Still, the entertainment is quality not quantity, and the Imp’s spirit measures and prices (quantity over quality) are a dangerous bonus!

This is billed as a launch night for Global Parasite’s split 7” on Complete Control, a bargain at £2 and even more so as there’s a free DIY DVD of Alex Jones latest documentary film thrown in. Become the media indeed.

Unfortunately Officer Down have dropped out like a cop being investigated for corruption, due to the old sick drummer chestnut. Like being sick WHILE playing ever stops some people 😉 So to start we have the not so local (Kent) Local Madman, “fresh” on the back of a 6 hour drive. They don’t have a bassist, except they do as I learn after that the bassist has actually switched to guitar as they were fed up with twiddle merchants. His playing gives an interesting style to their aggressive hardcore, some atmospheric breaks amidst the intensity making me think of His Hero is Gone. The vocals are ENT influenced dual hi-lo screams but from one guy. He gets his cock out, maybe he’s heard it’s traditional in these parts, but I don’t think it impresses the local ladies as much as their music…

There’s an interlude of spoken word/humour from the renowned Tinman next, but it really struggles to come across through the PA which is a shame. However what I do pick up on his gayness (or not) and encounters with those upstanding (as in pricks) representatives of North Wales Police is amusing, and fair play to having the balls to do this alone, at least among friends.

British Rail is calling with their innovative “can’t be arsed driving train all the way so here’s a bus to squeeze on” policy so this time I have to miss the Parasite. Listening to the single later confirms they are still hitting the spot with their fierce, message driven hardcore., and on the B-side The Arteries’ Propagandhi-like angry melodies complement it well.

Garry Denbigh Dog says, ‘I’m pleased to confirm that GP played a blinder and it was a mad gig!’