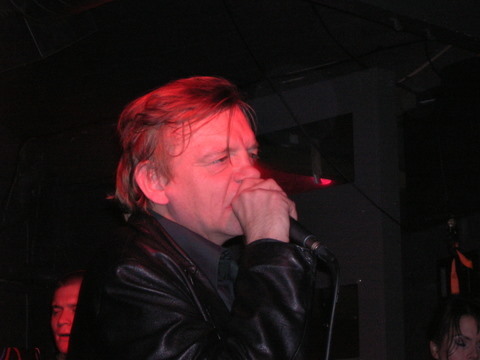 Got into Sheffield just after 4, far too early, but I thought I’d better get my bearings and find the Boardwalk, as well as the Three Cranes pub, where we all were supposed to be meeting up pre gig.   It took me a further hour to find the venue, after asking a couple of helpful ‘City Ambassadors’ they sent me on my way with a map.  It was a further 20 minutes, and seeing some poor woman relieved of her large Argos bag by a smackhead before I found the Three Cranes, by which time my extremely unfit calves were on fire, and I was coughing like a bastard.  Only to find it was closed!  I felt like collapsing on the doorstep.  A security guard a few doors away informed me that it doesn’t open weekends!!!

I rang Toby, and I was designated to find a suitable alternative, and ring him when I had.  I staggered across a pub called The Bankers Draft, rang Toby, and then sat there getting quietly pissed on my own for an hour and a half.  Whilst receiving filthy looks from groups of people huddled on small tables while I sat at a large one alone.  Turned out Max had been in there for a while too, and I only realized it when I got a call saying he was there, wearing shorts.  I’d seen him about four times!  Anyway, it wasn’t long before Phil the Pharmacist turned up, then Steve H and Toby.

Got to the venue ten minutes too early to catch the end of Safi Sniper (someone who thinks it’s cool to play about with Barbara Streisand and Freddie clips, whilst making you hark back to those days of solvent abuse)  the place was rammed!  It was a fookin’ fire hazard!

Mark E Smith seemed to take ages to come on stage while the band played the opening number ‘My Door’.  But when he emerged to rapturous applause he was on blinding form, and looking pretty well I thought?  He now has two bass players; I’ve never been into that.  It reminds of Ned’s, but it really works!

Highlights, for me, were ‘Blindness’ and a new one ‘Reformation’, I’d only heard the latter on Youtube, and when I heard it for real?  It was like, wow!  I must have shouted “fook me!  Fook me!” about twelve times!  Well maybe not that many?  But quite a few times?  I had a brief chat with Tim Pressley (guitarist) afterwards, who was lovely. As well as telling me how sober and well behaved Mark E is, for now!

I’ve never been into Americans in The Fall, except for the lovely Brix, but I hope this new line up will last.  They’re at Boddingtons Brewery in Manchester next month by the way!