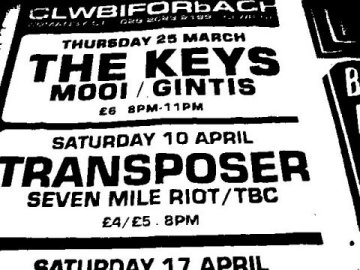 It was the morning after the BBC Radio Wales broadcast from Blu and, as I made my way to the Gintis household, I felt a little worse for wear. That night Gintis were supporting The Keys at Clwb Ifor Bach in Cardiff and armed with my camera and notebook, I intended to write some kind of review. However, it is all very well making copious amounts of notes to aid the process, but I have since read them back and they largely make no sense whatsoever. The “men” loaded up the minibus. I was sure they didn’t know what they were doing. This was confirmed when Dave Gintis (Mastermind Specialist subject- Orang-utans) was observed standing waiting to put a tyre that was clearly too small for the minibus onboard. We were eventually ready, but two things concerned me. 1) I was sat downwind of Carl Gintis (Mastermind Specialist Subject- Rocky 1-3) and he’s had a Mamaris Special Burger the night before. 2) Would the combined weight of our packed lunches slow down the minibus?

The five hour journey was trouble free and largely consisted of Carl and myself singing very loudly to some amazing mix tapes (I made them), although Dave did make a fantastic discovery- I had banged my leg in sainsbury’s car park and was sporting a large dent in my leg. Therefore, Dave observed, I must be made out of the same material as a car. Genius. I ate my own weight in sandwiches. Joe Gintis (Mastermind Specialist Subject- American Orang-utans)’s mum makes cracking butties. Dave had thoughtfully brought a magazine featuring only tits and football, whilst Dan (Mastermind Specialist Subject- Liverpool Football Club) opted for the less misogynistic choice of the NME.

The line up for the gig was Gintis, Mooi and The Keys. After the sound check it was announced that Gintis would be going on second, with Mooi opening. When Mooi started it was clear that this was for the best as their chilled out style may have seemed out of place in between Gintis and The Keys. Similar to Zero 7, Mooi consist of two female vocalists (both ex-Furry Collars), acoustic guitar, cello and some kind of keyboard (technical term). It was an extremely relaxing and excellent opening set. 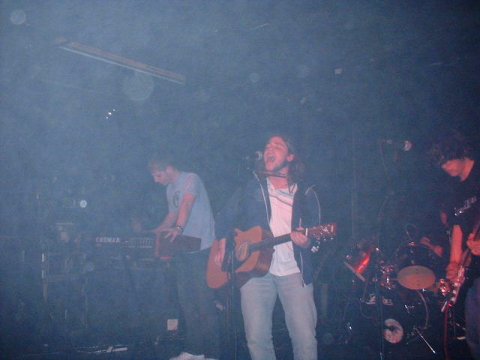 So Gintis were up next. The crowd was a lot older than that of Blu, though the band weren’t able to see them due to the lights. They played the same set as they had the night before but it sounded a lot better. The crowd definitely enjoyed it, with sporadic dancing , rapturous applause and shouts for more at the end of the set. 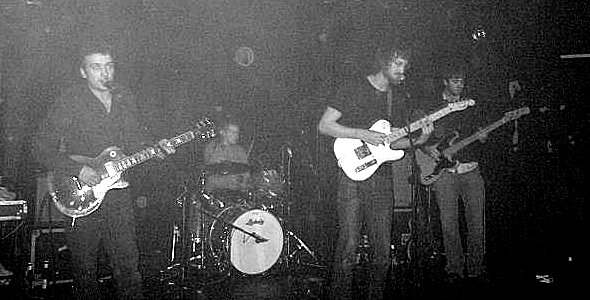 I hadn’t heard The Keys before tonight, I had only heard Carl banging on about them and had read a somewhat disparaging NME review of the new single “From Tense To Loose To Slack”, which dismisses them as Coral wannabes. Their set was fantastic, although by this point I had consumed a large amount of Vodka, lime and lemonades and my notes make no sense whatsoever. I managed to decipher some of my scrawl and it says “Smells Like Death”. I do not know what this is referring to and nor do I wish to find out.

So we began the journey home, first stopping at a service station for supplies. Joe purchased a loaf of bread because “I panicked”. Dave was convinced that he was going to watch Dawn of the Dead at 10 am when we got back and eventually hysteria through exhaustion set in and even Carl’s jokes were funny.