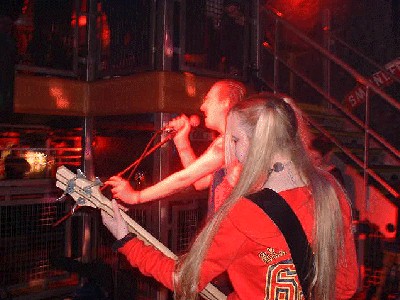 ‘At the end of the day I don’t wanna believe it.’ Is the hook line in the chorus of Skinflick’s Belief, their final song tonight & also the highlight of their sneaky preview CD.
This unusual setting of a nightclub to host a gig was a warm up to a set of upcoming dates in the UK from Bangor’s master of noise metal meets your drunk mother in a dark alley posing in an un-natural position for a local glamour photographer. There is nothing nice about this band, nothing to skip through the streets & rejoice to sweet baby Jesus, this is Skinflick & you’ve just been flicked from the face of this two-faced planet. Granted, we needed a warm up in this sub-zero club but all we got was a cold stare from main man Justin with a voice to chill your mortal soul.

Once called The Normandie Barrels is an unlikely setting for any band, & Skinflick 1st played here 10 years ago & were quite bemused to be here again.
The bare footed Justin (that’s where the Sandie Shaw puns stop) sporting a white vest & tattoos, wouldn’t look out of place in a suit has gathered musicians around him to take his music from the studio & onto the stage, they don’t carry the same nonchalant confidence as he but still look the part.
The show was a bit like buying a new CD of your favourite band after initially hearing it on some crappy tranny radio, you couldn’t wait rush home & play it at full volume on your state of the art stereo. Skinflick tonight played through a small PA – next month they’ll be blasting through the speakers at the Breeding Ground. Can’t wait.