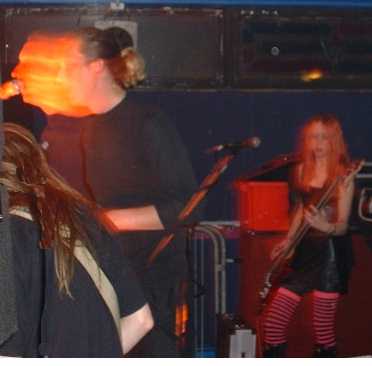 (reviewed by The Goth & Neil Crud)

CRUD: The last time Wayne & myself set foot in this venue was on Thursday 28th April 1988. We were in 4Q at the time & we started proceedings before Y Fflaps & The Membranes finished the night off. I think even the décor might be the same 15 years on, but we were lucky tonight to even take in the wallpaper as the 4 doormen first refused us entry for not being students. A little negotiation & a nod from Justin Skinflick ensured we plus Andy Fatman, Steve Sync & Pete Alien eventually got in. 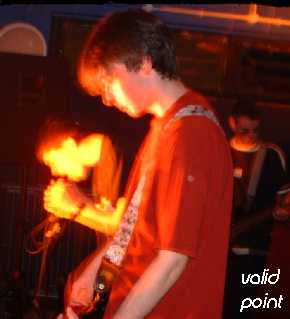 GOTH: Yet again I arrive too early & spend the next hour wondering if this cute lil’ room will fill. Semi-satisfied with the tidy turn out I take my position for Valid Point. Not even a bar into their 1st tune & Steve on vocals has already dislocated his neck with an over enthusiastic ‘mosh-ya-man’ freak out. This led me to believe Valid Point are used to end of school year concerts & garage parties, & by the 3rd number I was getting into their Glassjaw / Taproot combination. The vocals felt raw & the drumming was intense & although the band offer nothing new, the tunes are good, but please lose the cover version coz it was shit. Also my advice to Jamie on bass & Lee on guitar, an audience would like to feel your stage presence & see you moving & enjoying your own music. As it stands, you look rigid, but if you loosen up, your audience will feel your music better.
The twisted vocal styles, pink haired female on slap bass & ‘fuck you all’ feedback grasped me firmly in the demonic clutches of Skinflick & I was soon sacrificed on the alter.

CRUD: They are dark and menacing, they syringed the life-blood out of Nine Inch Nails & left it to fester on a petri-dish in the Skinflick laboratory. Animated yet rooted to the spot with a spotlight in his face, JW Hate (Justin to his mum) has an air of nonchalance about him yet is still intense & with a perfected backing he has every right to be suave about what he does; even if he looks a complete twat with that moustache!

Only Andy Fatman was disappointed by the end of the evening having missed the show after earlier being raped by 2 bottles of red wine, half a bottle of Absinthe & 6 pints of lager (I kid you not), he was at the gig, but only in body, his soul was swimming around the urinal bowl. It was however a well turned out evening for a windy Wednesday night in Bangor, where even Celene made the effort & cycled all the way from North Carolina to see the band (Ok, so I kid you a bit – she flew from there & cycled from Newport).

Kicking in with the latest single Two Ton Loser you are immediately aware that Skinflick mean business; this is the same band that crushed my ear-drums on CD & I’ve seen them before when they were still dabbling with a live sound. This time there’s no denying their intent & the NIN tag does not do them justice, I’m just shit at adjectives. Whereas Trent Reznor was very anal about his work, Justin will just fist you where the sun don’t shine as he rips into Burns Bright. A rubber clad bassist who delicately picks at her strings & a guitarist with more pedals than a Ford production line, pain to keep up with a ferocious drummer & ending on the B-side of the single with Belief, we too believe in the Church of Skinflick

Just had time for a group photo before we sacrificed Goth.