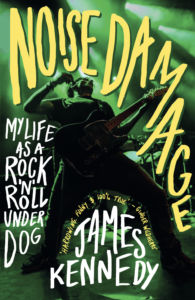 James Kennedy played in a band called Kyshera from South Wales. They ripped stages apart with their one hundred percent one hundred mile-an-hour performances… Genre-less, insomuch that they played this crazed skewed Zappa-like, Muse-like, rock-punk like, orchestra-like noise that formed their debut album ‘Made In China’, they were out there on their own. When you put too many colours on a canvas it turns grey, it blurs the eye. Kyshera were clever enough to fill the sound spectrum without clogging it. It’s a masterpiece, as were their two follow up releases. END_OF_DOCUMENT_TOKEN_TO_BE_REPLACED