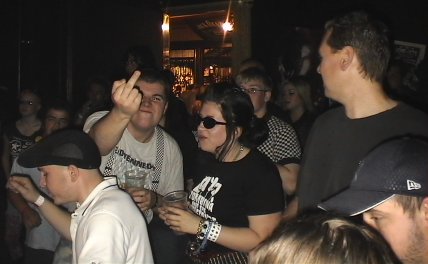 The Cob & Pen is a popular pub in Rhyl, ‘a local’s pub’ – it was previously however a renowned hardcore punk venue called The Dudley.
The Dudley Arms in Rhyl has a long history and was built by the Great Western Railway Company in the early-mid 1800’s. It was also hosting live music as early as 1898; the Rhyl Record and Advertiser described a Smoking Concert held at The Dudley in December by members of the Rhyl United Football Club, when a very enjoyable evening was spent.  Smoking concerts were very popular during the Victorian era, at these functions men (only) would smoke and speak of politics whilst listening to live music. END_OF_DOCUMENT_TOKEN_TO_BE_REPLACED