Machine Records – Cardiff based CDr label formed 2001 focused on glitchy, leftfield, and experimental electronica. Run by Dan Haines (ex Stereo Minus One) and Alex Collins (of Erin), by 2005 they had become a ‘proper’ label and rel a 12″ EP by Orcop, followed by Redfalls. By Mar10 by had amassed 48 releases (website)

Mad Dog – (Jul69-1970) Chicago style Penarth Blues band. John Ingroville (voc) (ex Flood), Paul Stewart (drms) (ex Flood, later Good Habit), David ‘Batman’ Goddard (bass) and Cyril ‘Cid’ Petherick (gtr) (both ex Music Machine and Backbeats). Dave quit and was replaced by Ian Stuart very early on. Most noted for their extraordinary improvisational skills, the band rapidly developed a cult following. This band more than any showed the undoubted vituosity of Cid as one of the outstanding guitarists of his generation. Folded in the summer of 1970 when on the verge of TV appearances and substantial tour plans. Ingroville later front the band bearing his name. Ricky Lewis (bass) (ex Rocking Jays) was also involved at some point 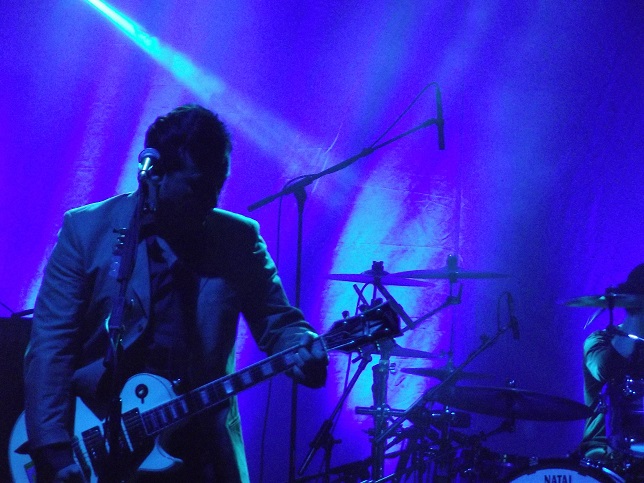 Manic Street Preachers – Blackwood based punk band, formed 1987; feat; James Dean Bradfield (voc,gtr), Nicky ‘Wire’ Jones (bass), Sean Moore (drms). Also still regarded as a member of the band – Richey James Edwards (gtr) despite his unknown whereabouts after his 1995 disappearance. Orig called Betty Blue formed by Nicky. Debut self-financed single Suicide Alley. Signed by Damaged Goods in Jan90 and released EP ‘New Art Riot ‘. By Aug90 they signed Heavenly and rel 2 singles Motown Junk and You Love Us. 21.05.1991 The Manics signed to Sony and in Aug rel Stay Beautiful. Debut album, ‘Generation Terrorists’ (1992) selling 250k copies worldwide. Their first Top 10 entry with Suicide Is Painless. Jun93 ‘Gold Against The Soul’ LP was released. In Aug94 Richey having suffered from ‘nervous exhaustion’ was admitted to a psychiatric clinic just before the ‘The Holy Bible’ LP was released. Feb95 Richey suddenly disappeared. After consultation with Richey’s family, the band decided to continue and made their live comeback on 29.12.95 supporting the Stone Roses. Apr96 A Design For Life went straight at No.2 in the charts and 20.5.96 LP ‘Everything Must Go’ was released. Feb97 the band picked up the Best Band and Best Album at the Brit Awards. Their album, ‘This Is My Truth, Tell Me Yours’ rel Sep98. Both LP and the single If You Tolerate This Your Children will be Next both went to the top of the charts, followed by high placings for consecutive singles. A ‘time out’ gap was filled by another No.1 with the ‘back to our roots’ single Masses Against The Classes, before the critically slated No.1 LP ‘Know Your Enemy’ was released. Rel Greatest Hits LP (2002) followed by several albums listed on better sites than this one…

Master of Nothing – Pontypridd based hip-hop/house project by Emyr Williams (since 2002). Rec EP and played Swansea Uni.

Cerys Matthews – former vocalist with Catatonia. Seen performing 3 songs at Llandaff Studios (Jan 02), got married, had baby and rel solo LP ‘Cock-a-Hoop’, also appeared on TV show I’m a Celebrity Get Me Out Of Here.

Mayonnaise – formed 2001 in Newport. feat. Peet (vocs, gtr), Biff, (bass), Paul (lead gtr), Dave (drms). Named after a Smashing Pumkins song, although they sound nothing like them. Played around Newport and the surrounding area until they split when they went to uni in 2003. Played at the Jon Lee tribute gig.

Mclusky – Cardiff punk band feat; Andy Falkous (voc,gtr) and Jon Chapple (bass). Prev called Best until Jon joined in 98, They claim to take their influences from Fugazi, Pixies and Steve Albini, and their gigs often ended up as feedback frenzies, trashed guitars and crawling off stage. Rel single ‘Joy’ on Fuzzbox recs, debut LP ‘My Pain and Sadness is More Sad and Painful than Yours.’ After 2 singles for Boobytrap recs they signed to Too Pure recs early 2001, and went to Chicago in May to record their album with legendary producer Steve Albini. The LP ‘Mclusky Do Dallas’ Apr 02. Matt Harding (drms) left Jun03 (now of Transposer), revisted Albini’s pad to record 3rd LP ‘The Difference Between You and Me is That I’m Not on Fire.’ Band split Nov04. Reformed in 2014 for occasional one-off gigs with Damien Sayell (St Pierre Snake Invasion) on guest vocals. See now Future Of The Left (website)

Meltdown – Promotion company orig based in Clwb Ifor Bach between 1990-1998, and put on gigs by many of the blossoming Welsh talent such as the Super Furry Animals, Catatonia. After a 4 year absence “to let Cool Cymru cool down” Meltdown returned with gigs in Cardiff’s Journeys.

Mentally Penetrated By An Acid Enema – cult-horror B-movie zine created by Gareth Tidey and Leighton Phillips, ran from 1991 to 1994 with 6 issues all selling out. The content was OTT genre fare, with articles and reviews on hundreds of cool and crazy exploitation flicks. Cult directors like Richard Kern, Jorg Buttgereit and Alex Chandon all got interviewed in the hallowed pages; lots of new friends were made and a lot of good press was had. The fanzine was relaunched in late 1994, renamed Channel Zero

Bryn Merrick – (12.10.58 – 12.09.15) best known as bassist for The Damned, joining them in 1984 before they signed a worldwide deal with MCA. Had previously played in Victimize with Roman Jugg, and Fairground, also Missing Men, Storm Queen. After leaving The Damned in ’89 he joined Phantom Chords for a year, also played a one-off gig with Stiv Bators on 01.9.89. Lived in Cardiff and disappeared off the radar until 2011 when he joined The Shamones. Sadly lost a long battle battle with throat cancer and died at Llandough Hospital aged 56.

Metronome Distribution – formed Jun02 to distribute classical, jazz, folk, world, childrens’,spoken word, CDs throughout the UK. Now distribute 25 labels from all over the world in the UK. The team is currently five people led by Carl Wade. It was born from the Metronome Recordings Ltd production company which specialises in classical and Jazz music and whose productions you can look at this website They were fed up with poor distribution through the major distributors and set up our own operation.

Moira and The Mice – Cardiff band (formed 1979) who should be credited with opening up many South Wales venues to bands playing original material, previously available only to covers bands. Feat; Moira Thomas [Moira Mouse] (voc,gtr,harm), Brenda Davis (b.vocs and Mousette dancing), Debbie Debris (b.voc and Mousette dancing) (later Bomb and Dagger), Rob Brazier (gtr), Lewis Mottram (bass), Mike Southern (drms). Debbie left in 1980 and was replaced by Linda Jane Holmes. Linda left in 1981 to become an actress in Coronation Street and Emmerdale, amongst other things. She, in turn, was replaced by Hilary Wyman. Lewis also left in 1980 and was replaced by Andy Gibbon from Cwmbran. The songs, written by Moira and Rob, were invariably 3 minute gems. Many of the best were never recorded, although a few live tapes remain. Rel 2 singles, “Sight And Sound/Gimme Pleasure” (1980) (a fave of John Peel at the time) and the Hysterical Outbursts EP in 1981, both on the band’s own Rodent Recs .The latter featured “Hysteria” and the extraordinary “Heart Like A Whore”, both live faves and still well remembered by the Cardiff gig-going public of the time. The few cover versions inc “Mony Mony” and the showstopping “Leader Of The Pack” , which many people remember feat a motorbike on stage! Not surprising really, considering the noise the band could generate in tiny places like the Lions Den and the old Chapter Bar. When they announced they were to split in Summer 1982, a sequence of storming gigs culminated in a sell-out show at the Cardiff Top Rank in July. The size of their following shows how unique they were in South Wales at that time. Rob’s brother Chris played in Zipper, Nylonz

Molotov Promotions – company (2002), set up by David Raybould to promote gigs at Pulsars in Caerphilly.

Mortal Danger – orig name for Headcase Ladz (1989-91). At the end of 1989 there was interest from Music Of Life recs and and with the help of DJ Leader 1 (MC Dukes DJ) a track called “No Retreat, No Surrender” was produced. It was never released.

Morty (Gareth Mortimer) – vocalist with Racing Cars. Wrote the hit ‘They Shoot Horses Don’t They‘ along with Graham Williams. Toured the States with Tina Turner, recently rel new album on the dA label ‘ Bolt From The Blue’

Stuart Moxham – former member of Young Marble Giants and The Gist (read relevant entries). In 1991, Stuart compiled the best of his home recordings on an LP called ‘Choice.’ He pressed up 50 acetates and gave them away to friends, relatives and record company contacts. A fan sent a tape along to John Henderson, a huge YMG fan and head of Chicago label Feel Good All Over. John offered to release the Choice tracks on CD. After a few additions and deletions, a CD ultimately came out in 1992 under the name ‘Signal Path.’ Stuart has since released 4 additional albums (Random Rules, Cars in the Grass, Barbara Manning Sings with the Original Artists, and Fine Tuning), produced tracks for Lois, Beat Happening and The Coctails, and made three trips to America to play live (in 1992, 1993 and 1999). He has also appeared on the 6ths Wasps’ Nests album and collaborated with Louis Phillippe and Etienne Daho. The latter had a French hit with “Paris Le Flore,” a cover of the Gist’s “Love At First Sight.” Most recently, Stuart has been writing and recording children’s music, including a session at Abbey Road Studios in London. He lives in the suburbs outside of London with his wife and three children.

MS1 – venue in Cardiff, part of Coal Exchange, Shut down within a year of opening (2003) due to health and safety, inprocess of finding new owners.

Multi-Storey – Yes copyists who rel studio album in the late 80’s. Gigged regularly around S.Wales and have recently reformed