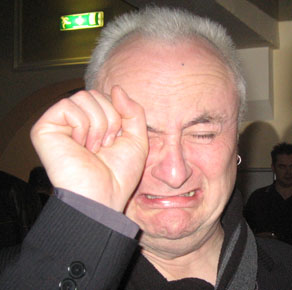 Keyboardist with early Rhyl punk bands Stripey, Amsterdam, X Men, moved to London (1981) Joined the Berlin Blondes (signed to EMI & toured Europe & UK). Met up with fellow ex-X Man & Grids member Pete Picton to form Shazam in London -a sort of Erasure meets Dexys band,signed but nothing came of it. Did session work in London (including a stint with First Hand Fury at the Marquee) & eventually moved back to Wales to build a studio & be managed by Pete Buckle (Nigel Buckle‘s stepdad). Wrote pop songs for a year & also formed a band called the Tuphelo Torpedoes with Gareth Gaz Top Jones.
Early 1990 Steve got a call from Nigel Twist asking if he would join the Alarm thealarm.com as Mark on keys was off to do Sinead O’Connor.
He did the European dates of the Change tour finishing at Pontins, Prestatyn playing the Flood Relief gig. That same year he & Mike Peters played the Radio One roadshow in Llandudno and even played for The Queen in 2003!

Continued to work with various Alarm lads after their split. Wrote dance tracks with Twist in San Francisco in 1994,toured the UK twice with Dave Sharp The Official Dave Sharp Home Page2 & scored strings for a Mike Peters show in Italy.
Also appeared at the Gathering 2001 with Mike in Llandudno. Album “The Mood Machine” written with Peter Coyle (Lotus Eaters vocalist) is out on Pete’s own label with an E.P.released on KnowItAll Records in the USA (2003) .

Joined Kirk Brandon’s Spear of Destiny ::: KIRK BRANDON ::: in 2002 touring the UK and recording “Dutch Masters2” and “Loadstone” to be released Autumn 2004.