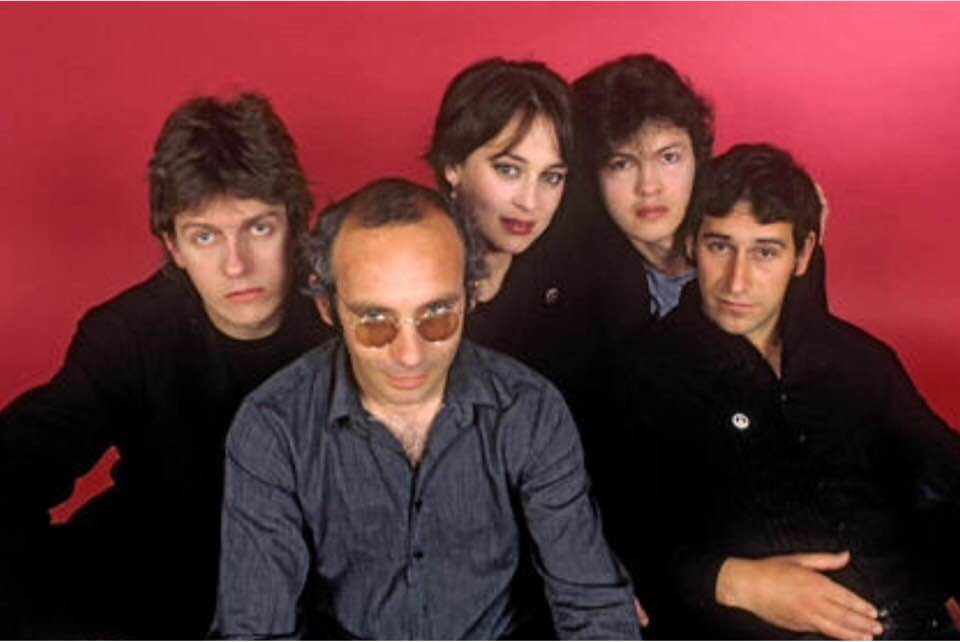 Another week and sadly another tribute to someone else we have lost, these shows are unfortunately becoming eulogies  – and tonight we’ll celebrate the music connected with John Lovering (pic above 2nd right) of Bangor new wave bands Hot Water and  Fay Ray who sadly passed away two weeks ago today.
Formed in 1980, and originally called Fay Ray & The Rubbermen, they featured ex-Hot Water members, Sheila Brook McCartney (voc), Owen Hughes (drms), John Lovering (gtr), Jeff Taylor (sax), with Tony Travis (bass). They worked with Nigel Gray (producer for The Police) and released a 1980 single Family Affairs (Surrey Sound) and an LP ‘Contact You’ and single Heatwave (both 1982 on WEA). Tonight’s show has two songs taken from a live performance in front of the cameras for a TV programme over 40 years ago called ‘Something Else.’ The other two songs were recorded at Cob Records in Bangor in 2010 (the shop that drummer Owen ran).
Fay Ray were staples of the Tuesday Rock Nite at Plas Coch in Bangor and also supported Killing Joke in London (29.05.80).
John Lovering, a guitarist who looked like Robert Fripp, was a college lecturer in Bristol. and became a Professor at Cardiff Uni and one time advisor to the Clinton administration (Eastern Europe expert)!
Seek out their album on vinyl, and recently reissued on CD – the singles are knocking around too on eBay / Discogs.

Saddened also to hear the news that Pamela Rooke AKA ‘Jordan’ the Queen of Punk Rock & 70s fashion icon, such sad, sad news, true icon – that vision of seeing her perform Rule Britannia in the film Jubilee will forever be etched on my brain. And I know several people connected with Louder Than War, like Phil Newall and John Robb have also lost a friend…

Neil Crud on Louder Than War Radio 09.05.22 (with Grant Sharkey in session)