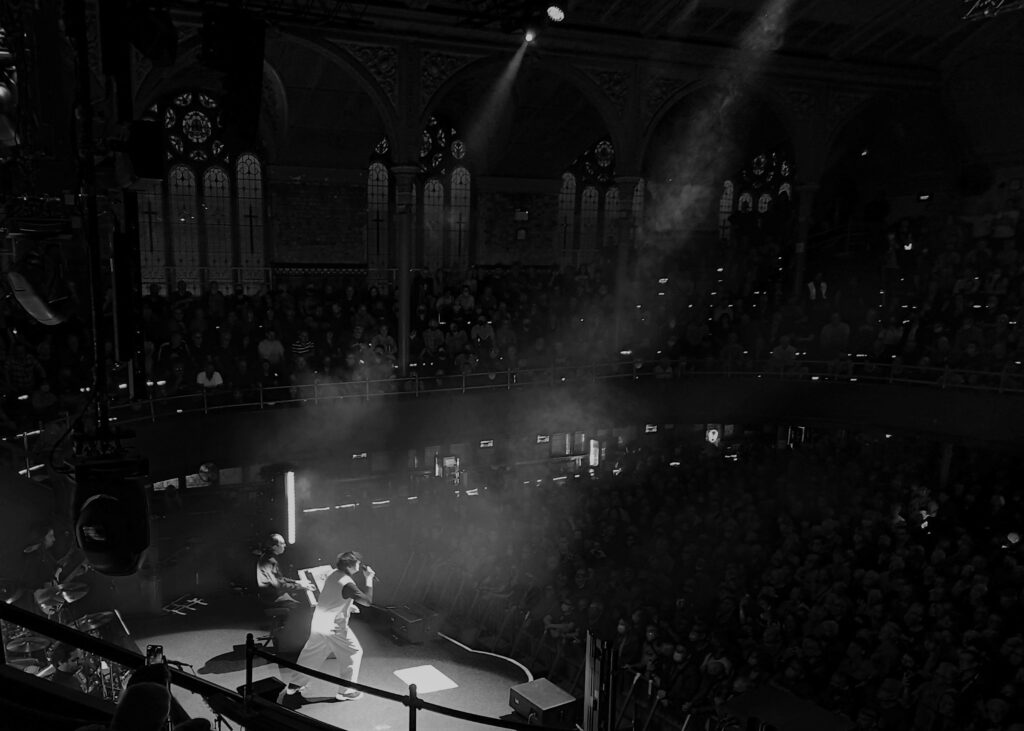 Someone couldn’t go and I ended up with a ticket and hotel room and watching Sparks at the magnificent Albert Hall in Manchester. Plus the added bonus of being chaperoned along the M56.

Sparks are not a band I’ve paid much attention to since being scared to death as a schoolkid watching Top Of The Pops. The image on Ron Mael’s staring eyes and inscrutable countenance as he sat rigid at his keyboards would leave ‘us kids’ terrified. His Adolf Hitler ‘tache and flick had you both laughing and being scared at the same time. His younger brother, Russell would be prancing about the stage as they mimed Beat The Clock.

Fast forward 40 years and little has changed… Ron and Russell are now 76 and 73 years old. Ron has warmed slightly, ditched the Hitler ‘tache for a pencil version, and shows signs of being almost human. Russell is still prancing and pirouetting (tho’ they didn’t play Beat The Clock).

Apart from the obvious This Town song, I think I barely recognised another old hit and something off the new album ‘A Steady Drip Drip’ that’s been receiving airplay lately. That’s no reason to not enjoy the show… I loved every second and every element about it; from the secret bar tucked away at the back of the balcony, to the extended ovations from a rapturous audience, to the choice of songs from a back catalogue that spans half a century.

That’s right… Sparks began at the start of the 70s as Half Nelson, and delving into that era, it’s evident they were out on a limb musically, and have kind of stuck to it and let trends find them rather than the other way.

One funny anecdote, I always assumed they were German band…!!! Ha…!