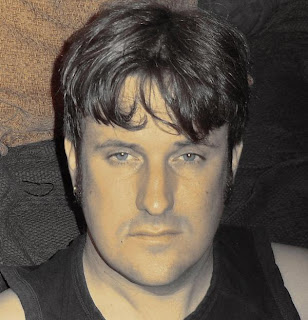 Scott Causer escaped from Rhyl and his ‘Hot Scott’ moniker over two decades ago. From playing in dodgy punk bands on the coast, he set up Northern Star Records and began releasing some incredible modern psychedelic music. A great introduction would be the absolutely superb ‘Psychedelica’ compilation albums (five volumes), featuring some of the best bands of that genre. Scott also repaid his crimes against music in Perfect Blue, Electric Mainline and more recently with two albums by The Cult Of Free Love (who you’ll also find on the ‘Keeping It Rhyl’ compilation album on link2wales records).

Best known for: Being relentless

Where I’d like to be right now: No 1 on Top of the Pops

My music collection has a lot of… Rockers, ravers, lovers and gazers

Don’t judge me for… being so beautiful… or for my last gig in Rhyl (at the Mermaid sometime in the deepest, darkest 90s) and the ensuing chaos it caused.

Five albums that keep me alive and why:
Primal Scream’s ‘Screamadelica’ for always being there and for breaking down the barriers of what a pop band could and should be.
The Jesus and Mary Chain’s ‘Psychocandy’ for making a teenage me realise that the route to making music might just be within my grasp.
Love’s ‘Forever Change’, a timeless and unsettling masterpiece incorporating eclectic styles and set in LA the Summer of ‘67. A reminder that however good a musician you think you are, you will never be as good as this.
Rolling Stones – Rolled Gold. From ‘67 to ‘71 the Stones were the greatest band that ever existed on this planet. Any band starting out needs to seek out a copy of this.
Lee Hazelwood & Nancy Sinatra – Lyrical vignettes that would horrify millennials and the ‘cancel culture’ obsessed interweb police. Lee showing the kids how to be brilliant and dangerous at the same time, despite being well in his 40s. A lesson for us all. Magnificent.