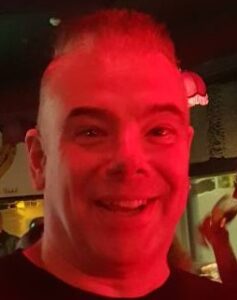 Phil Newall runs Louder Than War Records and has also looked after several bands over the years, including The Membranes, Goldblade and Trip. An avid gig goer and huge supporter of underground music… Here’s the five that keep him alive…

Best known for: I guess that depends upon who you ask! But if you have played a stage at the Rebellion Festival, I may well have taken your picture.

Where I’d like to be right now: Here will do just fine, but that’ll change, possibly by the time I type this answer! Touring Europe with The Membranes once again would be good, attending a gig, searching out vinyl in Berlin etc.

My music collection has a lot of: Cramps releases, lots, and lots of them – nearly all the official ones (if anyone has a decent copy of Human Fly with the glow in the dark sleeve or Surfin’ Bird with the Purple & Black sleeve), in fact multiples of them, and then an ever-growing mass of bootlegs & rarities. I’ve got everything The Membranes have ever released, I’m missing a few foreign pressings, a compilation, and some test pressings, but just about everything else I seem to have acquired; and then there is everything else which ranges from Marilyn Monroe to Merzbow via punk, post-punk, dub, doom metal, industrial/EBM, rockabilly etc.

Don’t judge me for: Confining the answer to music; a collection of mid 80’s Hi-NRG, mainly stuff written by Bobby O inc The Flirts who sounded like an all-girl disco version of The Ramones to begin with, Man Two Man etc and some Italo Disco! And possibly my biggest ‘crime’ – being partially responsible for releasing the first couple of Evil Blizzard albums!

Five albums that keep me alive and why:
I was certain you had asked me to compile a Top 10 previously – I checked and yes, back in 2020, so this may have some overlap.
My selection is all older releases, there are lots of great releases, even within the last month, but they haven’t had the time to fall into the question definition just yet.
Sex Pistols ‘Never Mind The Bollocks’ – As incendiary sounding now as it was the day it was released all those years ago, and yes this one was in my Top 10 selection; can’t see it ever dropping out of that.

Joy Division ‘Closer’ – ‘Unknown Pleasures’ generally gets all the plaudits (and was in my Top 10), but Closer was, I believe Joy Division’s finest moment, there is such depth in the song-writing, the lyrics are brutally honest (yet nobody noticed at the time) – an absolute essential and classic recording.

Devo ‘Q. Are We Not Men? A. We Are Devo!’ – An album that somehow combined the punk/new wave attitude with the electronics of NEU! And presented the entire thing as a concept, which when this came out was tantamount to a war crime!

Siouxsie & The Banshees ‘The Scream’ – a supremely rich album of contrasting textures, the abrasion that people thought punk was all about, combined with inventiveness, those McKay riffs, and a rhythm section that was drip-fed on the Velvet Underground and prime time Roxy Music, add to this Siouxsie’s distinct voice delivering those lyrics.

Suicide ‘Suicide’ – An album that alienated so many! An album that not just set itself apart from punk but signposted where punk would go; I reckon there is a serious argument that without this album post-punk, synthesizer music, and to an extent industrial music would not have evolved as it has.

But I also wanted to throw in The Slits ‘Cut’, Killing Joke’s debut, some Lydia Lunch, and obviously the entire output of Spam Javelin, but Crud’s humility prevented the latter!