5ALIVE – Alan Holmes – The Five Albums That Keep Me Alive 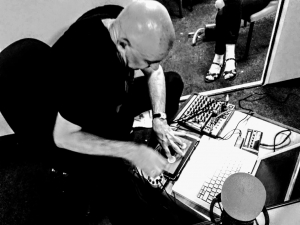 Where do you start explaining who Alan Holmes is? Musician, producer, artist, label chief, irritant, collaborator. First rising to prominence via John Peel sessions and persistent gigging with Fflaps and then Ectogram, Alan has also run the gauntlet with an almost endless list of bands. When not gigging, or producing singles for Gorkys Zygotic Mynci, he was a constant behind the counter at Cob Records store in Bangor. He also runs his own label Turquoise Coal.

Best known for: A persistent avoidance of popularity bordering on spiritual purity.

Current location: Locked down in my shed

Where I’d like to be right now: Locked down in my shed

My music collection has a lot of: Records (NOT “vinyls”!), the presence of beauty and noise (often simultaneously), the absence of U2, Paul Weller and Oasis, incoherent filing and shelves to hold up the records.

Don’t judge me for: My refusal to give up and try doing something I might be better at

Five albums that keep me alive and why:
The Monkees – Headquarters (1967)  – I discovered the joys of pop music in 1965 with The Dave Clark Five and The Beatles, but it wasn’t until I was six in 1966 that I was totally grabbed by The Monkees, who were on a whole different level. As a response I formed my first group with my friend Simon Smith, similarly pop-obsessed seven year old and now chief fire officer for North Wales. This is their third and best album from 1967 and the first that they played all their own instruments on. Without The Monkees, I would never have played music myself.

Faust – Faust (1971) – As a prog fan in the 70s, I loved the likes of Van der Graaf Generator, King Crimson and even Genesis – the groups who relied on ideas more than show-off virtuosity. However none of them prepared me for finding a mysterious clear vinyl record in a clear X-ray sleeve in our magical local head emporium Unit 21. Of course I had to buy it without having heard a note. When I did hear it, it totally blew me away with a music that sounded like nothing I had ever heard before. Even 40 years later it still sounds like nothing else, and astonishingly not only are the group now friends of mine, but I have even got to play with them! Had someone told my 14 year old self that, I would have died from shock (and hence not actually have got to know them).

Throbbing Gristle – Second Annual Report (1977) – Punk came along in 1976 with a promise to destroy rock, yet for all their claims, most of the groups were at their best a very welcome and exciting stripped down high energy reprise of the likes of The Stooges and MC5 from a decade previously, and at worse second rate pub rock chancers jumping on a bandwagon. The only group on the scene who came close to destroying rock was Throbbing Gristle – while punks’ philosophy was ‘all you need is three chords and a guitar’, TG’s was ‘who needs chords or guitars?’ Their first vinyl album ‘Second Annual Report’ was collaged together from live recordings from four of their 1976 gigs and studio recordings, and as with Faust, sounded like nothing that had come before. To really get TG though, you need ‘TG24’ – a 24 CD box set of all 24 gigs they played between 1976 and 1980 in their entirety.

Datblygu – Wyau (1988) – As a music obsessive growing up in Wales, I was always embarrassed that no great music had ever come from my country. There had been a couple of half decent hippy groups like Man and Budgie, but our one true genius John Cale had to move to New York to be recognised. Friends in school tried to introduce me to the Welsh language music scene, but the problem I had with these acts were that they were utterly and irredeemably devoid of any worth, which might be interesting conceptually for a moment, but not exactly what I was after. Many years later I chanced upon a home-made looking compilation of Welsh groups, however which featured Datblygu (and indeed other excellent Welsh groups). It was on the ultra DIY Anhrefn label and it changed everything. David R?Edwards from Datblygu sang about how shit the Welsh scene was… in Welsh. A couple of years later they made this masterpiece of a debut album, followed by several others, mostly as a duo with just David and perfect musical foil Pat Morgan, up until the recent “Cwm Gwagle”, sadly destined to be their last due to David’s tragic death. I had the privilege of blasting out Datblygu tunes at full volume in a church during his funeral – I like to think he would have loved the idea.

Lustmord &?Karin Park – Alter (2021) – Music is not something that lives in the past, and this immersive collaboration between Bethesda’s Prince of Darkness and Sweden’s ethereal electro-goth diva is only out this week, yet is as great as anything from the last 60 years. Music to drown in. I could easily have picked a few thousand others – in fact I did once list my top 2000 LPs in order, but gave up because I still had to miss too many out.