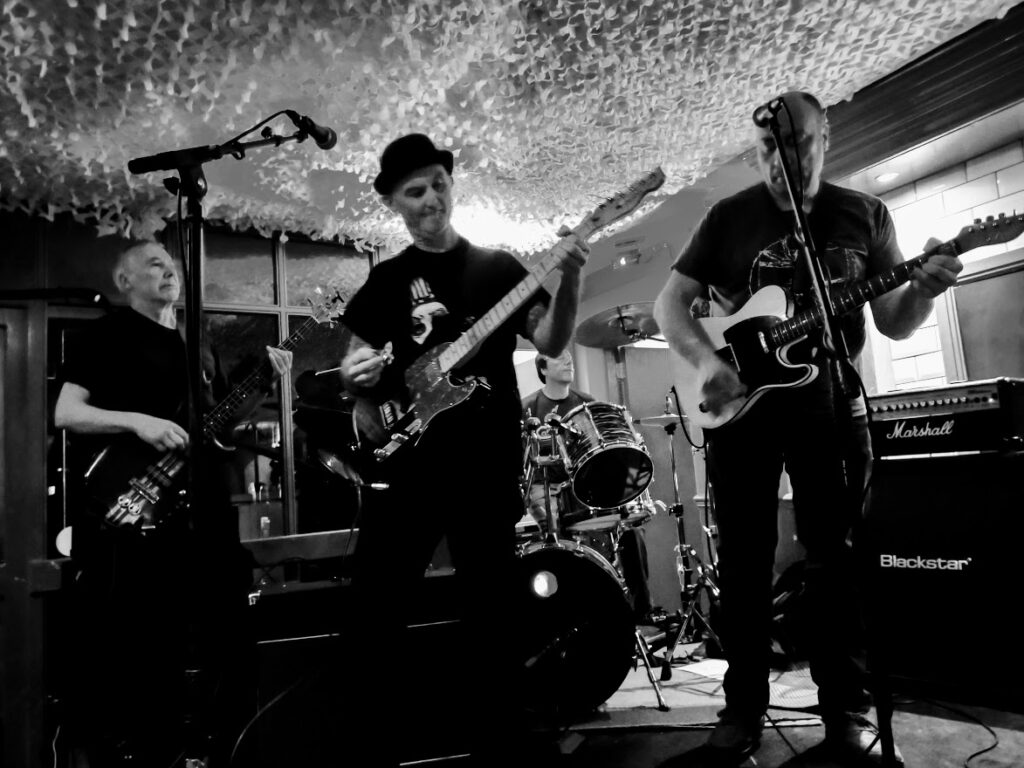 Bassists (good ones) are hard to come by, so once you’ve laid your bassist snare and caught one, you need to nail them down. Caernarfon post-punk-rock band White Ether laid their trap over a year ago, and such was their plight, it took that long for Mickey (of Scapegoats) to unwittingly walk into it and find himself on stage.

Attendances at gigs (by both punters and bands) during these times cannot be predicted or gauged… Particularly grassroots gigs… Bands get the Covid call and pull out last minute, someone is isolating, someone else is doing their hair… This is what bands (and gig goers) are up against. They’re also up against saturation as venues try to claw back the lack of income over the last 18 months (particularly in Wales).  The Manics sold out Venue Cymru during the week, as did Aussie Pink Floyd, as did Charlatans in Buckley. There is also a gig a week at The Pavilion here in Colwyn Bay and sporadic gigs in Rhyl down the road. So tonight the bands got to play to the other bands and a few other punters… Well, that’s not entirely true, as after each band played they fucked off home… Not, exactly being true to ‘the scene’ is it? This meant that as the next band played the ‘crowd’ had halved!

We’ve all been there, played to four people and a dog (I saw a similar scenario watching Theatre Of Hate play in Wrexham, so it does happen to the name acts too). What you missed was a well drilled set from White Ether who are evolving from the legacy of DFA and former guitarist Keith Morris to carve their own identity. That’s identifiable by the trademark wah-guitar, soft vocal and thundering drums. New songs like Jesus Freaks, Fall and the sublime Time For You taking precedence in a cool set. White Ether play The Front Room in Rhyl on Wed 15th December. 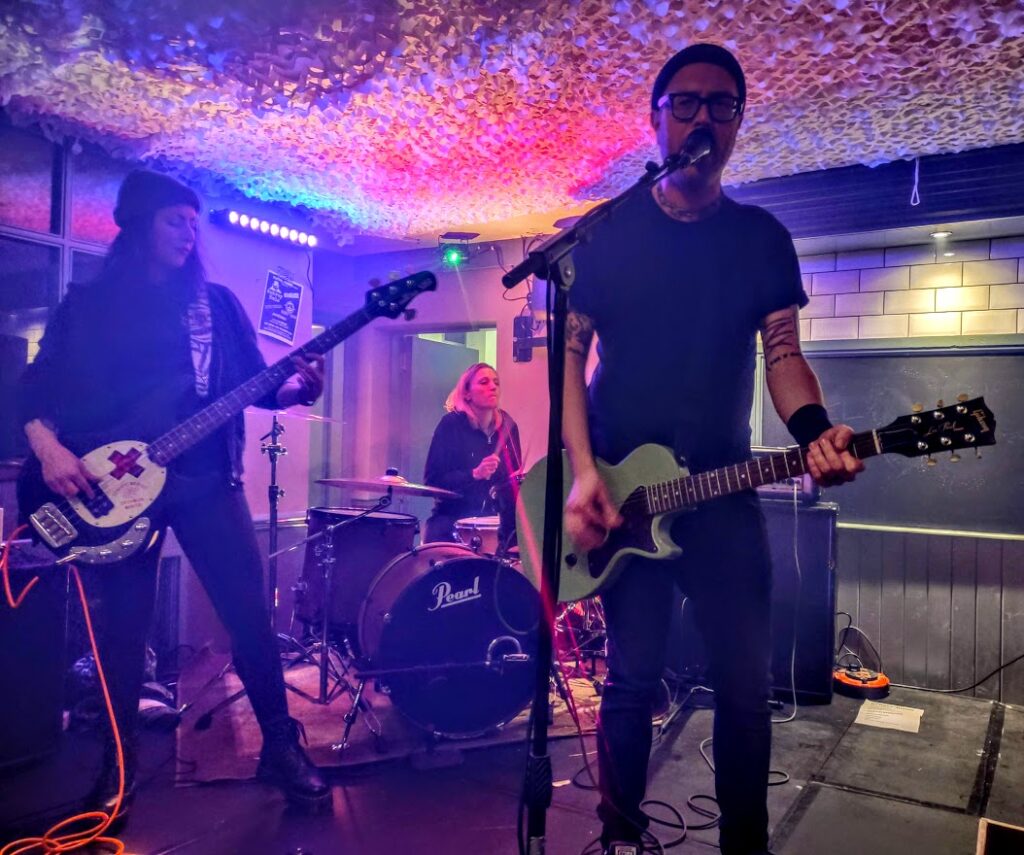 How Street Blood strayed so far from their North East home for a one-off gig is beyond me, they must be bonkers! A pretty new band made up of the outlaw Babsi, the outcast Wayne and the outsider Emma, they play it tight and flawlessly in the Rancid mould. Wayne has plenty to say and his guitar guile betrays the fact this definitely isn’t his first band. We All Bleed The Same Colour is reference to the refugee situation and also the title of their forthcoming debut EP. Wayne was almost apologetic over the song content during the set as they covered the punk standard subject matter (like Media Control). No need to apologise when it’s done that well. 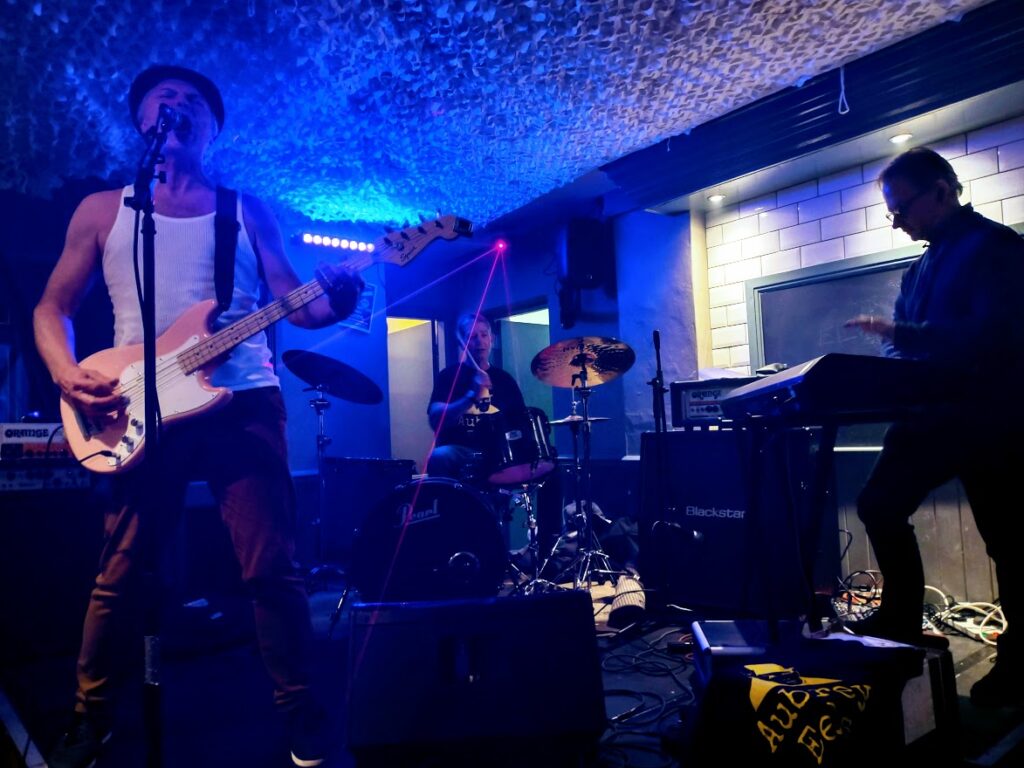 Opening without any pomp or ceremony were/was Aubrey Eels. Sounding something between Kunt & The Gang and Frank Sidebottom with heavy emphasis on keyboards it was evident this was no gimmick and that was as far as the comparison went. Aubrey has plenty to say and don’t let the Ricky Tomlinson white vest fool you, this guy is sharp as a needle. The organ was a surprise as Aubrey Eels’ third album, ‘Flaps’ has none, the organist looked like Elijah Wood’s character in ‘Sin City’ (that silent bespectacled murderer in the film).
‘Groovy baby! I fuckin’ hate flower power’ shouts Aubrey as they launch into the excellent opening track of that said LP… The social commentary finishes with Bank Of England and they promptly ran off… Great fun though and deserved at least an audience, as did all the bands.