What did God give us Neil?… God gave us life Nigel!… Sure Did. 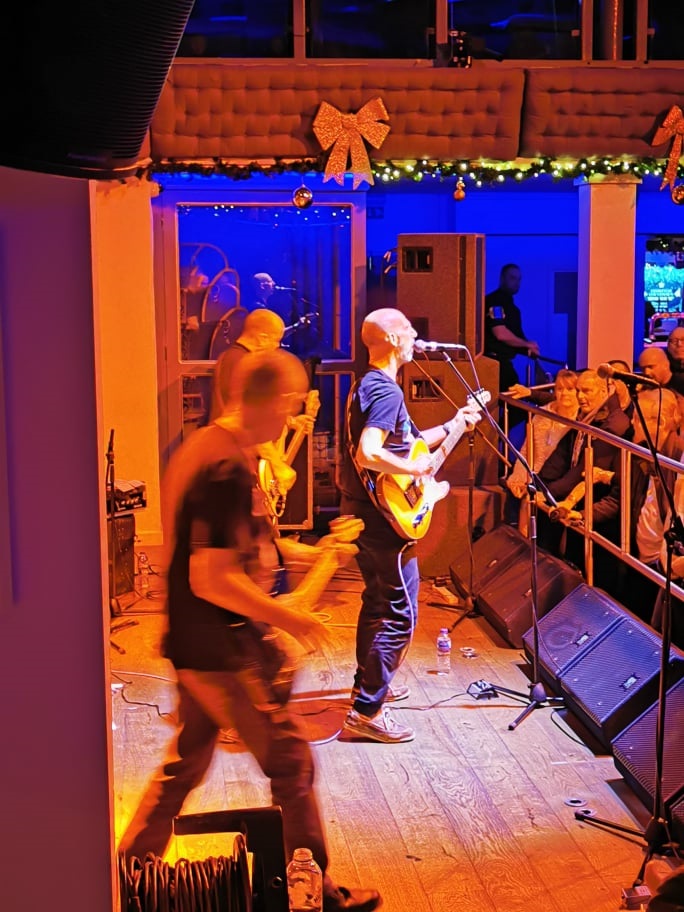 A visit to one of my old stomping grounds and a chance to catch up with a couple of old punk mates that I’d not seen much since defecting across the border over 20 years ago (don’t worry I got my tetanus jab before returning).
Well, Half Man Half Biscuit… An important band for me since their inception in the mid eighties, but surprisingly one I had never seen live until tonight. Maybe not that surprising really as gigs by this Birkenhead mob have  been sporadic at best.
The legend that was John Peel (who’s passing way back in 2004 still upsets me) and his Radio 1 show was my introduction to them, and consequently ‘Back In The DHSS’ was swiftly bought. I always loved the topical humour and the pure daftness of the lyrics. References to celebrities and places I knew always made songs personal to me and got me hooked. Nigel Blackwell has few peers when it comes to this sort of thing, with the ever lovable and observant Alex of Wonk Unit probably running him close in my humble opinion.
Considered more indie than outright punk but a band that crossed the divide (along with Carter USM) for me and a lot of my mates, I Hate Nerys Hughes (From The Heart) is a punk classic though and there’s no argument about that!!
I heavily played the music they created for a few years and second LP ‘Back Again In The DHSS’ was also purchased on release. Dickie Davies Eyes from said album is a firm favourite.
I confess to not really following them into the 90’s and beyond (guess I was much more into my dbeat/crust/hardcore/death metal/thrash/crossover stuff by this time, plus children and life in general took over). Was a long time after they came out that I heard the brilliant ‘Trouble Over Bridgewater’ and ‘Achtung Bono’ albums. Needless to say my love was rekindled and I’m still working my way through the back catalogue.
Anyway enough of my ramblings… on with show…..
A short walk from the Proud Salopian pub (great selection of ales), under the railway bridge and uphill to the Shrewsbury Buttermarket. This venue has changed a lot since my last visit and looked great being decked out ready for the Festive period. It’s absolutely packed out early on and a warm friendly atmosphere greeted us. A very different crowd to what I’m used to with the majority unbelievably being older than me! Not a mohican, offensive t-shirt or  tattoo in sight, just an excited and expectant buzz followed by a huge cheer as the band stroll on stage. Guitarist Karl Benson looking resplendent in his Crapsons top. 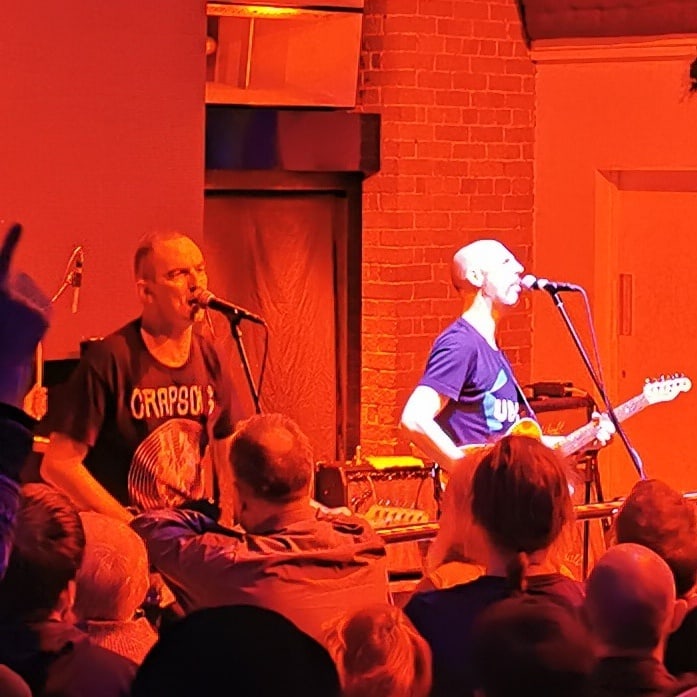 They are straight into it and the sound is superb. A mix of old classics and newish anthems are all blasted out and between each one we are entertained by Nigel’s off topic observations and general humorous verbal volleying with the crowd. At one point asking if there’s anybody in from Kilmarnock (?) and wondering what the Buttermarket used to be back in the day (?!). Some good stuff back from the punters too… When asked if there was any requests someone shouted “play one the drummer knows” which made me chuckle.
Early highlights for myself were 99% Of Gargoyles Look Like Bob Todd and Fuckin’ ell It’s Fred Titmus from aforementioned first LP. Every word loudly chanted along to by most of the enthusiastic front few rows (and myself).
Something quite rare about a band that makes you smile and dance like an idiot at the same time. Wonk Unit, Pizzatramp, 2 Sick Monkeys and Pete Bentham And The Dinner Ladies being notable exceptions. HMHB are right up among these on achieving this.
Halfway through we are treated to a superb rendition of National Shite Day from the ‘CSI Ambleside’ album. The songs come thick and fast and I forget to note which ones are played but obviously remember Joy Division Oven Gloves being very popular towards the end of the set (complete with several punters waving said kitchen safety essentials).
Something else I’m not used to with the vast majority of gigs I attend is an encore!!! It’s usually 4 bands, 30 minutes and home. Really glad they did though as we all got to have a shout to the rousing No-One Cares About Your Creative Hub So Get Your Fuckin’ Hedge Cut!
Even better was to follow though as they then gave us a perfect rendition of Magazine’s classic Shot By Both Sides. Two hours of top quality musicianship and happiness was had by all.
Very cheap records were bought from the merch table by me as the throng of smiley faces filtered out. A fantastic time was indeed had by all.
The fairly recent death of Lionel Blair got me thinking about how many of the people name checked by HMHB over the decades are actually still alive! (answers on a post-punk postcard please). I know Len Ganley, Rod Hull and at least one of Little and Large have departed this mortal coil.
This only just goes to show the longevity of the mighty HMHB that they are still here and producing fantastic music and boss live shows. Long may it continue…….
P. S.. Done a little research and apparently Lech Walesa is 78 and very much alive and well!!!!
GIG REVIEW – Cabbage, The DSM IV, Crapsons @ Jimmy’s, Liverpool 13th December