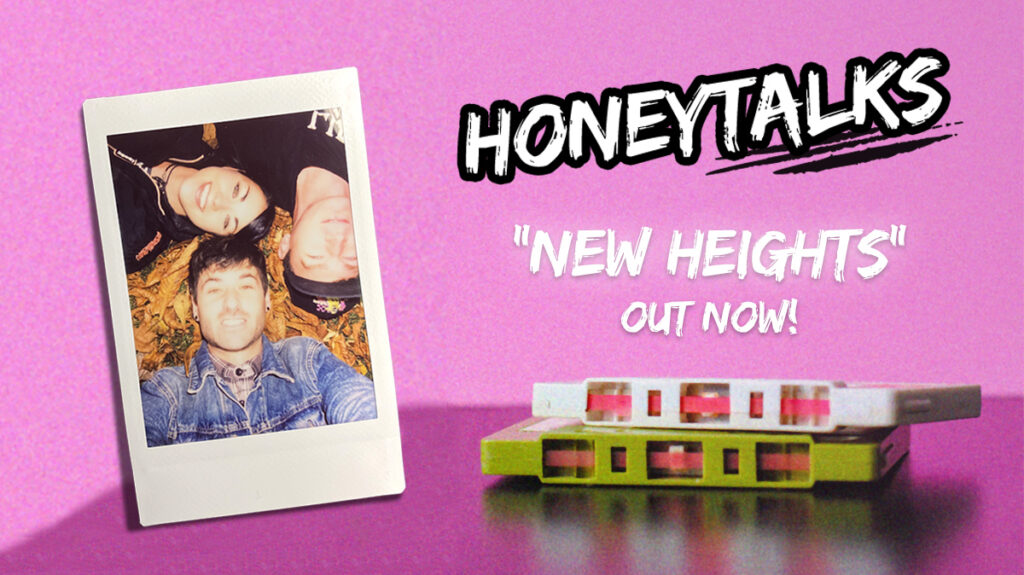 Two words that seem to generate an immediate negative reaction from the music intelligentsia, seemingly because they view the genre as lightweight, naive and just for kids.
I’m sorry, but I prefer enthusiastic naivety to seen-it-all cynicism, I believe rock n roll should always be the preserve first and foremost of kids and I’ll always choose music that is lean and light over anything that is flabby and flaccid.

Bands like Slackrr and Sheepy have been keeping the pop punk flame burning brightly in the UK and they are now being joined on the circuit by a new North Wales-based trio.
They’re called Honeytalks and to say that they’ve hit the ground running is something of an understatement, given that they’ve already got a string of ecstatically-received gigs under their belts and a rapidly filling gig diary for 2022 that includes festival appearances alongside their more regular club dates.

They’ve now released a first single called New Heights and like all the best pop punk songs it’s an earworm that boasts an unforgettable hookline, shoutalong chorus and that indefinable quality that makes you want to rip up the carpet, bounce off the walls and generally annoy the neighbours (well, you are in their living room!!!).

Adam Robinson (guitar/vocals) and Dave Griffiths (bass/vocals) make a gloriously melodic racket, but the undoubted star of the show is drummer Lauren James (think Travis Barker with an infinitely better haircut) who gives the song its velocity and propulsion.

Ok, New Heights sticks pretty closely to the standard pop punk template, but it would be pretty stupid of the band to release anything too leftfield as a debut single.
Having seen them live on a number of occasions already, I can vouch for the fact that they have plenty more songs in the can and that they are an absolute joy in a live setting.

Further down the line I’d love to see them stray slightly away from regulation territory from time to time just so that things don’t become too predictable – to illustrate my point I’ll say that I Miss You is still my favourite Blink 182 song simply because it broke the mould for that band.

Honeytalks will no doubt be playing a venue near you once restrictions are lifted and I strongly urge you to catch them if you can.

In the meantime, set the dial to 11, blast New Heights through the speakers and I guarantee you’ll be singing the lines “I’m drowning in daytime TV, it’s what works for me when I’m not sleeping” whether you want to or not – resistance is futile!!!!