EP REVIEW – Those Fucking Snowflakes ?– Everything Is Absolutely Fkkkkd 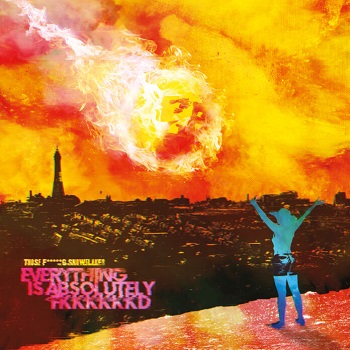 Uncooperative Crusties (which is nearly all crusties) is pretty damn good… It sets the tone, musically (and politically) for this brand new 10″ EP, coming out on Louder Than War Records on January 22nd. And if I’m right, didn’t some prick in Westminster call climate change protesters uncooperative crusties?

Due Some Terrible End – sounds like Maines (check them out!) and Fugazi (fuck them ha ha!) – with its post-hardcore mid-2000s feel; a genre I do miss, and when it was done good it was brilliant – this track is brilliant.

White Isn’t Right – is hardcore, kind of tripping over itself hardcore, kind of like the calamitous sound of early Membranes clashing with some tasty American hardcore. A bit like my own band where people form an opinion of you from the name alone, I was guilty of Those Fucking Snowflakes. I had them down as a one-off fad thing formed solely to make a silly (and obvious) statement, or a fast buck before fucking off back to their day jobs… This is definitely a statement… A statement of intent and as un-faddy as you can possibly be.

By The Power of Barnard Castle – pays homage to our secret leader Herr Cummings, who now rules incognito from his own castle in County Durham, and again dutifully nods to the pageant of post-hardcore.

Cuadrilla Can Fuck Right Off – I had to Google Cuadrilla to find out who exactly Those Fucking Snowflakes wanted to fuck right off… I was so disappointed to find out it wasn’t a person and just a boring energy company who are going to create a fracking great earthquake in Lancashire.

Mendacious Meddling Milkshake Recipient – again, I turned to the online dictionary to find out what Mendacious means; these guys are way too intelligent to come from Blackpool (ha!). This one smashes along at full pelt to round off a fine collection of songs. And what’s more, it’ll look fine as an addition to your vinyl collection, and if you’re ever feeling angry about the utter wankers who run this country, then stick this on and start a revolution.