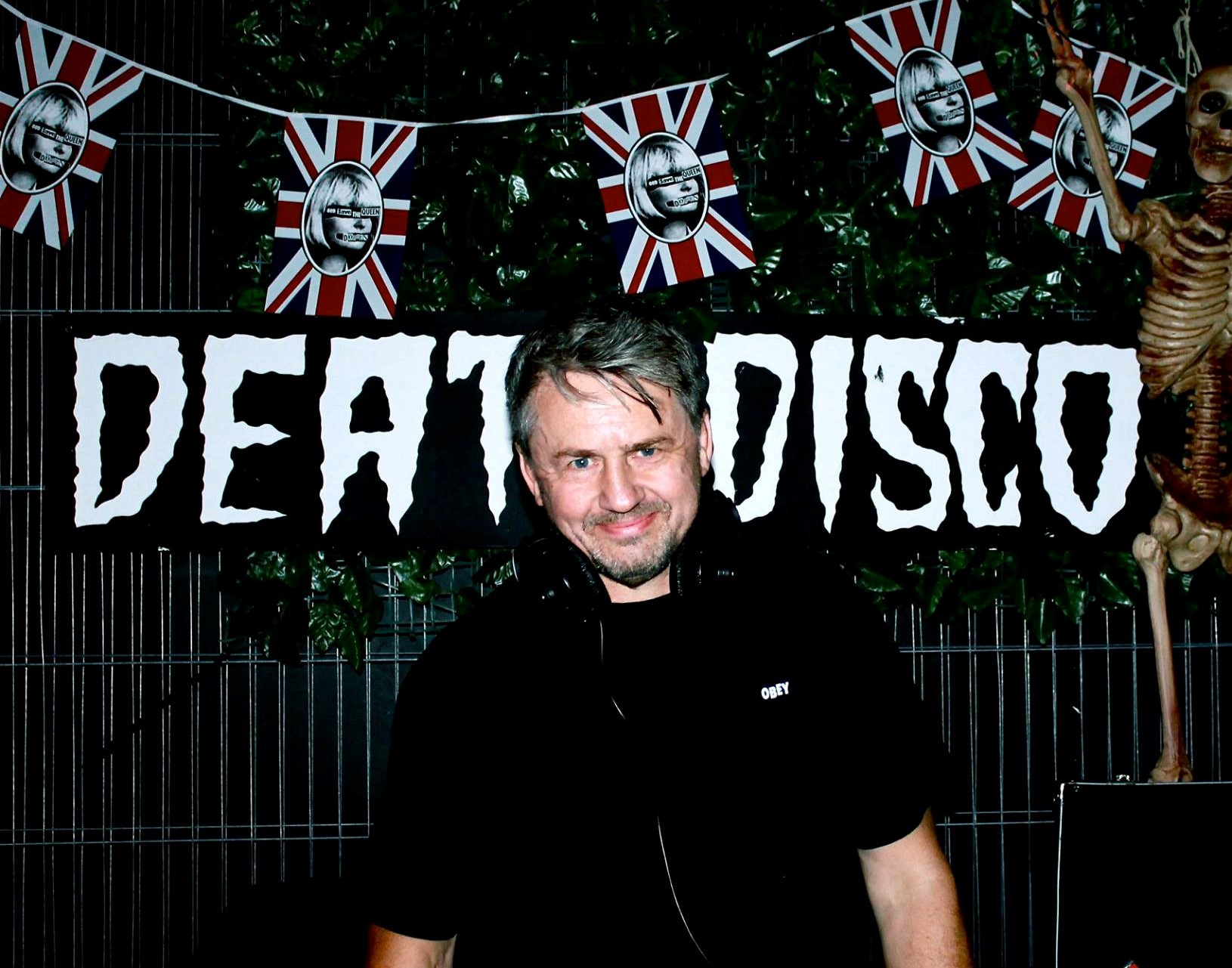 The Tivoli in Buckley is steeped in history, and link2wales recently published a list of the huge number of gigs the venue boasts. Former promoter Marc Jones saw this and put his hand up to share his remarkable story.

It transpires Marc previously managed Scorpio Rising and also promoted gigs at iconic Liverpool punk venue Planet X and inadvertently put my old band, 4Q on there twice! Small world… but that is merely a footnote in a fascinating story…
Read on….

1979 was the starting point for me! I was a bit too young for punk but loved the Sex Pistols, The Clash and Ramones and the first singles I bought were Tommy Gun by The Clash and Denis by Blondie. First album bought was probably ‘Never Mind The Bollocks’ or ‘It’s Alive’ by The Ramones.
I was 15 in ’79 and post-punk was starting to happen. Every night I’d religiously listen to John Peel to hear the likes of Joy Division, Human League, Echo & The Bunnymen, The Fall and Cabaret Voltaire. It was in so many ways harder, more experimental, and this darker music just hit home. 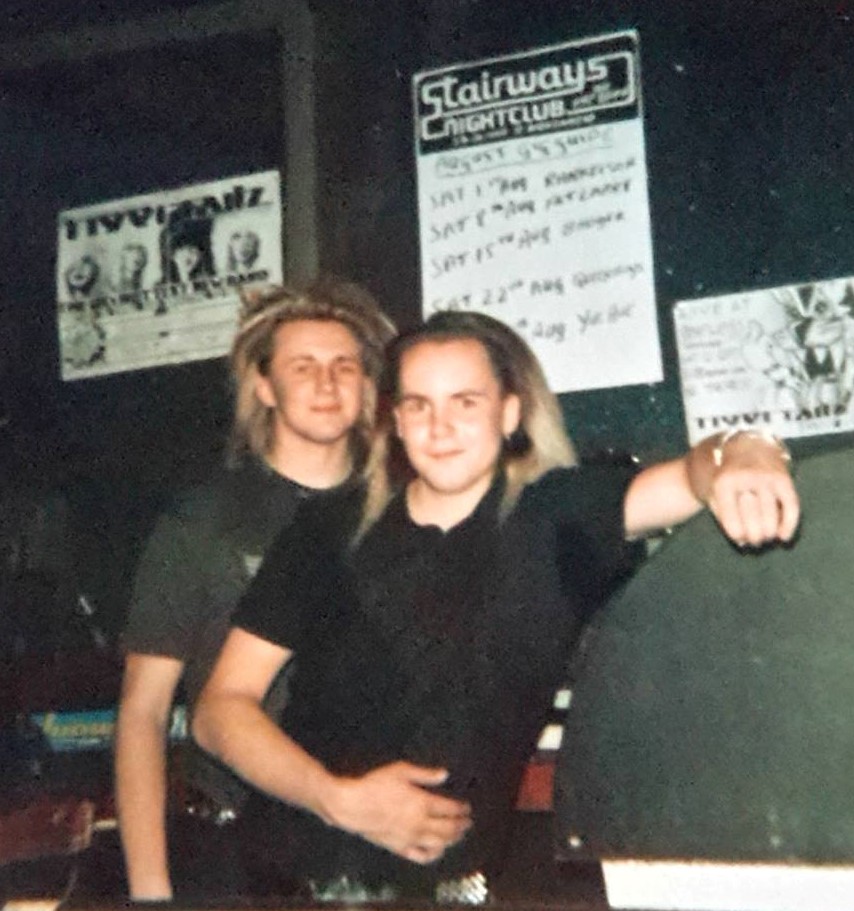 Although I was in bands, I’m no natural musician. My Mum and Dad were art teachers and that’s where my talent lay and so I found it easier to make and design fanzines rather than make music. 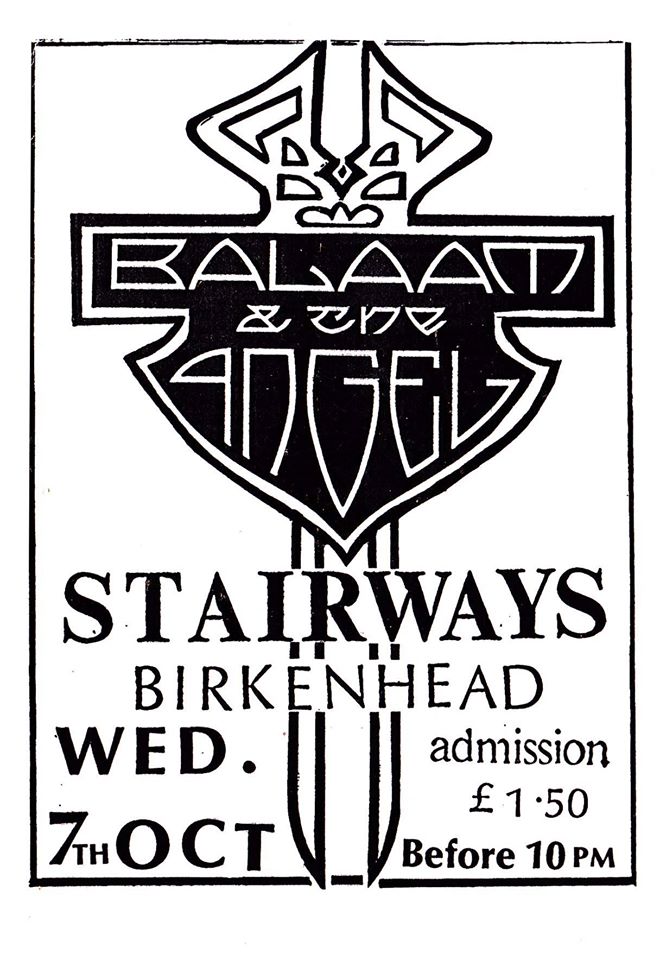 My first gig was The Specials but I didn’t start going to gigs regularly until 1982, especially when at University. After Uni, the club Stairways in Birkenhead had an alternative night on a Thursday and one night I just said to John Weaver, the promoter (and of Skeleton Records) I think I can do a better job than the regular DJ. I also suggested that if he gave me a chance and by working together, we could do something really different for Birkenhead; and so it proved. We put some great bands on including The Godfathers, Icicle Works, Shamen, Half Man Half Biscuit and The Proclaimers.

One of the bands we brought to Stairways was Faith No More (with Chuck Mosely) at the time of ‘We Care A Lot’ and that brought me to the attention of Dolphin who owned Stairways. and also his future business partner Howard Croft. Howard owned The Tivoli but more about that later. 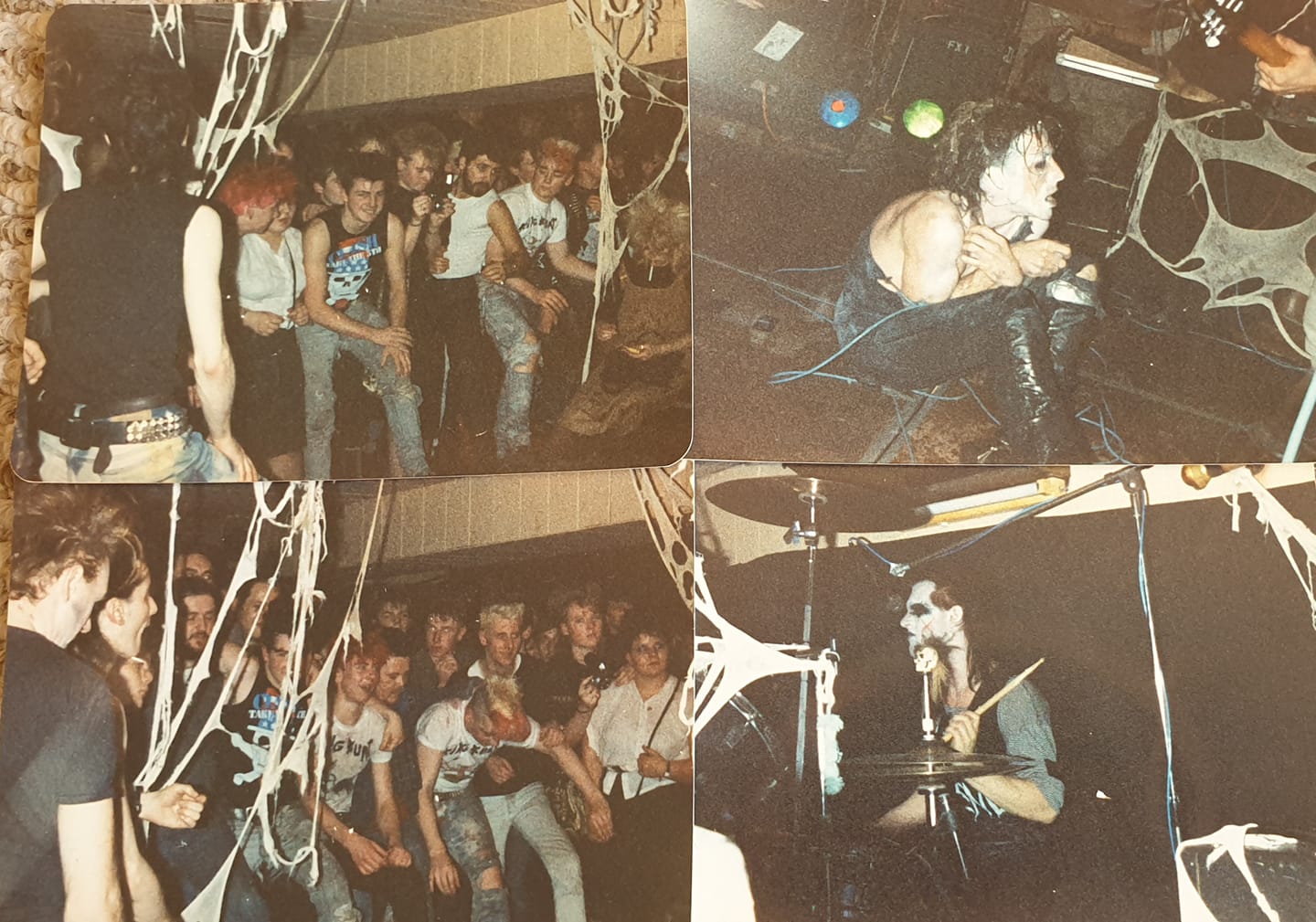 So from Stairways, I started at Planet X in 1986 as resident Saturday night DJ and promoter. Doreen Allen and Kenny Dawick were the owners and over the years we became great friends and there I put on a load of goth and hardcore punk bands.
I shared Saturdays with Pek and Pete C from Under Siege who brought to Liverpool the most amazing British and US punk bands. I also did my bit and put on Carcass about 15 times, Bad Brains, Dr & The Crippens, Doom and Welsh nutters Bomb Disneyland. Although the big one I missed was Nirvana who were offered to me for £500 in ’88 or ’89… They wanted to do the Poly (John Moores Uni) not the Planet, but it was about £200 more than I could afford, although I now wish I’d gone bust on that one. 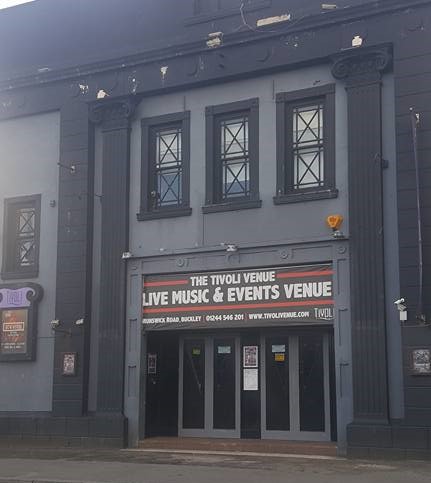 I can’t quite remember the order of things but I think Howard and Dolphin bought Sloanes in Birkenhead and turned it into The Krazyhouse. Then a little later, Howard bought the Tivoli as well. As Planet X was coming to an end I moved to the Krazyhouse as Thursday and Friday resident alternative DJ and Wednesdays at the Tivoli.
Howard loved bands but rock was his thing so he needed somebody to look after the alternative end of things, and that’s where I came in and started booking stuff immediately.

For the Tivoli and Krazyhouse it became obvious to both Howard and I that if we could offer a band on tour two gigs. It would give us a certain amount of booking power with the agents and so that’s how it worked out brilliantly. The first band I put on Tivoli Wednedays was Mock Turtles on 3rd October 1990. This concept of indie alternative disco punctuated by a couple of bands proved to be a real hit with people. As well as locals from Buckley, people came from all over Deeside, Flint, Chester, Birkenhead and even from Liverpool for the gigs.

A promoter has to have good ears, he has to catch the flavour of the month, tune into what the audience are into but be brave enough to stick his neck out and say, ‘I know these are a good band and catch them now at the Tiv before they are massive in 6 months time’.
It was a very exciting time in music in the years leading up to Brit Pop but all those bands were up and coming between ’91 and ’94. Most didn’t make it big but they certainly enjoyed their 15 minutes of fame; however some like Radiohead, Manics, Spiritualised and Oasis went on to become huge bands.

I was very hands-on with the bands, I loved to chat to them and check they were OK. Most bands are lovely, their Tour Managers could be difficult but we did look after the bands… Every Wednesday my Mum would make a spread of dressing room food for them which everyone appreciated. The sound was done by a very fledgling AD LID Audio who are now a multi million pound company. but at the time were just the best sound company in this neck of the woods. Concurrently, I was also presenting a show on BBC Radio Merseyside – like what Adam Walton does now and Dave Monks on Introducing. So many of the bands I interviewed on the show either played the Tiv that night or, if they were promoting an album and tour they’d probably end up playing the Tiv a couple of weeks later. So my face got known with the bands which made things easier. 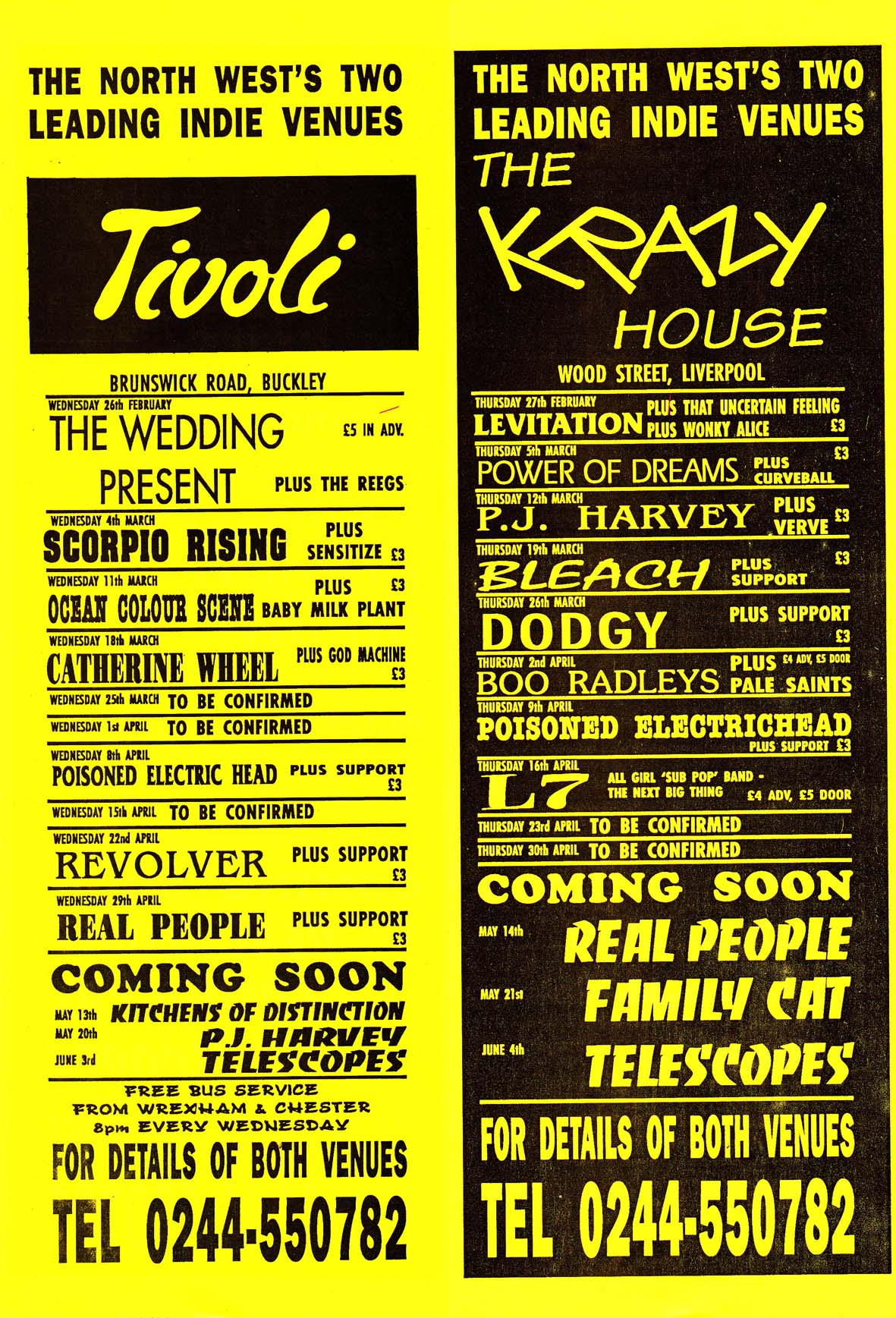 Many of these bands became acquaintances and on first name terms. Richey Edwards and Nicky Wire [on Manic Street Preachers] were lovely and great for quotes. Radiohead were just really decent people; funny, polite and grateful for a gig, but you could tell they were driven. Of the bands, Radiohead you knew were destined for fame. They were just premier league in terms of their sound and professionalism.
As for Oasis; Noel Gallagher did all the interviews, and so I interviewed him 2 or 3 times and he’s just so witty, razor sharp but really normal. Liam was just Liam, he was just totally loving the crack and adoration, so he’d say ‘alright’ when you went into the dressing room. However, to Noel’s credit … a couple of years after the gig at the Tiv and Oasis were the biggest band in Britain bar none, I was at a festival and Noel must have had about 50 people milling around him but he came over to me and said ‘How you doing Marc?’. I’ll never forget that … the mark of a man and I always respected him for that. 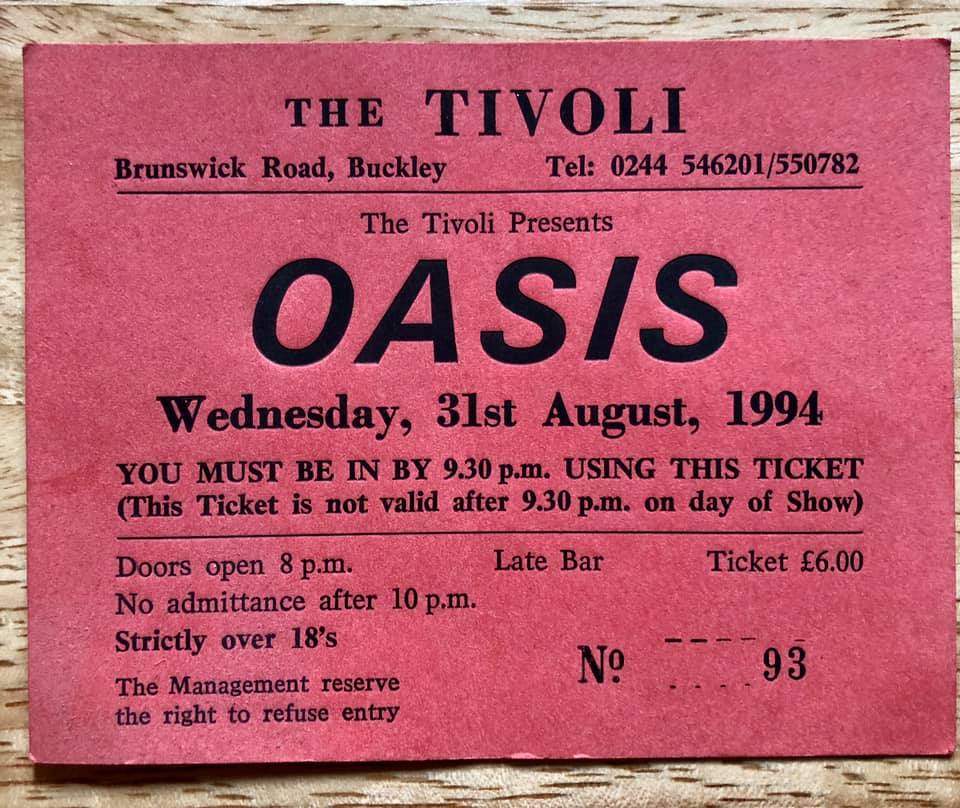 In some ways the Oasis gig was the peak of the Tiv, I fell out with Howard soon after that. We were both very strong personalities and for three years at the Tiv we created magic. No one would have given Buckle;, a one horse town in North Wales, a hope of succeeding but we had put it on the gigging map of Britain and bands always enjoyed playing there.
Some achievement, of which I’m very proud of. Sadly Howard passed away in 2018 but we had long solved our differences and we had become friends again. I think the Tiv’s enduring legacy is that people still talk about it even to this day. For me, it was a very special and amazing time in my life. It taught me so much about the music business, about driving hard bargains with agents but never ripping anyone off.
The best thing is a lot of those people who were in the local bands like Baby Milk Plant, Fourth Egg, Daisy Chain and Goodnight Said Florence are still my friends 25 years later. Remarkable place, brilliant bands, amazing atmosphere and just the best audience ever.

[The Tivoli, continues as venue to this day, run by Rokib Miah – hosting many bands]

Gareth Jones (Gaz Top) presented an hour long show about The Tivoli as part of a documentary on BBC Radio Wales called Rockin’ The Gogs (broadcast 10.09.2016) alongside (among others, Neil Crud) 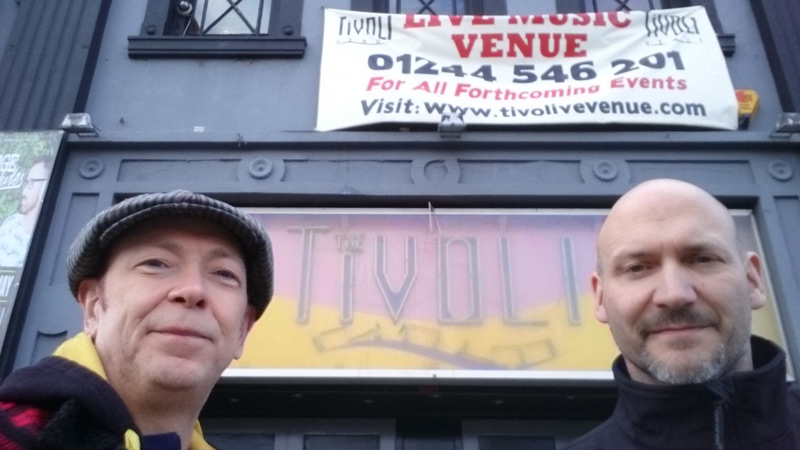