Whatever happened to protest music? I guess it’s still out there in hip-hop, punk and metal…but songs that directly address current issues don’t seem to make the charts. Selfishly I kind of like that MY favourite genres are the ones with something to say, but I’d also like to see chart music that energises the younger generation.
So maybe this one’s for the kids. Cue a Star Wars style screen crawl…….

A long time ago (1980) in a country far, far away (New Zealand) a band called The Knobz recorded a song called Culture?’……

The Knobz had barely been together a year and they had a song that went top 5 on the charts. The band could best be described as a local version of The Knack. Black suits, white shirts, skinny ties and catchy guitar pop, you get the drift.

Culture? is a good song, not a great song. What makes it important is what it’s about and how it came to be released.

If you read my last column (There Is No Depression New Zealand – Blam Blam Blam) you’ll remember a passing mention of a 40% sales tax on recorded music in NZ during the late 70’s and early 80’s. Robert Muldoon, the Prime Minister at the time had made comments about popular music saying it wasn’t culture and this inflamed artists and the industry alike.

Plenty of lobbying went on to try and convince the Prime Minister that a reduction in sales tax could energise local music, sell more albums and maybe even see Kiwi bands make a splash farther afield than Australia. Sadly, none of this worked and the tax remained, so The Knobz did the only thing they could, they wrote a protest song.

The song poked fun at the Prime Minister for his lack of action and easy job while commenting that if the roles were reversed he couldn’t front a band.

‘Don’t give me culture, I’m not hearing you Rob. I can buzz around like a Beehive boy, but I’d like to see you do my job….. Up front with The Knobz’ 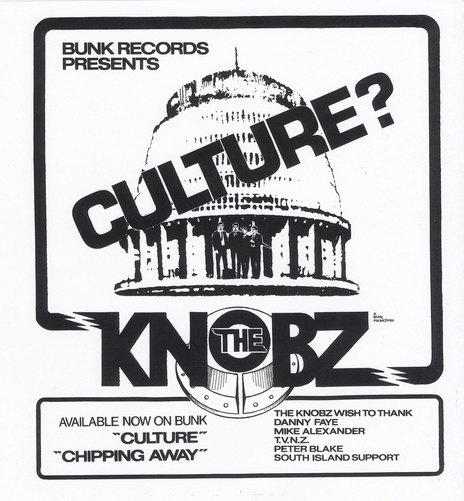 Although the song seems pretty tame now, at the time it became a bit of a political hot potato with EMI refusing to distribute it, so the band took the indie route and went with Wellington based Bunk Records to get the single out.

The song went top 5 and became the first self funded single to reach those lofty heights in the local charts. In 1980 this song was everywhere, radio, TV, and in live venues up and down NZ. The band left for Australia after releasing a full length album ‘Sudden Exposure’. At the time the Australian live scene was arguably one of the best in the world and was a tough prospect for a little band from New Zealand. Within a year The Knobz had disbanded and joined other Aussie acts.

Earlier I said that maybe the story of Culture? was for the kids in the hope that future generations might shake off some of the apathy that old punks (like us) see when we look around. But we are living through a global pandemic that has seen the arts, music and cultural sectors left to rot by the government. The parallels between 1980 in New Zealand and 2020 in the UK are uncanny. So maybe this story isn’t for the kids, it’s for all of us. Support local bands, venues, promoters and everyone associated with this industry we love. Don’t wait for support from above, it may not come. Be like The Knobz.