Drinking songs, I’m sure we all know one or two. Yeah, it’s fun getting pissed and belting out a bit of The Macc Lads, but what if there was a drinking song that was actually good?
Look no further, in New Zealand we have one…. it’s called ‘Bliss’ and it’s by Th’ Dudes.
Th’ Dudes (their name cobbled together from the NME cartoon ‘Th’ Lone Groover) came together as a band while students at Sacred Heart College, an Auckland Catholic Boys High School. Incidentally, Tim and Neil Finn (Split Enz) also went to the same school…must have been something in the water in the 70’s!

Things moved pretty quickly for this bunch of teenagers. Kicking off in 1976 playing covers, these gave way to more and more self penned tunes and live shows that got the band noticed. Auckland in the late 70’s had a super competitive live scene and as the best bands went off to Australia, the UK or USA, new young bands filled their shoes.

A high profile ‘Battle of the Bands’ win and a solid 18 months of live shows led to interest from booking agents. Enter Charley Gray. Gray’s Airedale Artists had been the breeding ground for some of NZ’s biggest bands and he had a plan for Th’ Dudes. They were clearly told ‘If you want to be treated like stars, you have to behave like stars’. The band took this advice and ran with it!

1978-1980 was a whirlwind of live shows, booze, dope, speed and groupies. Gray held up his end of the bargain. He demanded the best treatment for the band, hired a full-time road crew (unheard of in little ol’ NZ at the time) made sure they had the newest gear and booked killer shows. 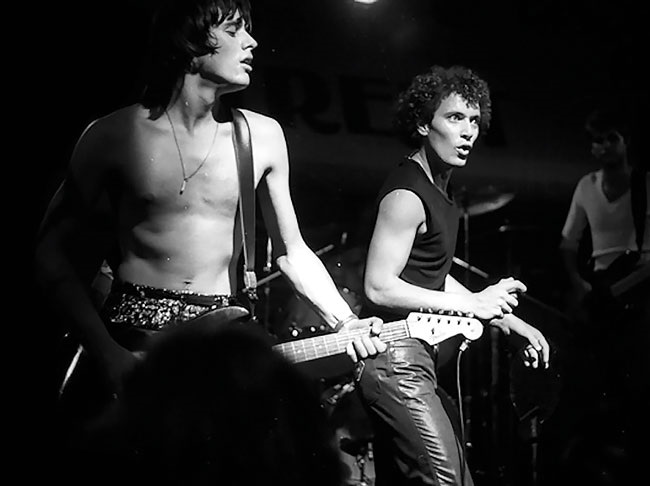 Through all this the band released a number of songs that would become Kiwi classics. ‘Bliss’ was one of these.

The original title of the song, ‘Piss’, is completely interchangeable, sing it how y’want. The song was written in reaction to the drunken audiences Th’ Dudes played to on tour in Australia, but quickly became an audience favourite and ultimate sing-a-long (or shout-a-long) on-the-piss anthem.

Sadly, the song came out around the time the band was running out of steam. Th’ Dudes [pic above by Murray Cammick] had taken the advice to act like stars too far. Whiskey by the crate, dope by the pound and a speed intake that would make Lemmy proud. All this combined with increasing band debt and shrinking audiences created a tense atmosphere. The band called it quits in 1980 having burned bright and fast like fireworks.

Bliss went to number 25 on the Kiwi charts in 1980 and was voted the 50th best song of the 20th Century by APRA (Australasian Performing Rights Association), not bad for a drinking song!

Go on, give it a try. Listen to it a couple of times then get a few tins in ya. Whack the song on and you’ll be belting it out in no time. It’s infectious. I’ve listened to this song hundreds of times since 1980 and it still makes me want to get ripped and sing it at the top of my lungs. Perfect.