The death of Eddie Van Halen this week had me reflecting on how his guitar playing influenced my own…..it didn’t.

Don’t get me wrong, I love Van Halen, I mean, REALLY love Van Halen. I even shed a tear when I realised that due to EVH passing away I was never going to see them play. They’re one of the few remaining ‘big’ bands from my youth that I’ve never seen live as they bypassed New Zealand (until 1998 when their first two shows with Gary Cherone were in Wellington and Auckland). 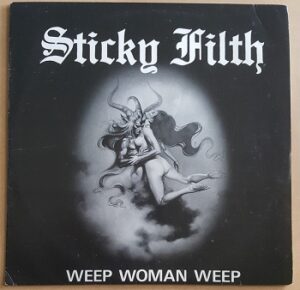 But as a guitarist I never saw EVH as an influence. Right from day one I knew I could never play like him. I simply don’t have the talent. When learning to play in the 80’s and joining my first bands I was firmly in the punk/alternative camp. I played in bands that were celebrated not for their technical ability but for their enthusiasm. Gigs were whichever house party would have us and setlists were peppered with butchered versions of The Cure, Velvet Underground as well as many NZ bands.

One cover song, ‘Weep Woman Weep’ by Sticky Filth, was always a favourite. Released in 1988 the song, and band, had everything I was looking for. Firstly their name, guaranteed to piss off my parents. Secondly the song, raw, simple, catchy and subversive. This, and songs like it were what influenced me and my formative years in bands.

Sticky Filth hail from New Plymouth in New Zealand, just like my Mum and her family. I spent plenty of time there growing up and I can see why Sticky Filth emerged playing the music they did… unless you were a dairy farmer there wasn’t much going on…..dullsville!

The band were (and still are!) a three piece. Guitar, bass, drums and shouting, pure punk. Formed in 1985 they’d self released a cassette in 1986 before hooking up with New Plymouth DIY label ‘Ima Hitt’ to release their debut album ‘Weep Woman Weep’.

Sticky Filth weren’t a chart band, their songs and albums were favourites of a select underground audience. They played anywhere and everywhere for gas money and some beers. The band were a stalwart of biker clubhouse shows and alternative venues. Sticky Filth walked it like they talked it, operating outside of the mainstream for 30+ years. 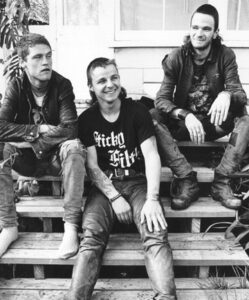 Weep Woman Weep still resonates with me now. Sticky Filth weren’t virtuosos, they had enough ability to write catchy songs and play them live.  Listening to it (and watching the video on Youtube) takes me back to my youth, and my own first shows. I loved Van Halen and their songs but I was never gonna be that good. If I could bash out ‘Weep Woman Weep’ to a crowd and get a cheer at the end that was good enough for me.

*Footnote – Sticky Filth re-released this song for its 25th anniversary and it went TOP 10 in the New Zealand charts!