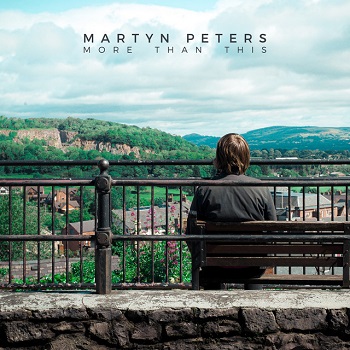 Someone once said that nice guys never win, but Martyn Peters will bury that particular platitude forever if there’s any justice in the world.
You’ll have to go a long way in this industry to meet a more approachable guy, so his growing reputation throughout the UK has been built on those good, old-fashioned qualities of talent and hard work rather than hype and bluster.

He left Denbigh, that lovely-but-scary market town of pubs, pints and pitchforks-at-dawn, to relocate in the outer reaches of that there London in order to be closer to the industry’s pulsebeat and, prior to COVID, was landing the prestige gigs and getting noticed sufficiently to augur well for his future career.
The pandemic has effected a return to North Wales for him for the time being and he’s spent the enforced downtime productively, leading to the release of a new single, More Than This, recorded at Orange Sound Studio in Penmaenmawr and self released across all major platforms.

In many ways it’s vintage Martyn Peters, pure and simple, so you will know what to expect if you’re familiar with his critically-acclaimed “Veins” album, but More Than This is an important release simply because it’s a song that belongs at the summit of the Peters canon, no mean feat in itself if we’re being honest.

The sparse strummed intro is a red herring as the song kicks into life after ten seconds or, giving in to the kind of muscular guitar motif that wouldn’t have been out of place on something like the Manics “Everything Must Go” album.

It’s a soft-hard dynamic that continues throughout the song, and Peters’s masterstroke is his ability to have enough happening in the softer passages to prevent them from being too fragile, whilst achieving the tricky task of giving the more upfront parts of the song sufficient depth and density without cluttering them.
As a result the song has an ebb and flow that is as natural as that of the tide itself, and I for one am more than happy to lie on the sand, let it flow over me and dream of happier times ahead.

Check out Martyn’s music on his website at http://martynpeters.com/ and keep your eyes peeled for local shows post-lockdown – he’s already agreed to a gig at the Late Lounge in Rhyl when his touring schedule resumes properly., date to be confirmed…