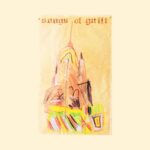 Irma Vep, that strange beast from Transyfechan has re-released the album ‘Songs Of Guilt’ – a haunting collection of despair gathered together whilst living in the squalor of his cohorts in the Manchester sewers. Both haunting and infectious….
The liner notes to this release describe it all far better than I can….
‘Released 2012 by Comfortable On A Tightrope on cassette its a 57 minute (does that mean it’s a DOUBLE??) record of OG Irma Vep four track idiocy.
For perspective, and for the people who have just come to know my stuff, ‘Songs of Guilt’ was the 13th Irma Vep release prior to the first ‘proper’ LP, HAHA…’

Rough Trade said “The latest salvo from Mancunian avatar Irma Vep packs a serious emotional punch. It’s also a record that sees Irma Vep delve deep into zero-fi electronics, drone and degraded glitchiness to supplement his macabre vocals and guitar work. somewhat like the rebel, country teasers’ frontman, Irma Vep illustrates his essential misanthropy with a healthy dollop of mystery and cruelty. There’s plenty of guitar seams running through the songs too, our solo maestro hasn’t abandoned his six-stringed friend, but the lengths he’s gone to on ‘Songs Of Guilt’ to make the listener revel in discomfort surely has to be applauded.”

Edwin Vep continues, ‘Songs of Guilt’ was recorded in Withington in Manchester at James Starkey’s and Jake Mckenna’s and Adam Brady’s spare room. I had no place to stay and they let me live there for free on the condition I tidied the house occasionally but I never did.
It was a shit tip. I was living on boiled veg rice packs Adam was bringing home from cleaning student halls at night. It was dark times and I don’t know what I would have done without them. Maybe that’s what the title is about.
This album reminds me of the Job Centre and being starving and mentally not all there but also loads of good stuff too.
I don’t think anyone plays anything on this apart from dbh smashing the violin on the live version of Be A Mother. It was recorded at a gig in Didsbury my pal Nick Mitchell put on where we supported Circuit Des Yeux and Pink Reason. That was a good one, oh boy. I think it’s the audio from a video Gary Kelly took? I could be wrong! –
I hope you enjoy it!’

‘This tape was lovingly ripped from Cassette by Tom House earlier this year. I lost the tapes and digital files years ago.’

GUEST COLUMN – The Barefoot Rascal – Where Have All the Punks Gone? COLUMN – Neil Crud – No More Gigs