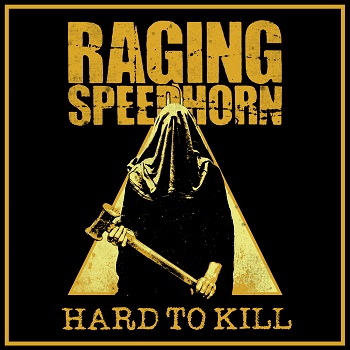 Now then. Ever since ‘Superscud‘ drifted through my eyes back in 2000 I’ve been a huge fan of Raging Speedhorn, and I’ve been lucky to catch them twice in the space of seven months with both line-ups. Supporting Phil Anselmo & The Illegals in Manchester (June 2019), and then the following January of this year at The Live Rooms in Chester [see review]. Which, incidentally, was NOT the venue for Speedhorn. Yes, amazing that it is only twenty minutes from my home, but the band deserve far better than that.

Anyway, on to this belter, which, incidentally, is the first album to feature new vocalist Dan Cook, who replaced the long standing John Loughlin. John stood down after an incredible twenty one years with the band. He will be massively missed, but we move on.

Opener ‘Snakebite‘ is pure Raging Speedhorn. This is brutal. It boasts all of Speedhorn’s traits in running riffs, aggressive vocals, hammering chorus. It has everything and is a absolute belter of an album opener.  ‘Doom Machine‘ slows down to a more Sabbath style groove but the band’s unique style always reminds you who this is and you never forget that once you hear it. It actually sounds like a collaboration between Speedhorn and Sabbath. Imagine that?

‘Spitfire ‘ is filled full of filthy grunge riffage whilst title track ‘Hard To Kill ‘ is another unforgiving track where the dual vocals really stand out.

Throughout this album Speedhorn have kept true to their unique sound and the way they easily flow through songs. A gift only Speedhorn can give and once again, we are treated to some pathetically filthy bass lines at the start of ‘Hammerdown‘ by Andy Gilmour. A slow burner with a main riff that would peel the skin off Ozzy himself. I love these sort of songs, because the riffs are so slow that you know what’s coming, but when it does come it’s even more magical than what you imagined. I can imagine ‘Hammerdown‘ being a welcome ‘pit stop’ for the fans when played live. It’s slow enough to catch your breath, but mesmerizing enough to take your breath away.

‘Hand Of God‘ boasts a neck throwing beat and credit must be given to Gordon Morrison’s drumming throughout this album as it is actually stunning in the way he knits each section within each track together with fillers and rolls. It’s not always complicated, but it never had to be with Gordon. The pure spine of the band.

It’s obvious that the guys have taken the quality of their riffing to another level on this album. Jim and Dave are producing some lovely work together. Even spine chilling on ‘Brutality‘ . What a great ending to this track, demonstrating what awesome guitarists this band possess.

Final Speedhorn track, ‘The Best‘ is another slow running, grunge defying number which tootles along and allows the climbing notes from both Jim and Dave to do all the talking. Guitar harmonies also noted guys! Nice. Now as you know I am not a big fan of cover tracks on albums, being that I think these should be kept for either a B-Side, or a live treat. However, I do think that the guys pull this one out of the bag with their cover of T-Rex’s ‘Children Of The Revolution‘. It also demonstrates that the band have another dimension to them.

Raging Speedhorn have released an album here of brutal imaginative class and it stands up there with their best, if not their best. Lovely.

Hard To Kill is released on Oct 23rd