[review by The Barefoot Rascal] 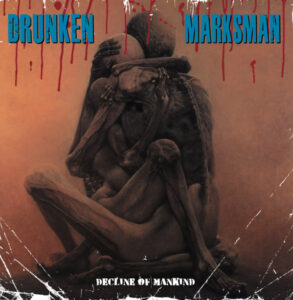 Sometimes you just stumble across a cracking album by accident, and that’s pretty much what I did with this one. I was on the Boss Tuneage Records website and had filled my cart with the new records by Diaz Brothers and Jaded Eyes (both great albums!) and decided on a whim to throw this one in too.
I hadn’t heard of Drunken Marksman before at all, but I liked the name and the cover art and decided I couldn’t go wrong for a paltry £10!
The album has been out for almost a year and is Drunken Marksman’s debut effort. The band feature south Wales legend Pig on vocals, he of such great acts like Classified Protest and Rectify, while the other lads were in a band called The Guntys.
The album starts off with Proxy War which immediately blasts into fast punk rock and hooks you in with a great chorus. Snapshots Of Britain carries on the same vein as Pig offers a dissertation of today’s broken Britain. Lyrically this treads all the usual punk rock paths and takes aim at many of today’s ills such as Brexit, the Tories and corporate greed. Free Europe powers along as though the 2 Sick Monkeys themselves are providing the rhythm. Side one closes with Hypocritic and the song starts with a guitar solo that Brett Gurewitz would’ve been happy to add to any Bad Religion album.
The album’s stand out track is Dance To The Apocalypse; a mid-paced growling bastard of a song which deals with mankind’s determination to destroy the only planet we have. The band’s self-titled song then picks up the pace again as Pig sings about the trauma of young men being in a killing zone and the lasting effects it has on their mental health. The British Army don’t mention that stuff on their glossy adverts… The next track Like A Disease reminds me of the Subhumans at their best, with the lyrics condemning the poison of religion. Final track Default ends the album on another upbeat punk note with more Bad Religion-esque guitar playing.
Musically Drunken Marksman don’t do anything new, it’s like a mix of old-school The Exploited, a dash of Motorhead and even a bit of melodic hardcore and they fuse it all together really well.
Let’s be clear, this is really good punk rock with quality lyrics, which is no surprise given the pedigree of its members. See, sometimes it’s worth taking a punt on a band you aren’t familiar with. Full drunken marks to everyone involved in this album, I can’t wait to hear some new stuff.
NEW SHOW – Neil Crud Not On TudnoFM #200 GUEST COLUMN – Skip Dwight – The Swingers – ‘Counting The Beat’