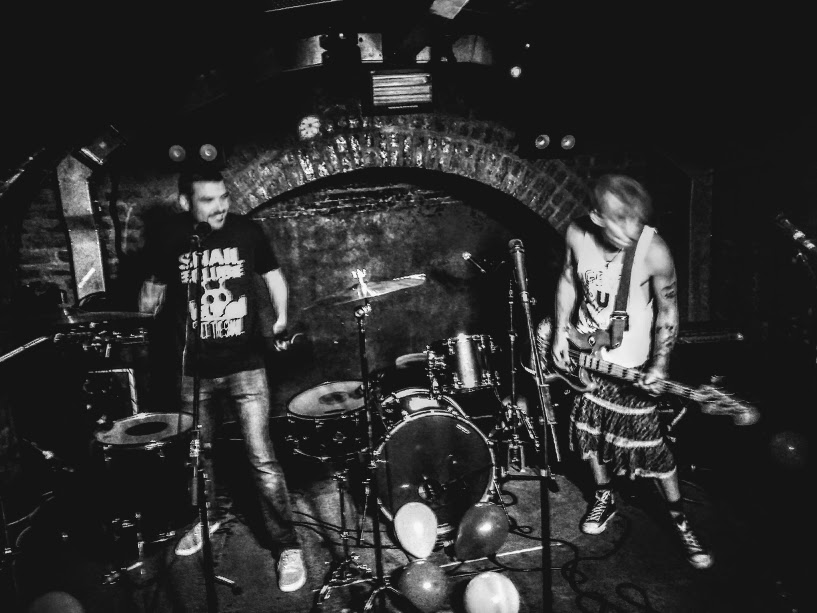 It’s Tuesday night and it’s raining in deepest darkest Brokenhead. The sound of a milk bottle toppling over followed by a cat screeching echoes down the dark alley… A gate opens and out pop Mike and Andy Crapson from their council flat… It’s bin day tomorrow and should they forget to put the green one out tonight then it’ll be another fortnight before it’s emptied again.
I’m a little star-struck; after-all, these guys are famous and it’s quite surreal seeing them in their natural habitat rather than on stage… I pluck up courage to introduce myself as a budding journalist and ask them what are Crapsons all about…

‘We would describe ourselves as… A loud, raucous, energetic punk duo crossing over relatable and humorous lyrics with a fuzzy distorted bass, and thrashing drums’ says Andy Gilbert. He’s the drummer of this two-piece outfit and the less scary looking. ‘We aim to put on a live show that leaves people wanting more. Our manifesto is to build up our repertoire of shows around the UK if not further, playing in new places and bring out some ear-bursting punk tunes with the Society of Losers lads. Most importantly though, have fun, and if it stops being fun … stop doing it!’

Having released their EP ‘Deaths & Spelling Mistakes’ on link2wales records late last year, which sold out pretty damn quick, Crapsons have embarked on an almost continuous tour ever since. They brought out a download only single Who’ll Babysit The Goths and subsequently signed to Society Of Losers Records last month (for a rumoured packet of chocolate digestives and a Salt The Snail tote bag). 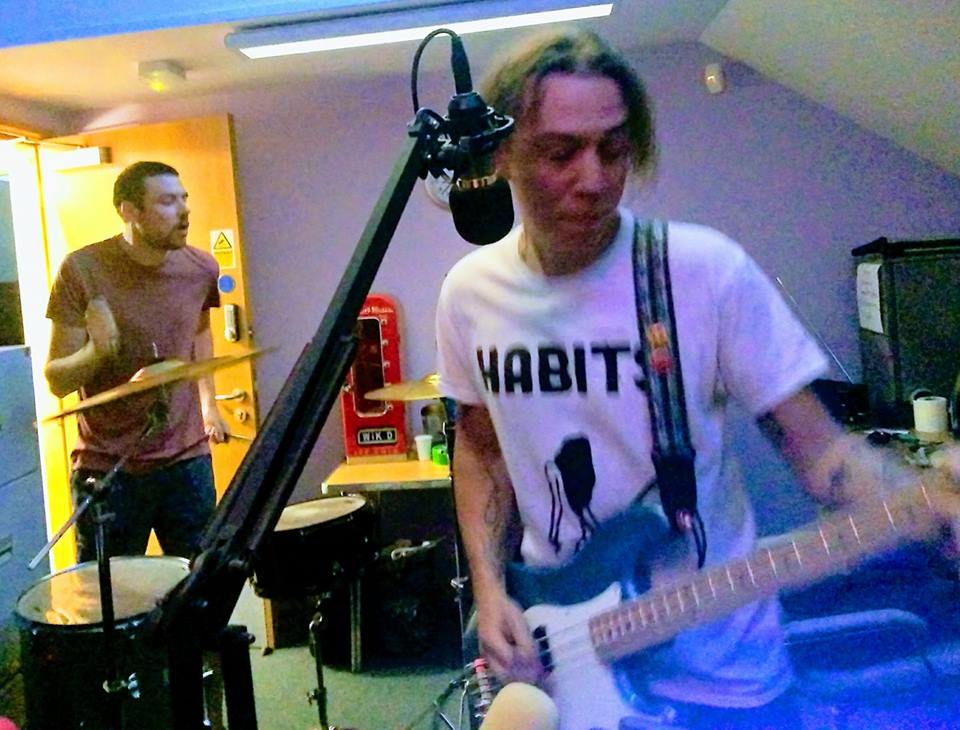 Our conversation turns to music inspiration and I pose the question: First record bought?
Mike Markey: ‘Bought with my own money – Oasis – Be here Now. Bought for me – Smurfs Go Pop.’
Andy Gilbert: ‘Technically my first was Manic Street Preachers – Everything Must Go. This has was actually bought as a gift. The first one I went out and bought with my own money was Blink 182 – Enema of the State.’

First band seen live?
Markey: ‘Sum 41 in Manchester Arena in February 2003 with support from The Mighty Mighty Bosstones and American Hi-Fi.’
Gilbert: ‘Status Quo in the Liverpool Philharmonic with my Mum!’

Best record bought. Best band seen…?
Markey: ‘The Holy Bible by Manic Street Preachers. Best band seen live of all time has to be The Rolling Stones – back to back hits for 3 hours playing like they were in their 20’s on the greatest stage of all time – The Pyramid Stage at Glastonbury Festival. Although in recent times I’d have to say Idles who put on a phenomenal show in Manchester last year- You could cut the atmosphere with a knife. Big shouts to our boys Salt The Snail too who have provided us with some bizarre and memorable moments live over the last few years.’
Gilbert: ‘Best album I ever bought is The Queen Is Dead by The Smiths. People will probably hate me for that as Morrissey isn’t everyone’s cup of tea, certainly right now! For me, regardless of his political views, I think the man is a genius and The Smiths are the first band where I had a true appreciation for lyrics and songwriting. Even if you don’t like Morrissey, you’ve got to appreciate Johnny Marr as a guitarist, right? Best band I’ve seen live, I have to agree with Mike and say Rolling Stones at Glastonbury. Was quite surreal watching them perform. Aside from that Pixies at Castlefield Bowl was quite special too and always enjoy watching the Manics live.’ 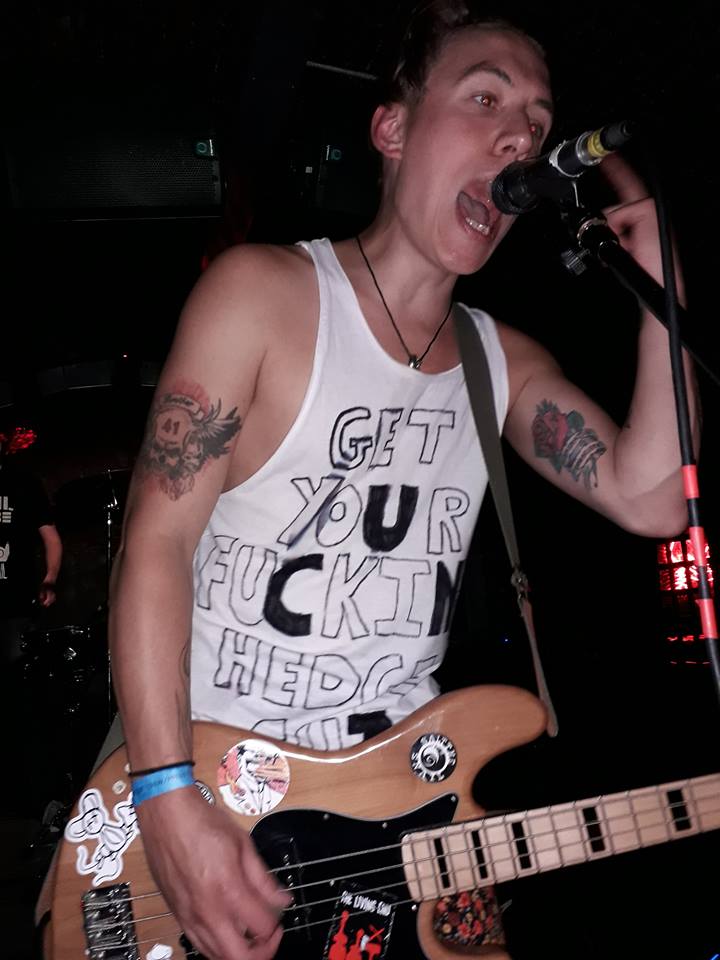 Having seen Crapsons live several times, I’m always taken by the energy and the crowd surfing… What are Crapsons’ Crapson highlight so far…?
‘Supporting Pulled Apart By Horses in Phase One Liverpool and then the following day supporting Half Man Half Biscuit in The Leadmill, Sheffield. The band we are named after (PABH) and the band we are most influenced lyrically by (HMHB) was a surreal couple of days. We played to so many people especially in Sheffield and it was amazing to see the fanbase grow just from that half hour performance. We had an enormous sense of pride afterwards, particularly with the feedback we were getting online. We were bumping in to people in Sheffield who were at the gig and they were complimenting us too. We also have to give a mention to some of the sold out shows we have been a part of.
‘Our EP Launch in Liverpool with Mr. Ted [err… and Spam Javelin ??], also in Derry with Salt the Snail, No Collusion, and Gas Hands, as well as being a part of Loserpalooza in Manchester. [These gigs] reaffirmed our faith in humanity that are people out there who love to go out and support live music. Getting to know so many great people along this journey has been great too even if they deep down think we’re a pair of idiots.’ 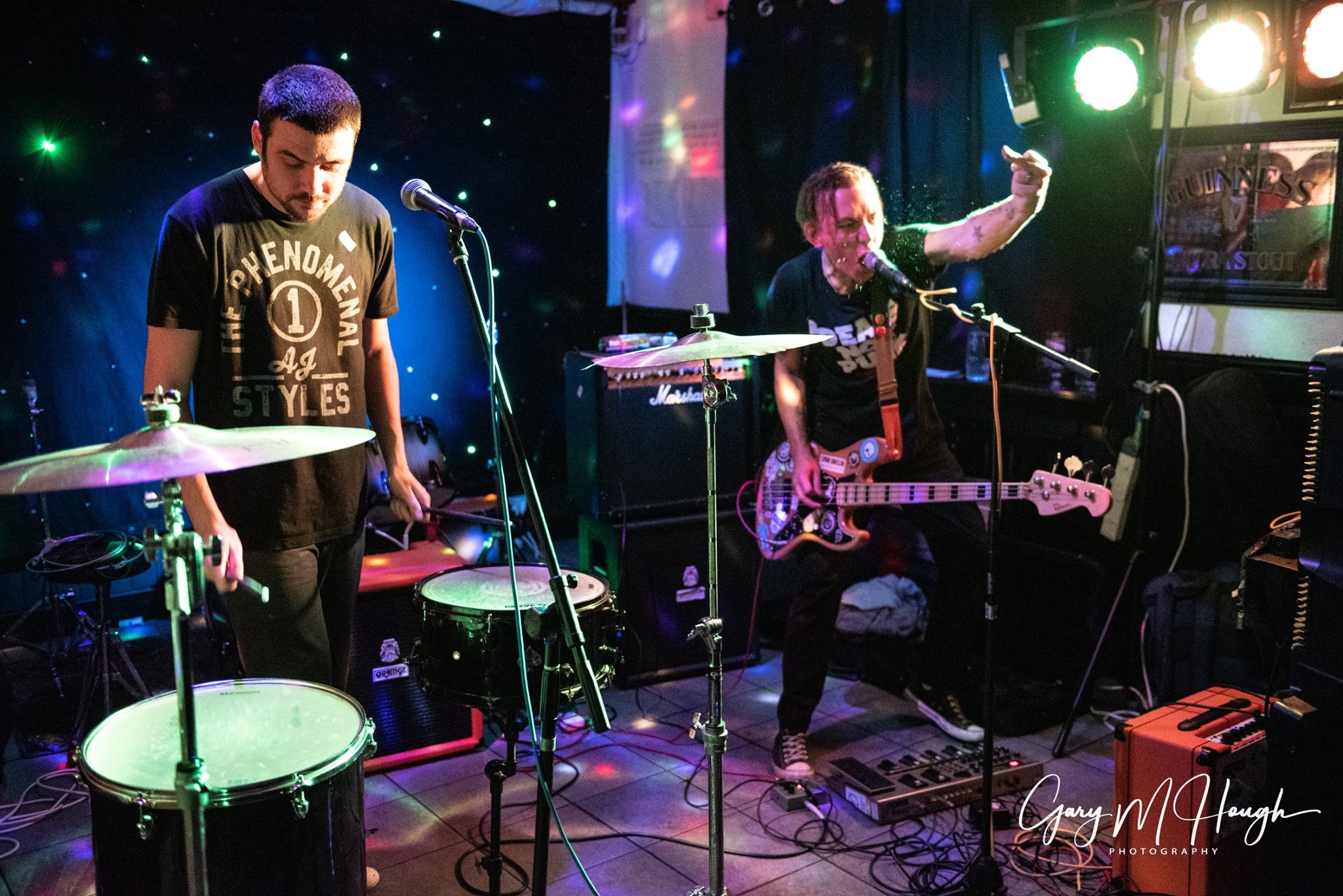 So, when you’re not being Crapsons or putting wheelie bins out, what do you do?
Gilbert: ‘For my sins, I’m a Tranmere Rovers season ticket holder and frequently travel to away games too (I’ve declined many gigs because I’m traveling to the arse end of nowhere to watch lower league football). I work in IT, watch wrestling and play video games – in other words, I’m a big nerd. I’m married to my beautiful wife Fay who sticks by all my hairball schemes. We enjoy traveling and eating out if and when we can.’
Markey: ‘Father to my wonderful 4 year old Daughter Bella, husband to my beautiful, very patient and understanding wife Hollie who supports everything we do with our busy Crapsons schedule. I also like going to as many gigs as possible, watch wrestling like a child and eating takeaways.’

So what’s your most embarrassing Crapson moment…?
Andy takes up the conversation, ‘When we played in Belfast in July 2019, Markey thanked the audience by saying “Cheers Dublin”. We thought he was going to get lynched. Luckily enough the crowd ended up seeing the funny side.’

I also ask him about their epitaph, ‘We would like to be remembered as… Crapsons …. Not “THE” Crapsons, Crap twins, Crap Brothers, Crampons or any other names that people have called us.’

And finally, would you ever check-in to A&E ?
‘Depends what injury, if it involves amputation of the hands then it’ll be difficult to do so.’