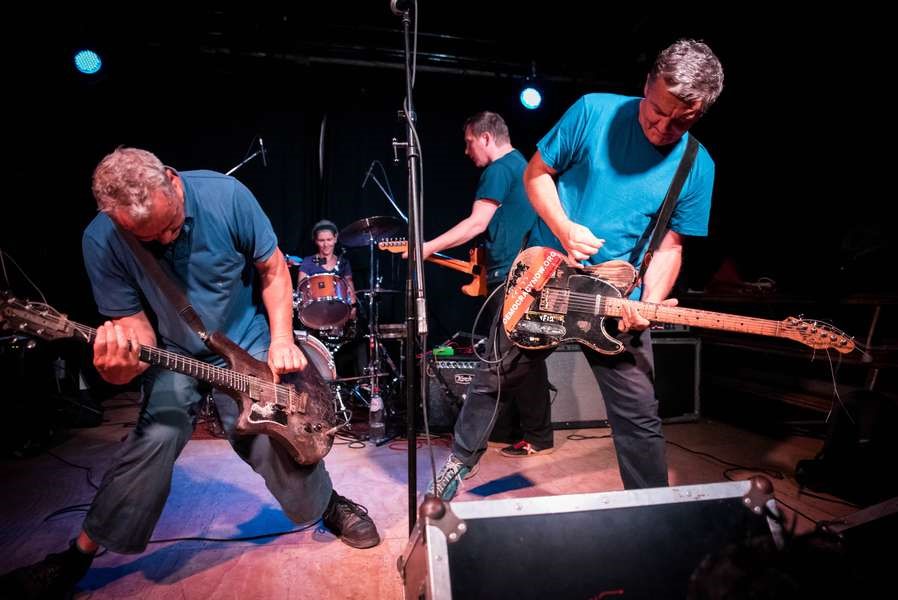 Café Oto celebrated its 10th anniversary last year, not bad for a ramshackle music venue with a single room, no stage with bar on one side. We were concerned to see a queue right around the corner when we arrived but we soon got into the room which you enter directly from street in the slightly gentrified surroundings of Dalston.
The venue is great though with low ceilings, creaky old furniture, and even a few bikes leaning against the wall. There is no green room for the artists to hide away in not as if The Ex were a type of band to do that.

Cafe Oto means both “noise” and “music” in Japanese, which was just as well as we were here for the experimental jazz anarchist punk music. The Ex were celebrating an anniversary of their own…. 40 years since they formed out of punk’s ashes in 1979.
They are difficult to describe. They tour Africa every year and engage in workshops with local musicians and children. They champion a rotating set of collaborators, often willingly taking on the role of glorified backing band for their passion projects with acts as varied as Sonic Youth or various jazz musicians.

They probably defy categorisation and the audience is a healthy mix from 18 up to about 80. Perhaps obsessive, nerdy characters that want to hear a great racket being made rather that being there just because it’s a cool place.
There are various support acts on tonight but mainly off shoots of the band themselves such as singer Arnold de Boer. He sings in Frisian, his first language, and the songs are direct stripped down and personal.

We get two thirds of the Dog Faced Hermans re united after 25 years with incorporated trumpet, snare drum and poems before some improv jazz piano and guitar mastery with Terrie Ex who hammers at his guitar with a drumstick.
We then have a twenty-minute saxophonist solo set from Ada Rave who is another improviser who manages to keep over 200 audience members in respectful silence whilst she reminds me in parts of trout mask replica.

The Ex were on last and it was over way too soon because of the residential area 11.30pm curfew. Katherina Bornefeld is a brilliant driving hypotonic drummer whose repetition builds up Can style, which makes it impossible for you to keep your feet still.
This was the third night of their residency so the band were in party mode and mixed it up with an Ethiopian set that had an old man in front of me dancing so much I was a bit worried he might do himself some damage.

Café Oto has a wonderful atmosphere, and The Ex clearly enjoyed themselves as much as the lovely audience. Stewart Lee (the comedian) was in attendance with a huge smile on his face as the band created a energy that made you feel like you were 17 once again. It certainly wasn’t the beer which at £4.40 for a half meant I was most certainly sober but The Ex themselves who mustered up a glorious racket that actually danced at one stage (when no one was looking of course)

Here is to the next 40 years of anarcho punk jazz!!