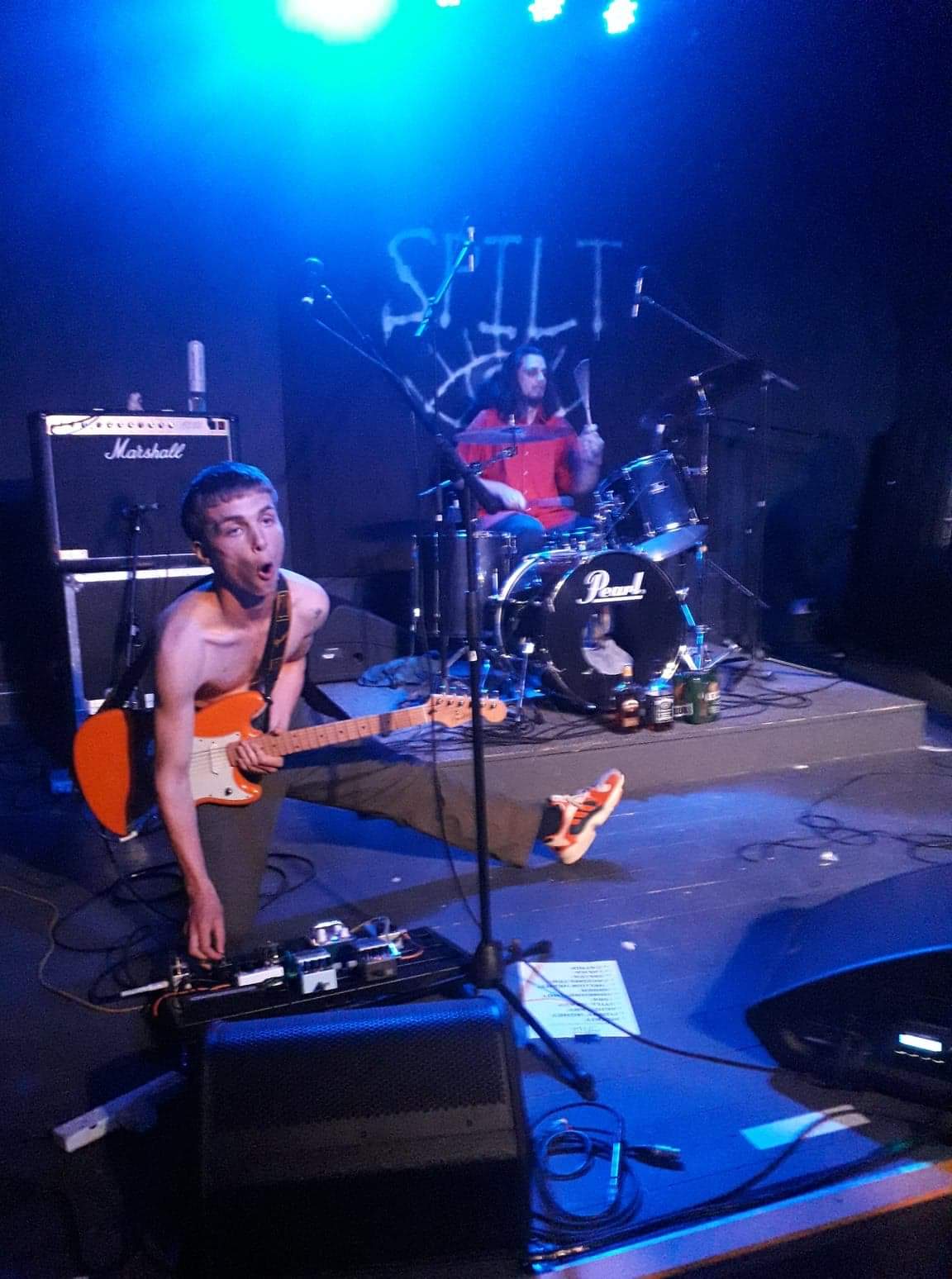 The Live Bar in Warrington has been open three weeks. It has a cool vibe and is purpose built to function as a live bar. The black decor and walls are adorned with those icons of the past; the Bowies, the Jimis, the Beatles… Tonight is however most certainly about the future and the average age of the sizeable crowd can’t be much more than 20… That’s great to see, and bodes well for the future of ear splitting music… 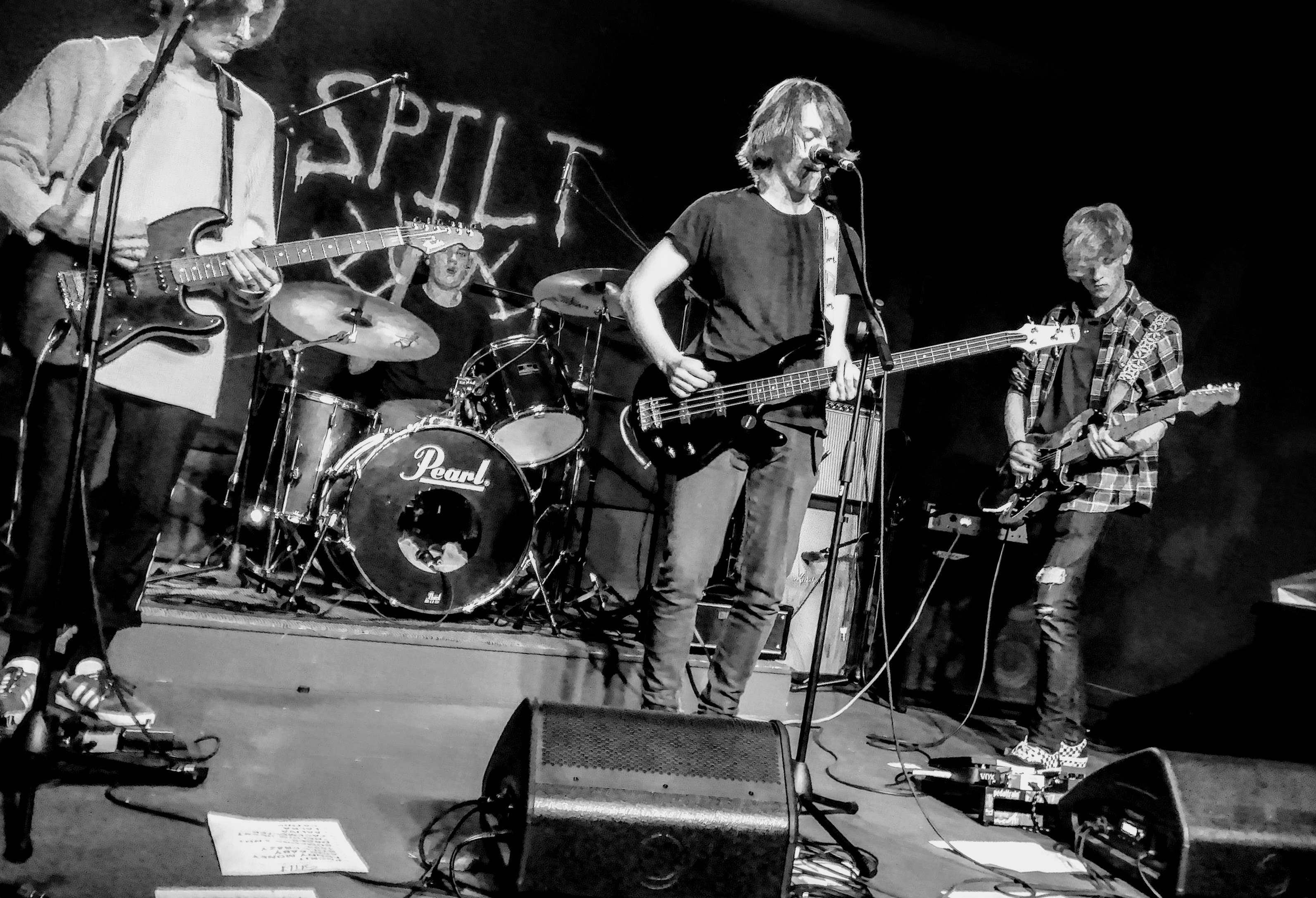 This is where we are at the present… Kids who have been rifling their cool parents’ record collections are creeping out of their bedrooms, confident to get up and play to their peers.
I’d say Hollow Vandals have weird parents… The sound of this local band straddles the line of balls to the wall rock n roll to grunge. A couple of rubbish songs almost detracted from what they’re about, which is making a noise, hence the title of their debut EP ‘Turn That Down…I Can’t Think!’ And believe me; even with earplugs it was fucking loud!! Cool guitaring and drumming come to the fore amid sometimes odd shared vocals ranging from almost crooning to bad Cobain. 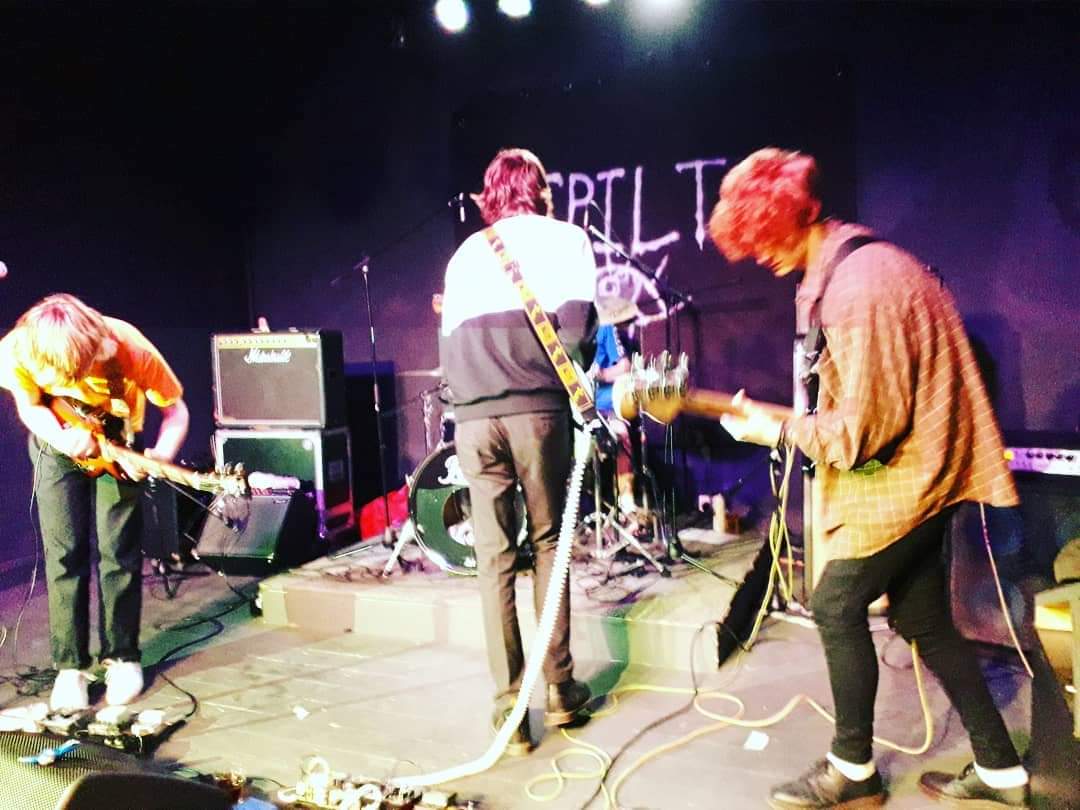 Also from Warrington hail The Lotts [pic above by Tracy Howarth] whose debut EP ‘Out Of It’ hit the streets last year… They deliver a sixties (but modern) psyche-garage wall of noise and feedback with cool spaced out vocals. Bursting with energy and confidence. I’d happily buy an album by The Lotts and play it til it broke, then buy it again… (record one please!!) 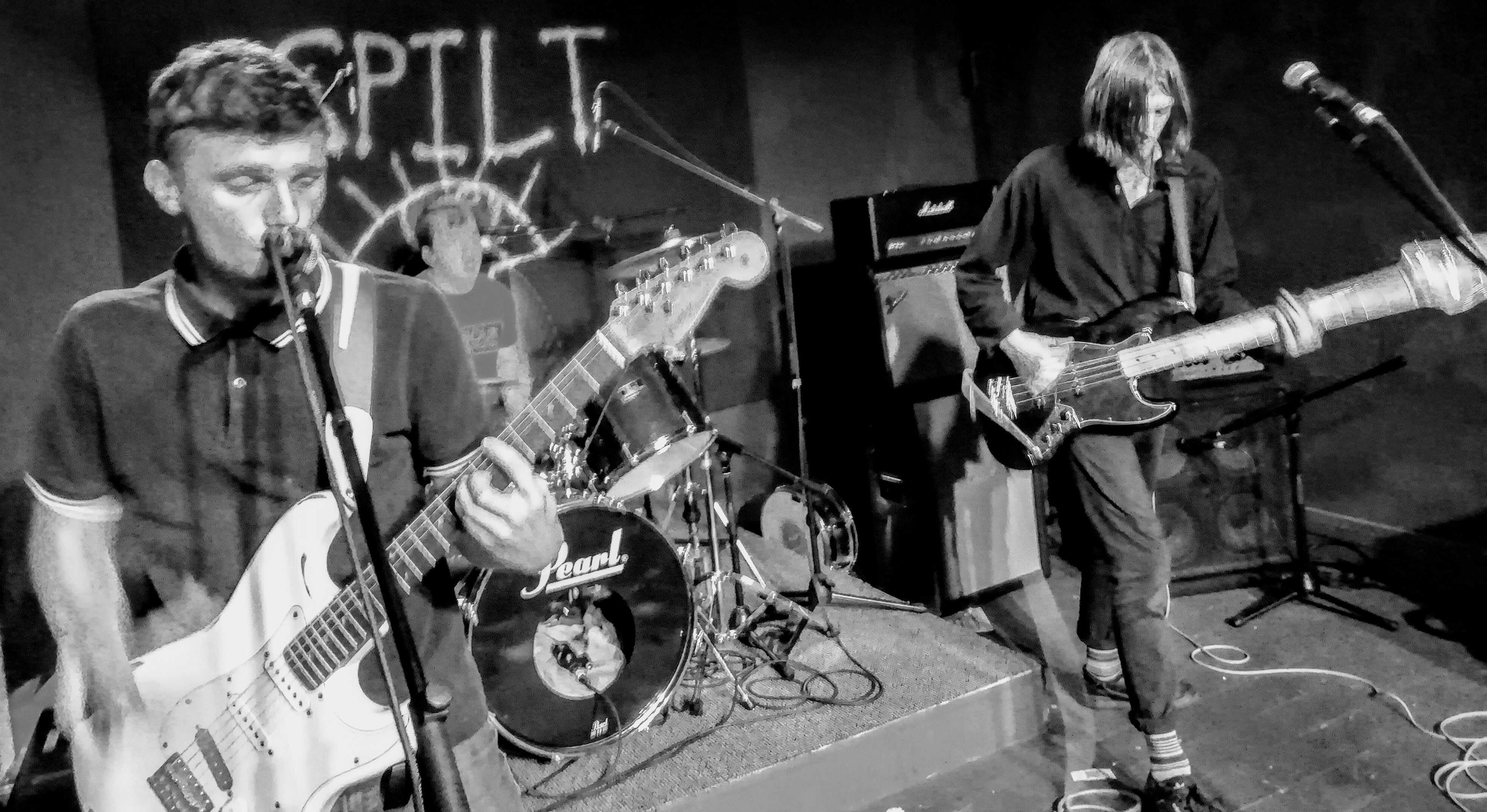 A change in tack for Serratone who are a three-piece from Newton-Le-Willows. They’re fronted by a confident looking football casual. He’s wired and talented, and ably aided and abetted by a thundering bassist and Class-A drummer. They are described as hard rock-grunge… Hard to label really as it swings from almost street punk to hard rock back to (almost) street punk – bit like Cockney Rejects’ career, only in the space of one gig! The guitar is crisp and the emphasis is on the concise vocals rather than layers of FX… Great entertainment. 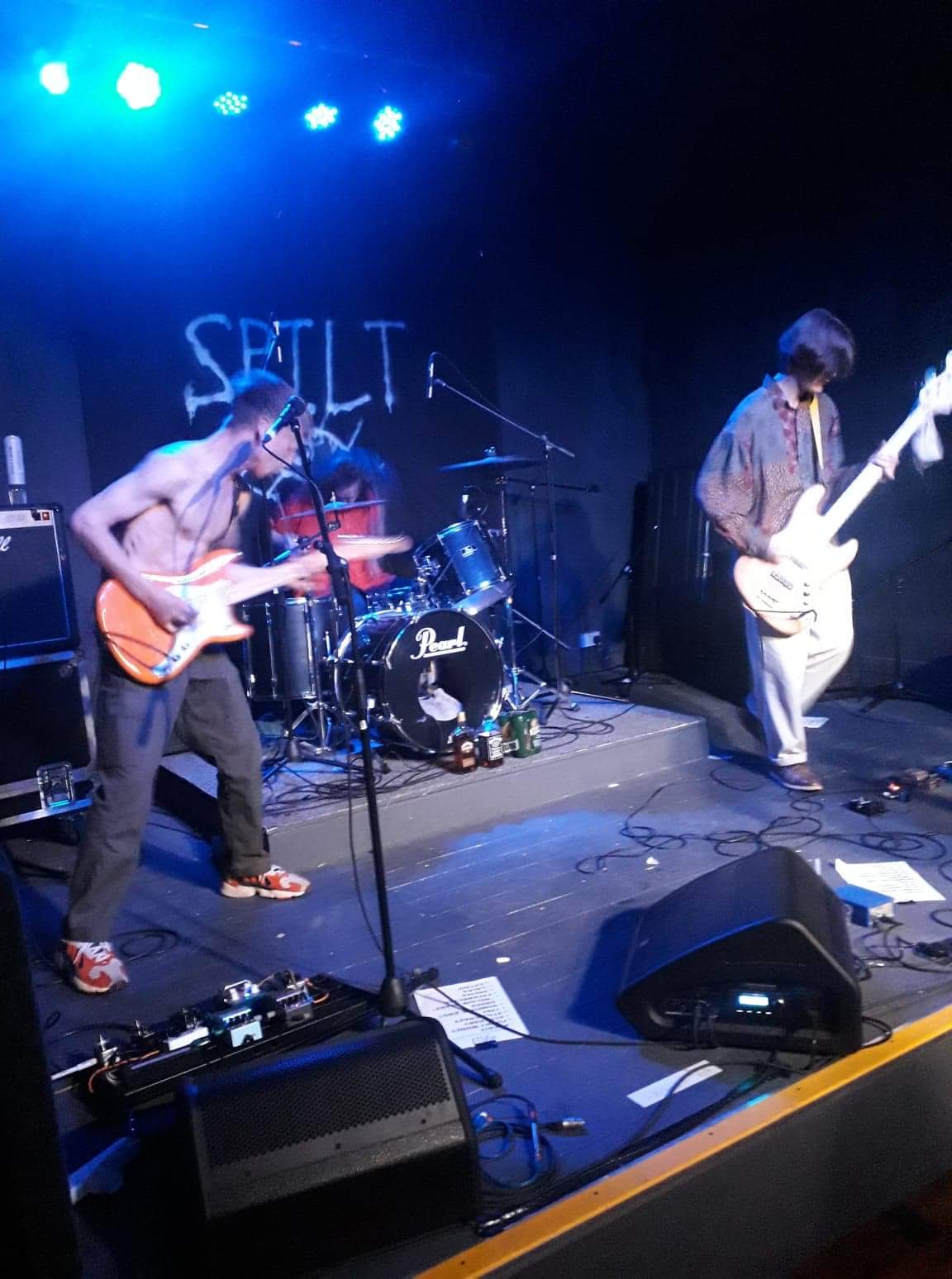 Three bands on the trot is quite hard going after a hard day at work and then an hour’s drive straight here. Outside on this Solstice Day, Warrington is turning into the Wild West as the pissheads and dickheads take to the streets for the weekly ritual of getting pissed, getting punched and getting laid.

Indoors, Spilt are taking to the stage… [pic above and main pic by Tracy Howarth]… They’re a bit of an enigma insomuch that they don’t seem to rub the same shoulders as we do… But fuck me… What a great facemelting band… What a performance..! Warrington was razed to the ground, rebuilt then flattened again… Spilt are fucked up, drugged up and if they had a needle they’d shoot you up. They sloshed JD from the bottle, handed it to the front rows and proceeded to make a most unholy, yet divine racket. The singer-guitarist looks like Bez on M-CAT who has lost contact with external reality He is the focal point as he gurns his way through song after superb acid-laced song – challenging you to look him in the glazed eye, seemingly just one kill away from being a murderer.
The formula is a psycho-garage form of punk, laced with a Butthole Surfing maelstrom of paranoia and impaired emotions that leaves you shell shocked. Did someone say they’re from Runcorn? That would answer a lot of questions….
10/10.