I had never heard of Girl Band, nor of their critically acclaimed 2015 album ‘Holding Hands With Jamie’, nor would I have travelled across Europe to see them when they’re a boat ride to Dublin from the North Wales coast. No, we flew in from Budapest as stopping in Berlin for a night almost halved our travel costs; such is the beauty of Ryanair. The budget airline also offer boarding entertainment in the form people arguing the toss over their ridiculous baggage size allowance… You pays your money you takes your choice.

This Dublin ‘experimental rock band’ are pretty damn good… Even in these days of gender fluidity, I’m pretty certain there’s no girls in the line up, but what we do get is a guitar band driven on swathes of FX, pounding beats, melodramatic segues and a tsunami of noise. Their follow up album ‘The Talkies’ has recently emerged and they’re out to promote it. Here at Bi Nuu there’s a large crowd high on anticipation.

There’s no grand entrance, no audience acknowledgement, and minimal movement as they grind through the gears, kicking off with a cool yet basal drumbeat and a monotone voice. Visually, Girl Band are more ceiling-stare than shoegaze, but when they decide to get going they hit you like a ten-tonne truck… 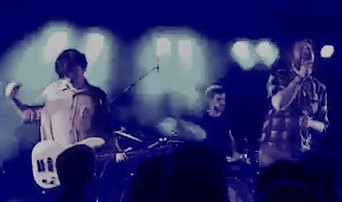 Take Shoulderblades as an example; there’s a long broody intro until it thumps in; and I mean THUMPS IN… the drums and bass pound through your being like a giant’s pulse. Static singer Dara Kiely lets rip, tearing a hole through his bedraggled beard… He’s nonplussed when an over-enthusiast leaps on stage to grapple the microphone from him, before bassist Daniel Fox intervenes.

The crowd are more up for it than the band and sway during the lulled TVAMesq bits before entering a mosh frenzy when the pedal hits the metal. ‘They hide bodies under my garage…’ screams Dara perpetually in a Mark E.Smith drawl.
Girl Band make a statement… ‘We are the Sonic Youth of the future’ – They didn’t actually say that, but I’ll stand by the sentiment…
Pears For Lunch anyone?