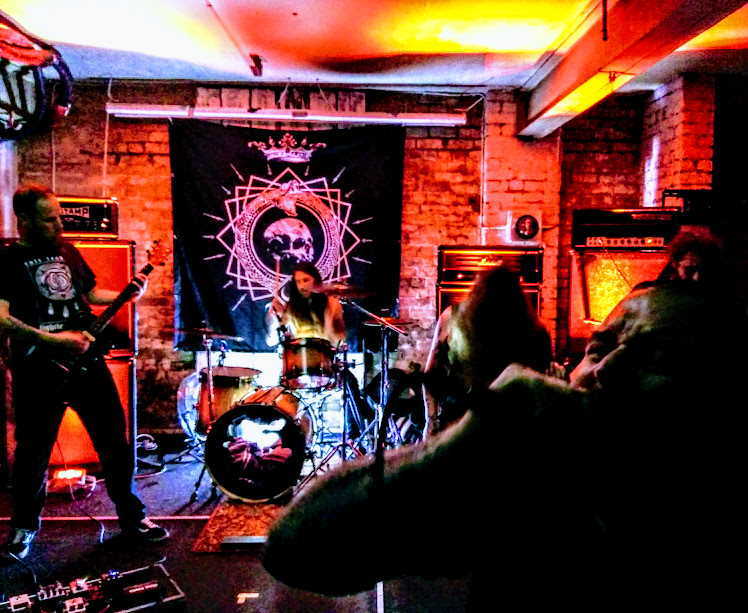 Like last week’s old skool punk gig, tonight was another trip beyond the realms of my hardcore comfort zone and into the pit of unfathomable doom. 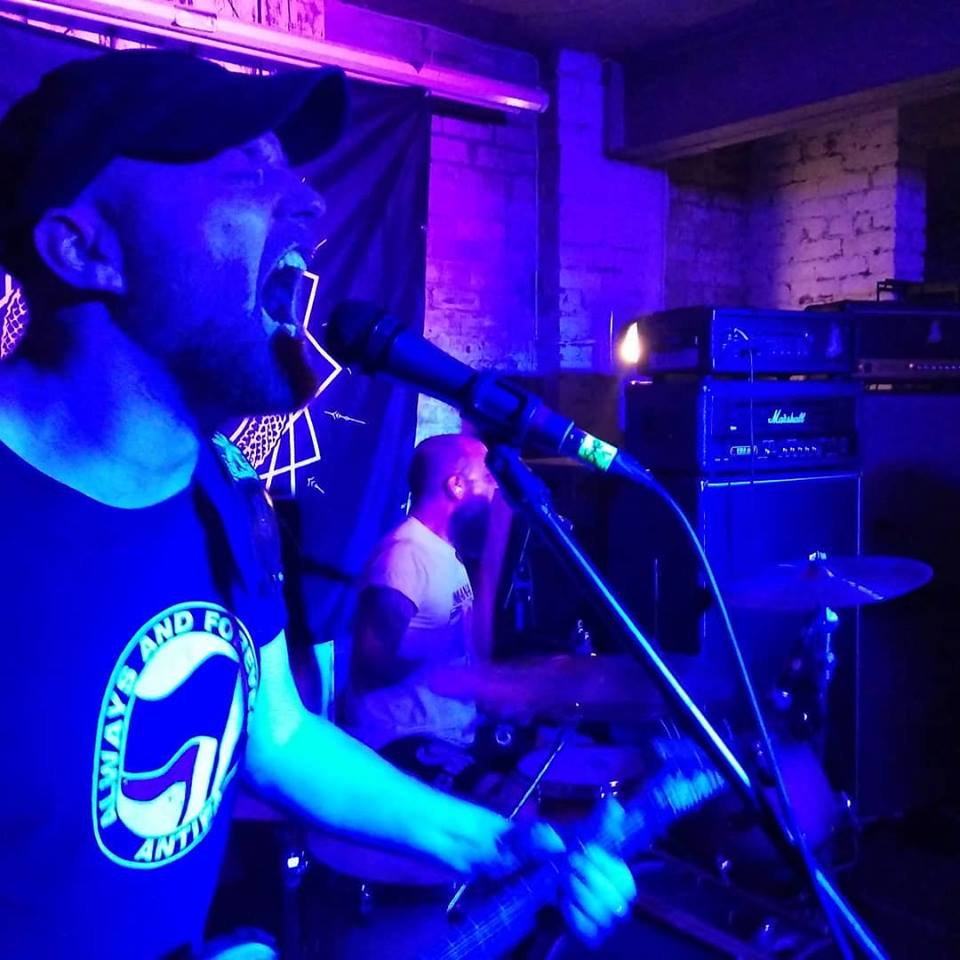 Sludging slowly across The Pennines from Leeds come Groak. The name alone is enough to draw you in and it soon became apparent that this three-piece should be hallmarked. There’s plenty grind in their core and most songs are a comparatively short 5 or 6 minutes long. Rasping vocals from the guitarist, accompanied by cheese grated rants from the sweaty drummer. They have a lot to say, although you’d never work out the insightful content without help… ‘Chase it with greed and gout, stumble and hurl, shovel it in you pig, ungenerous bastards will watch you starve, and stuff themselves full of tried and tasted, morsel that stripped of substance, forced to squander.’ (Is that a passage from the Bible?).
Once I had adjusted my body clock and droned myself down to Groak’s level I found it wholly entertaining and have sought out more to satisfy my lustful requirements. 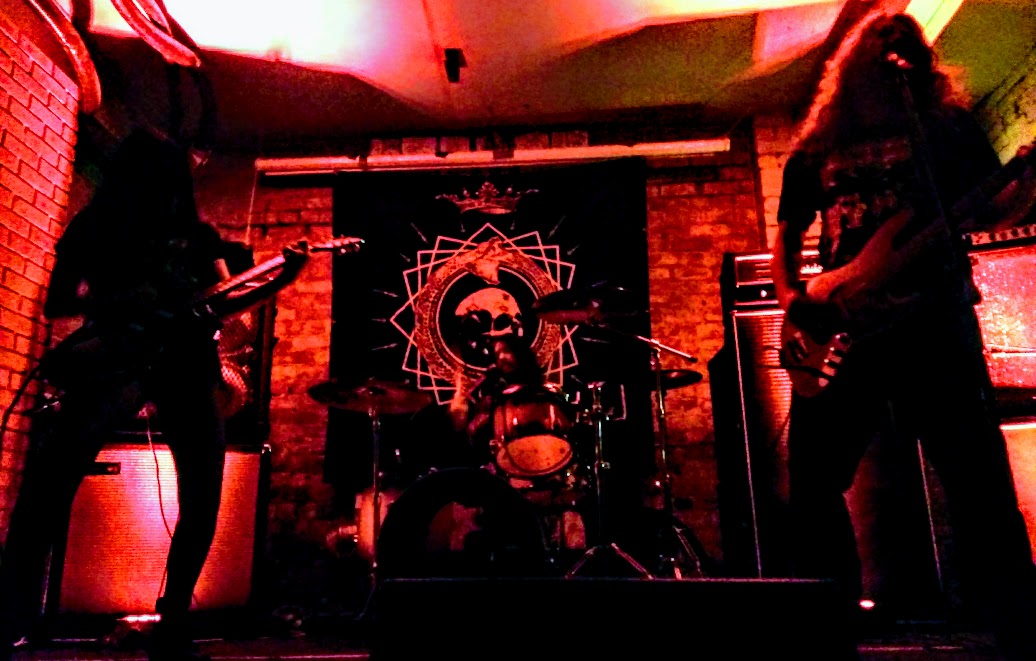 The below ground setting of the venue (full name; Sound, Food & Drink), with it’s bare brick walls and utility pipes running along the ceiling is befitting the doom that is about to come… Local heathens Coltsblood come armed with despair and the intent of inflicting misery upon all those trapped inside. I was both compelled and mesmerized, too scared to leave and too afraid to watch… Every droning chord that Jenna McNulty axed you with, every death rattling scream her namesake John roared and every pounding war drum smashed by Jay Plested shook every bone in your decaying body… Absolute unserenity… There was no hesitation in buying their double 12″ album and I ascended into shimmering darkness. 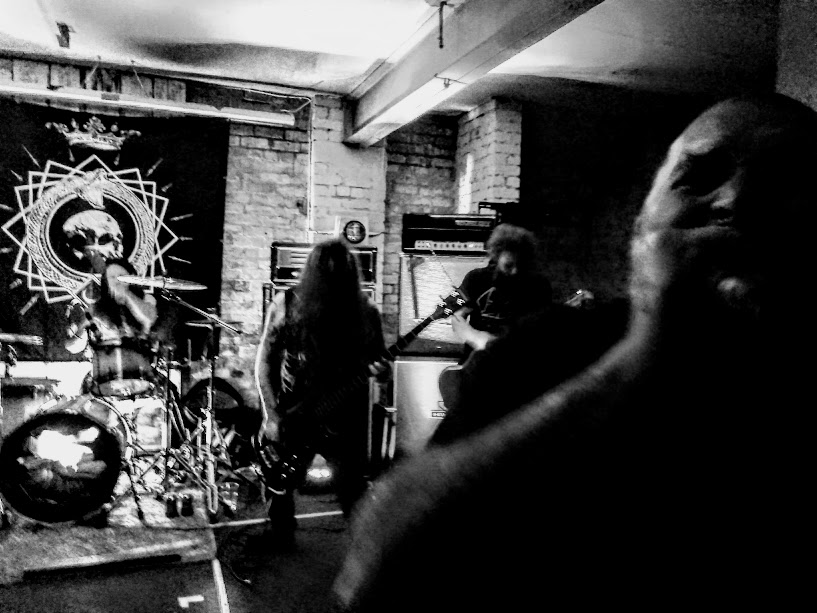 There was more…behold, Iron Witch, and like Coltsblood, it felt like there wasn’t a song or piece less than ten minutes long… Compare this to some of the thrash bands I watch, who clock in an entire set in twelve minutes, I was pre-prepared to be bored by the longevity… Wrong! As my travelling companion Garry Davies said as we headed home, ‘I enjoyed every single minute of the bands tonight.’ His words rang true as Liverpool’s Iron Witch vomited their belly full of rats into your face. A bit more metally than their band buddies earlier with a vocalist (Dave Mould) free to rage and roam the floor. Drummer Jay, having smashed the kit into oblivion for Coltsblood is still behind the kit, looking knackered, but there’s no salvation as neither he or the band show any mercy on the ear drums of a stunned audience.
What a great night…