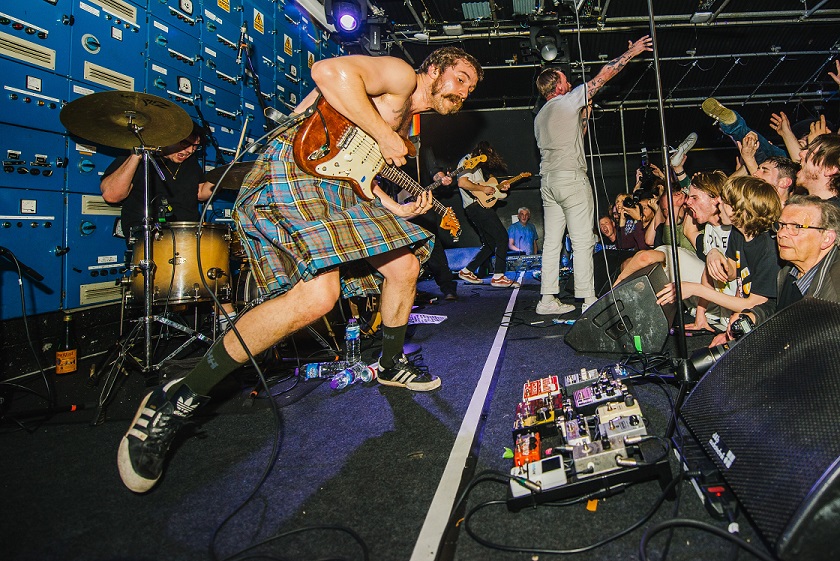 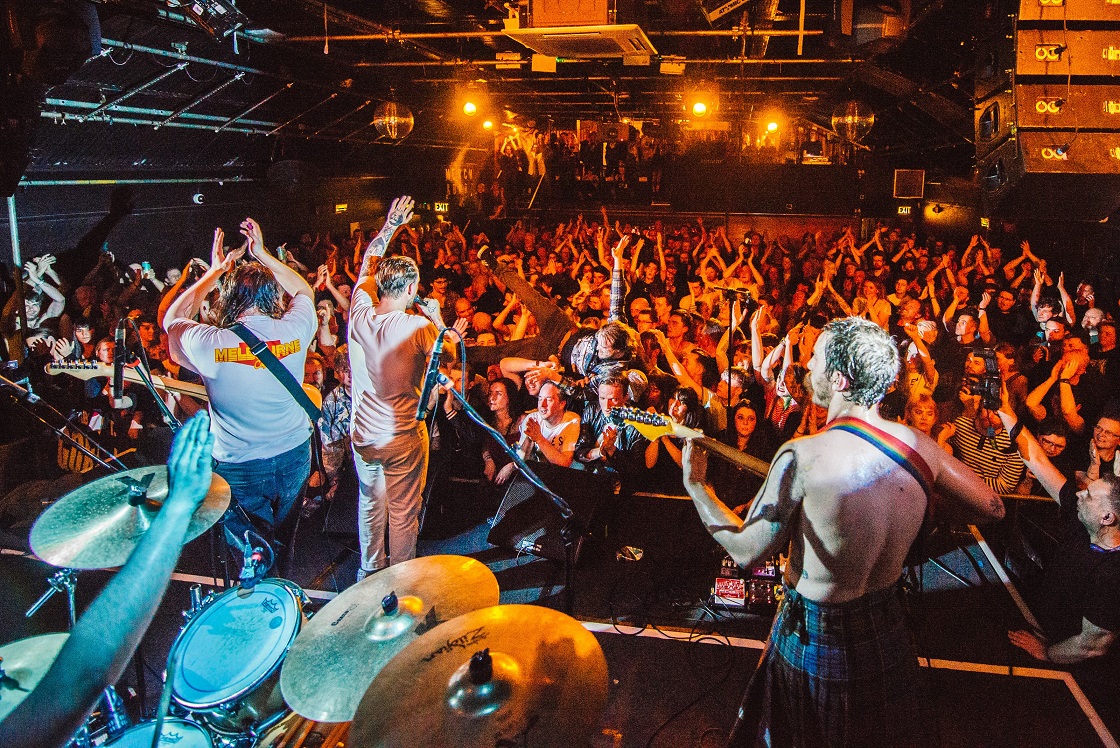 Idles are not a new band, they formed in Bristol in 2012 and by their own admission struggled to find their sound initially. Listening to their earlier stuff there is an undeniable shift from their early ‘Meat’ & ‘Welcome’ releases.  It was during the writing of ‘Brutalism’ that Joe suffered the terrible trauma of the death of his mother and it was this that he says gave him, and the band new focus. The album was released in 2017 to critical acclaim and for a debut album it is right up there with the best of anything I have ever heard.
The band’s reputation has been growing rapidly as they have toured their way around the UK & Europe taking in numerous festivals along the way. The impact has been so great that when the ‘Unity’ Tour was announced earlier this year it sold out instantly leaving myself and probably a lot of others ticket-less and frustrated. Luckily for me I managed to get one via their online community page!
Tonight I’m popping a double cherry, this being my first time seeing the band and also my first visit to the venue ‘Gorilla’. What a great little venue this is, at a guess I’d say it maybe holds 500 and it was absolutely rammed! The support band Lice also hail from Bristol and they benefit hugely as the venue is a good 75% full when they take the stage. They describe themselves as a ‘satirical art punk band’, I personally couldn’t pigeon hole them but that’s a good thing right? The sound is bass heavy, punky and vocalist Alistair definitely has an air of John Lydon about him in his vocal style and stage presence. I also thought there was a touch of an Andi Sex Gang vocal style too. They grew on me as they played their set which went down very well. They have just released a single ‘Stammering Bill’ on Joe Talbot’s Balley Records and with some decent exposure we may well be hearing a lot more about them.
(pic below pic Mandy Ashton) 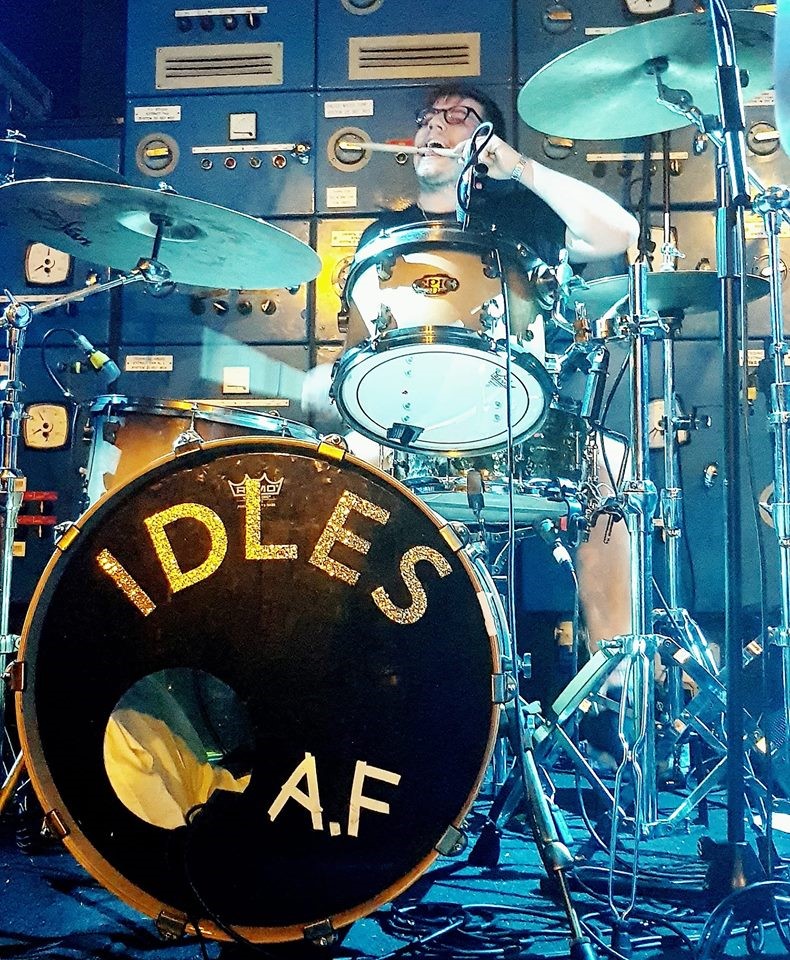 Idles‘ Joe Talbot is first on stage before his band, he prowls the stage pumping himself up ready for an onslaught. The band follow on and launch straight into ‘Heel/Heal’. The power is immense, Jon Beavis thumps out an almost tribal style beat, powerful and tight, bass man ‘Dev’ adds depth with a steady distorted bass sound that growls along. Those guitars! It’s a twin bludgeoning assault of the ears by Bowen and Lee and they both have a superb stage presence, in fact the whole band do Every member is 100% performing and it’s right on the money. Joe’s lyrics are intelligent, honest, powerful and intense, it’s aggressive in it’s delivery and he’s passionate with his message. The crowd is almost frenzied at times and the younger ones constantly stage dive into a sweating, moving sea of flailing  limbs! The band too love it, there’s no stage barriers so it’s pretty much a free for all, not an ounce of bother anywhere though, in fact both guitarists go crowd surfing  also!
The set list includes all the live favorites, ‘Mother’, ‘Well done’, 1049 Gotho’ and other tracks from the album. We are also treated to some new songs from the recorded but as yet untitled second album. New tracks include ‘Love Song’, I’m Scum’ and the excellent ‘Rottweiler’ which is Joe’s take on the British press, it’s also the last song of the set.  Joe thanks everyone and leaves the band to thrash it out, again Bowen and Lee go crowd surfing, I was doing my best to film it and I lost sight of Lee until the end of the song when I realized he was stood behind me still playing on the balcony! Excellent, a truly superb gig, once the lights went up I noticed how varied the age of the crowd was, lots of young ones, but also lots of old bastards like me, a guy next to me said “it takes you right back doesn’t it?” it certainly does!
There’s not many dates left on the UK venue tour now so your best bet of seeing the band is on this summer’s festival circuit, I’d be highly surprised if the band are playing venues as small and intimate as this after this year. 11/10
http://www.idlesband.com
https://www.facebook.com/idlesband
Set List
Heel / Heal
The Idles Chant
Faith In The City
Mother
Queens
I’m Scum
1049 Gotho
Divide and conquer
Benzocaine
Danny Nedelki
White Privilege
Exeter
Love Song
Well Done
Rottweiler
Neil Crud on TudnoFM – Show 104 – with Saint Stevie in Session VID OF THE WEEK – Salt The Snail – Spanish Announce Table