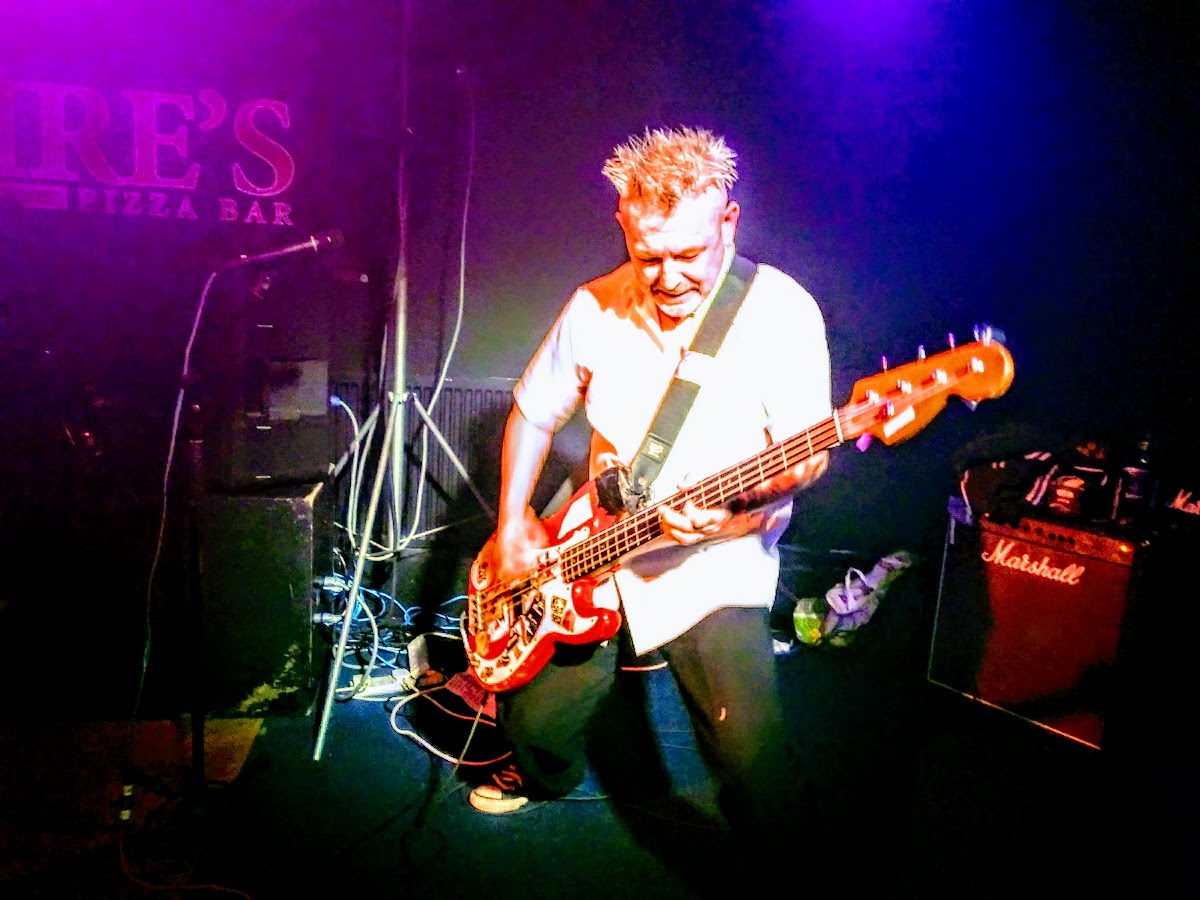 2 Sick Monkeys are on their farewell year before they call it a day. Over a thousand gigs to date and my one regret is not seeing all of them! They are back by public demand, having announced that 2017 was to be their final year!
Here we are in the wonderful surroundings of Maguires; that blackened room at the back, adorned with posters and stickers of past (and present) bands. That tempting whiff of delicious pizza from the front. Those (expensive) bottles of real ales, and of course great company in the shapely form of Andy Fatman, Ste Sync and MWJ. 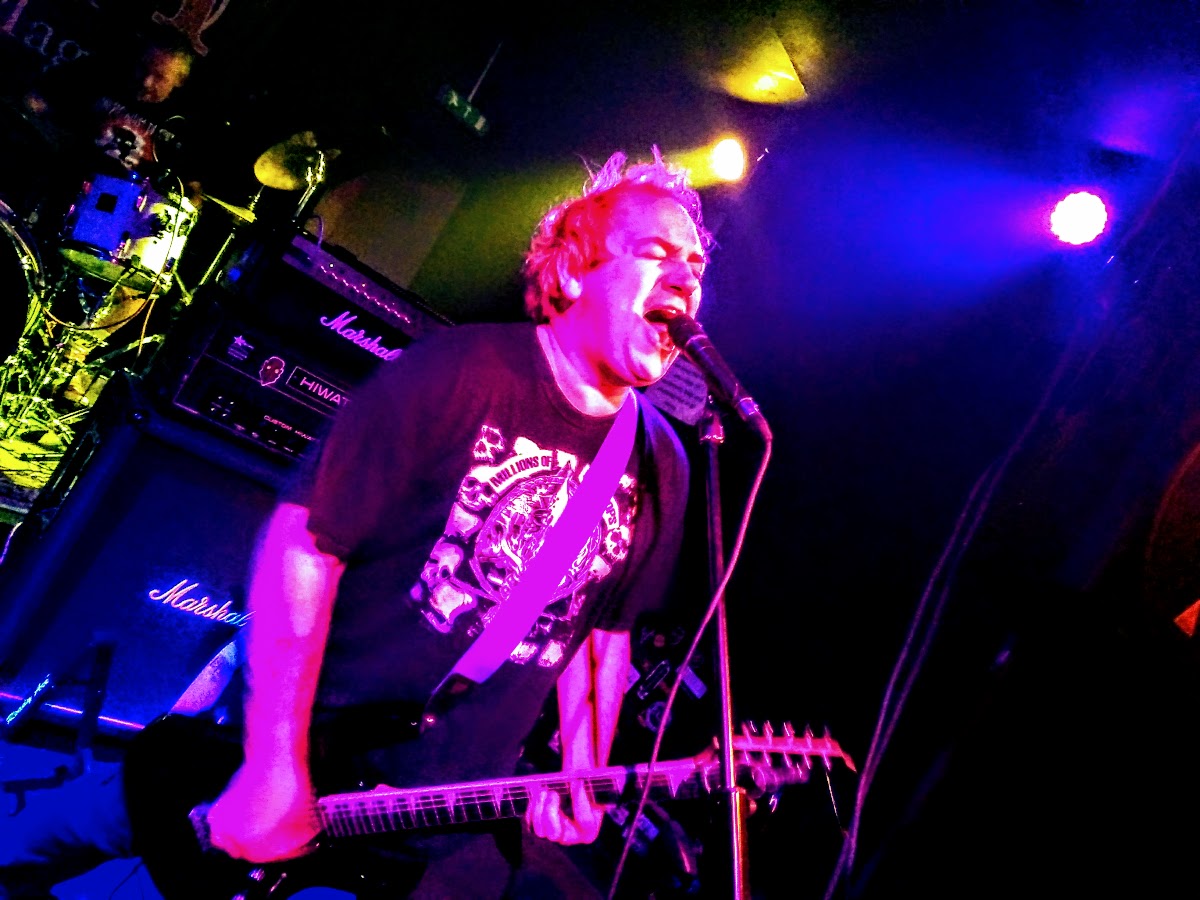 From South Yorkshire and featuring ex-members of Chewed Up, come This Is Not A Drill, who slice through a razor sharp no nonsense set. Guitarist/vocalist Lee is a doppelganger for a young Mel Smith and it would’ve been ace if they had launched into Not the Nine o’Clock News’ Gob On You,  but that’s where the likeness ends. Their ‘Hysteria-Hypocrisy-Lies’ CDEP is up there with the best £2 I’ve spent in a long while and it reflects their set. It’s brash, ear-splitting and full on heavy about social messaging (hence the Crass-style sleeve). There’s a huge chunky bass sound on stage accompanied by 100MPH drumming and, as always a great overall reverberation thanks to Ian at the sound-desk. (bandcamp) 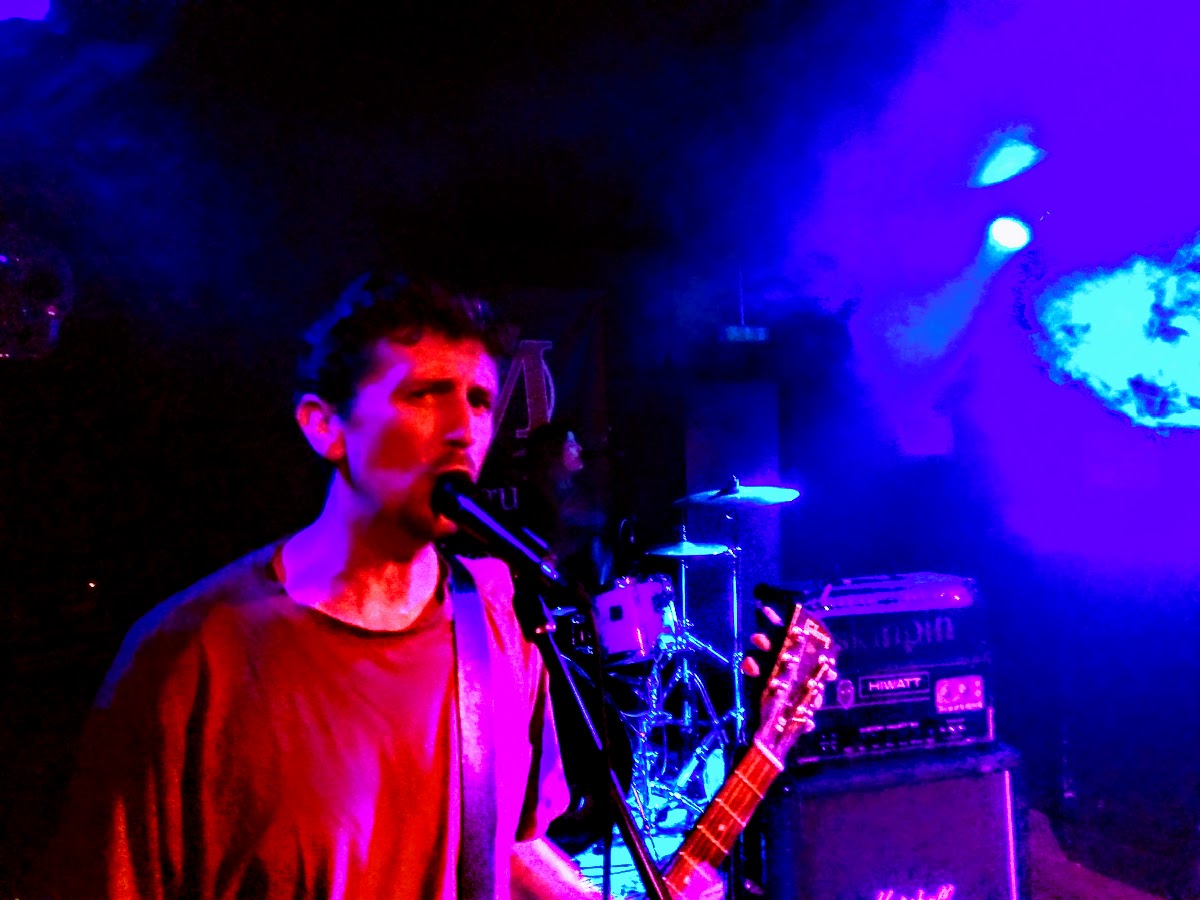 We punk-types of North Wales are quite fortuitous in that we live a mere 60 minute drive from Liverpool (50 when Sync is behind the wheel). If we lived in the city, we’d be skint alcoholics with all these shows to go to, so being provincial means we try to get over at least twice a month.
Coming a lot further than ourselves, and having the misfortune to be touring the UK during Roadworks Season are Sydney’s Skinpin. Being on tour for ten months and snarled up in traffic meant a late arrival, and perhaps added an extra edge to their performance; or maybe took some gloss off? I don’t know having not seen them before. What we did get for our money was some angry fucked up shit from Oz in the form of Rikards up front and insane drumming from Anna (they’re looking for a bassist). It’s very fast, it’s very punk rock, and it’s very irate (in a nonchalant way). The ‘fuck you’ subject matter draws attention; I Hate You is self-explanatory, ‘This one’s about a cafe in Brisbane… Don’t go there.’ Clocking in at about a minute per song, each one is like being blasted by an automatic needle gun. ‘We’re gonna finish with a song about people we don’t like,’ say Rikards and they smash into Happy To Watch You Burn. Excellent. (bandcamp) 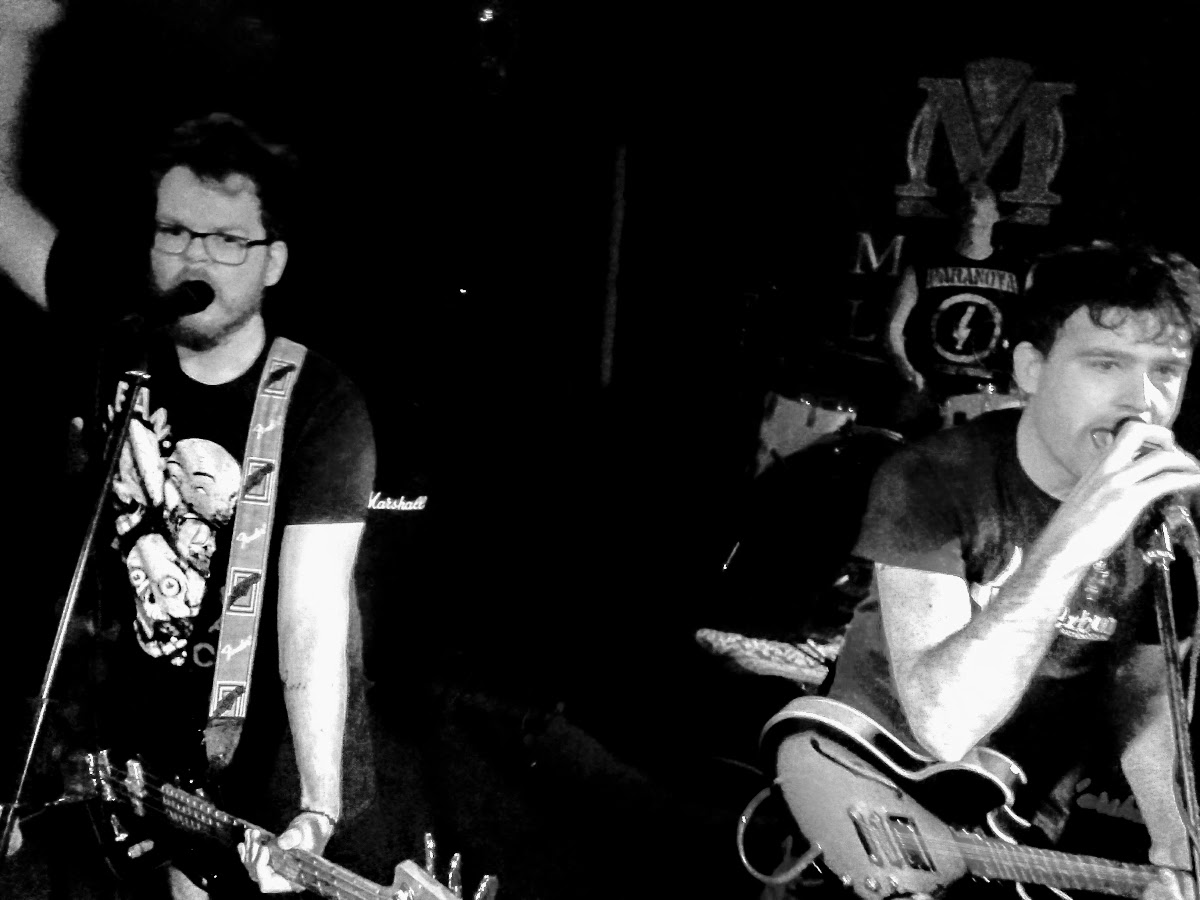 ‘Join the army it’s like a video game, but you might not reach the next level,’ sings the heavily-Irish accented Villy Raze. The Dead Class reformed especially for this gig, to pay homage to the fact it’ll be the last time 2 Sick Monkeys play in Liverpool. Villy, Jake and Tony Vermin suggest we should Be Afraid more and more each day, but they give the packed room a nostalgic pogo down the old school punk rock lane. Lots of people join the hippie in the Hawkwind t-shirt who’s been dancing throughout and there’s a party atmosphere. Great to hear songs like Dirty Dick again. Check out their stuff on Antipop. 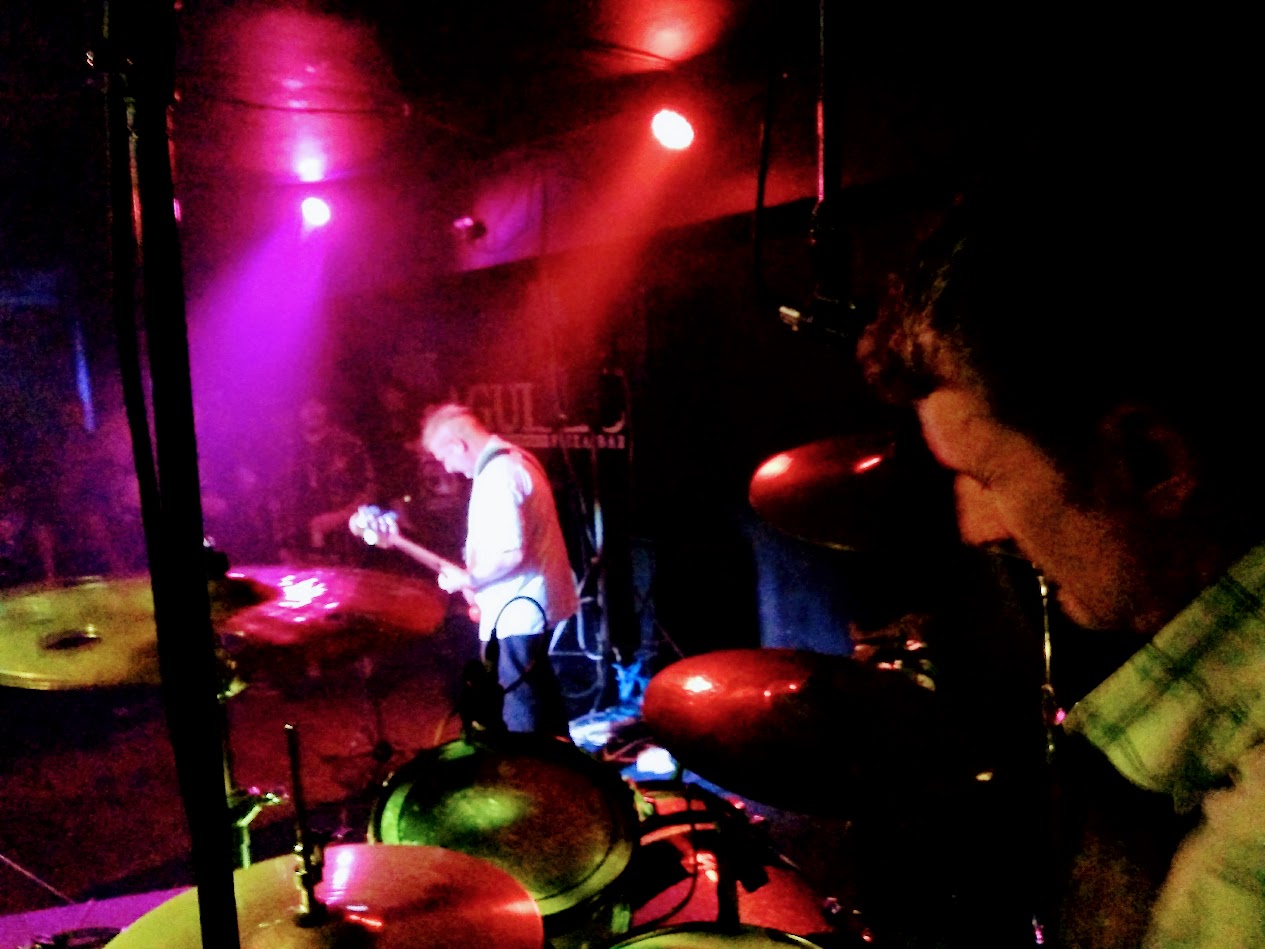 2 Sick Monkeys are quite possibly one of the best live bands in the world… I kid you not. For a two-piece (just drums and bass) they make such a glorious sound. All eyes are transfixed on Pete’s incredible ability to play the bass guitar that way, and all hearts are warmed by the band’s humility and passion for life and how we all should live it. I’m mourning their retirement already and will endeavor to catch them again before they do their swansong at the end of 2018 – AND SO MUST YOU!
The quiet and unassuming Fred on drums offers up as much vocals as Pete and their telepathic link ensures we’re given a brilliant performance. 2 Sick Monkeys will free the shit out of you… Check ’em out here.