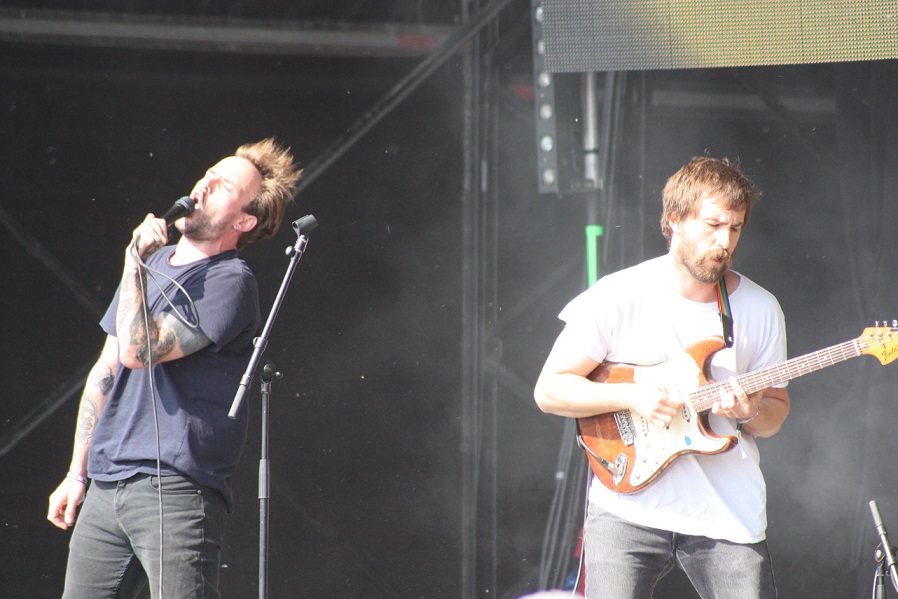 Friday becomes Saturday with an overnight thunderstorm (that a lot of people slept through) and my notebook for today is empty… Half hungover – half drunk you just go with the flow, chancing upon bands, perusing the stalls, missing bands you wanted to see, basking in the sun, sheltering from the rain, eating, drinking, dancing and skanking with friends and family, and talking nonsense to complete strangers – that is what Bearded Theory is all about. 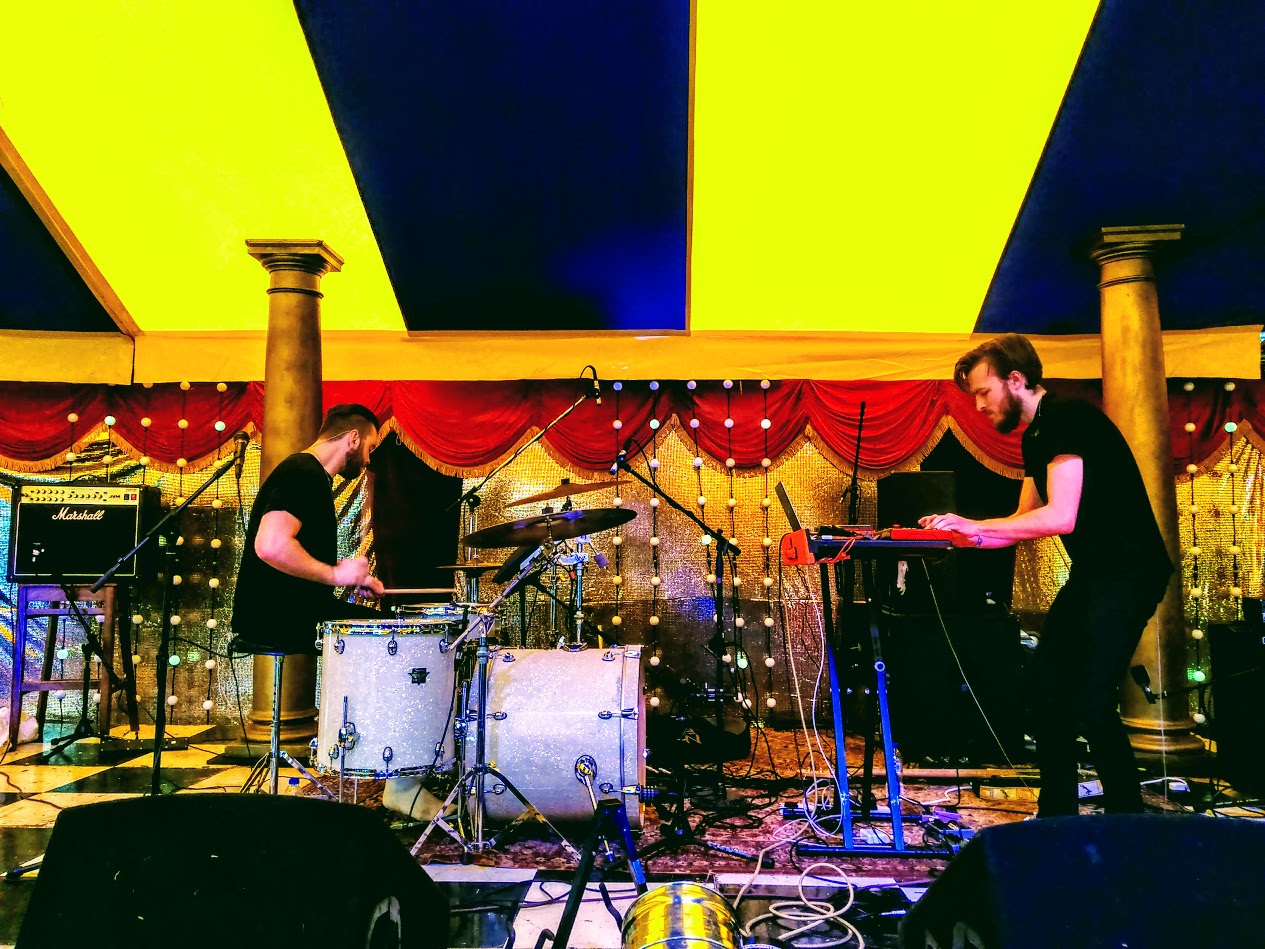 An act called Aurora draw clutches of people toward the Maui Waui Tent. It’s still early, the smell of morning coffee and delirium tremens is strong in the air. Aurora (rubbish name) is/are basically two music students over-indulging their talents upon a smattering of us… Intriguing drum patterns and other oddments keep those present interested enough before moving on when others arrive for the same reason. 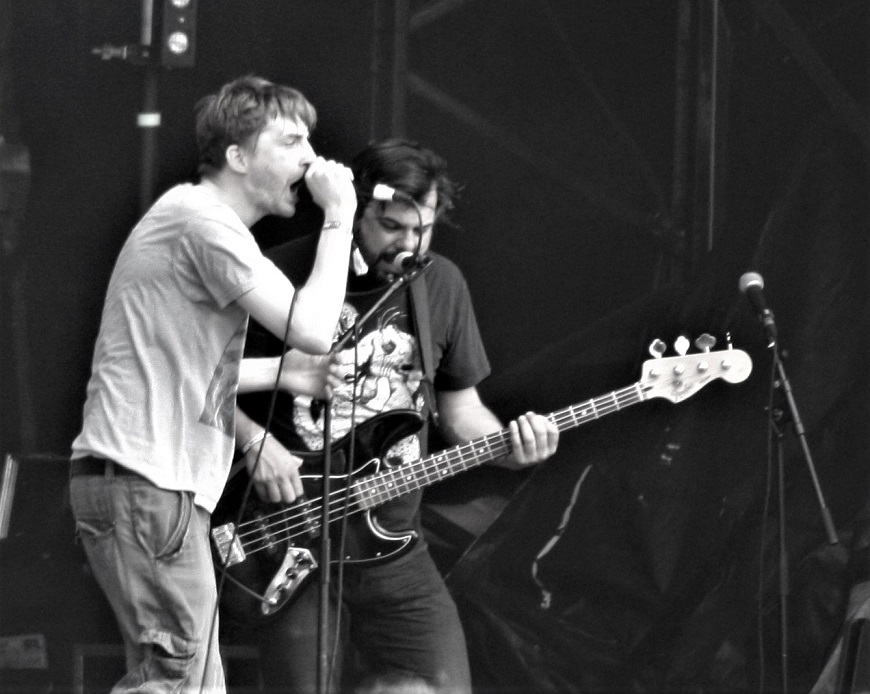 Random Hand take to the Pallet Stage – I had last seen these at the Dudley Arms in Rhyl in 2006 so to witness them here in this setting, is quite a contrast from those grimy days of subculture but, like their album says, ‘Seething Is Believing.’  This Keighley band smash it out punk-ska style and are bounding with energy and tales of intervention. That distinctive trombone sound clashing with loud guitars came rushing back to me and everything was ace. 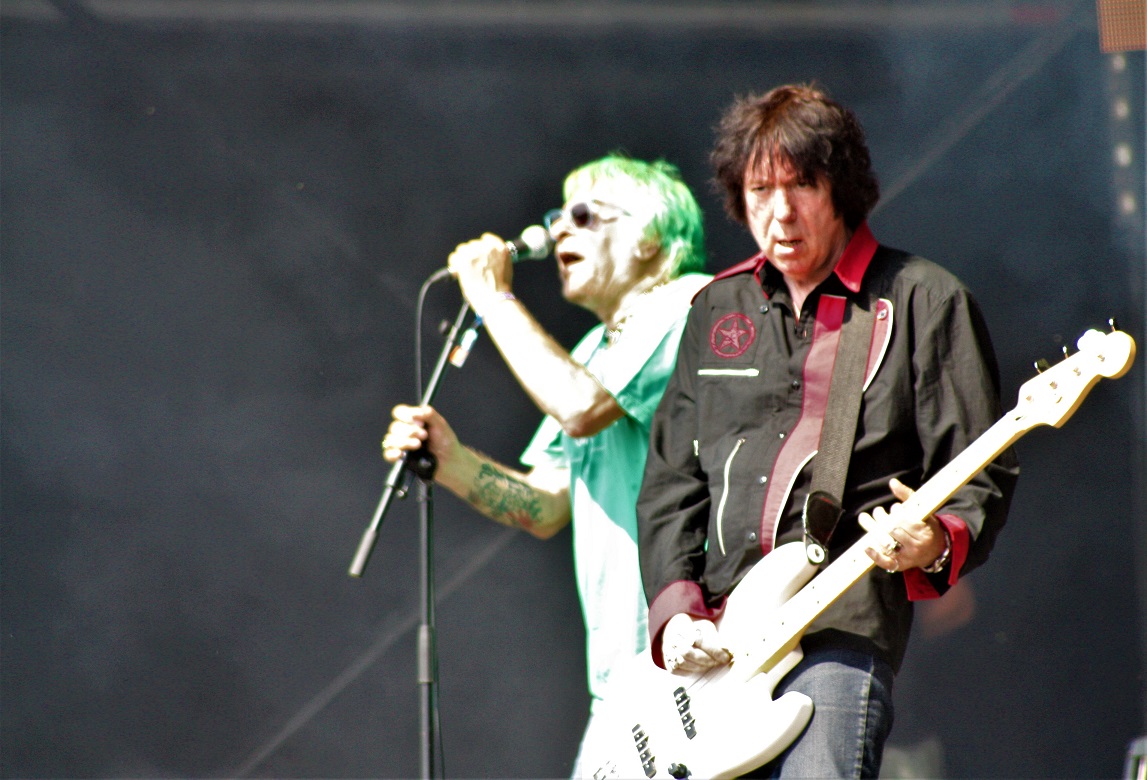 I saw Jamie Oliver, the drummer with UK Subs frantically running to the main entrance looking for relatives who were trying to get in before he was due on stage (in 15mins) – not sure if he found them but, he (as always) was on time, and like a human metronome he played impeccably. Jamie once stood in on drums for my old band (Braxton Hicks) and played a set having learnt the songs less than an hour earlier… (we were shit, he was incredible). We supported the UK Subs that night and I have a long association with the band, from watching them on Top Of The Pops in their late 70s /early 80s heydays, to having them sleeping on my living-room floor when I promoted a gig in Colwyn Bay, to gatecrashing their gigs with my other old band (4Q), to seeing them live so many times.
Today is Charlie Harper’s birthday. He’s 74, and was born a rocker and he’ll die rocker (having outlived us all) and is living proof that God gave rock’n’roll to us all. There’s a burning sun shining on the stage and our punk rock temples are an inferno as we’re treated to a ‘festival set.’ It’s filled with beauties such as Warhead, Down On The Farm, Teenage, Tomorrows Girls and Stranglehold. It’s timeless and that’s all that matters. 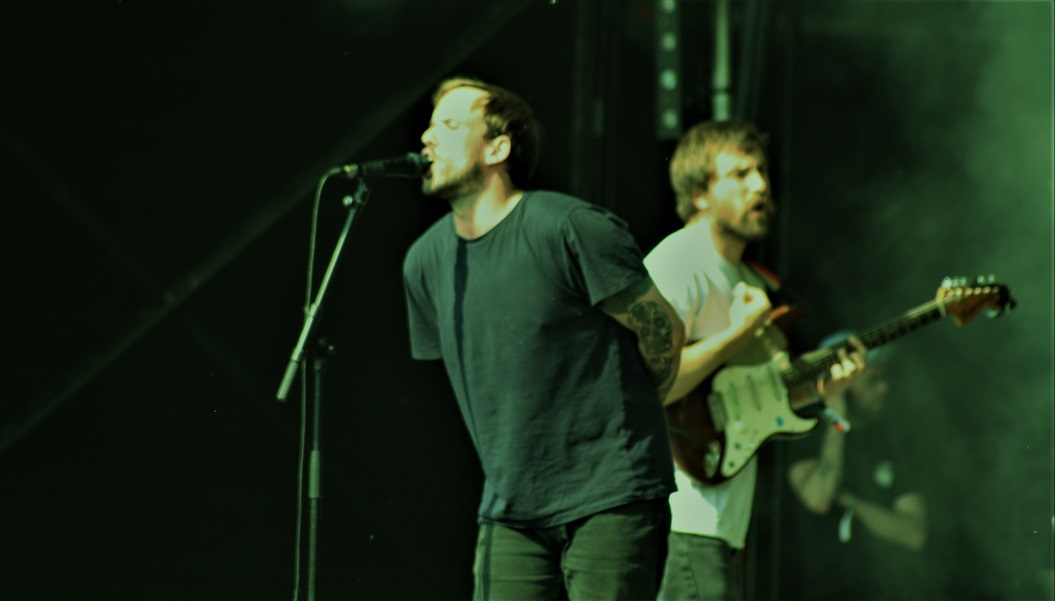 From their humble beginnings as a dirty Bristol punk band about six years ago, Idles have (this year particularly) exploded onto the almost mainstream. Last years’ debut album ‘Brutalism’ is just that – as is their inflammatory live set. I did question the fact they’re on the main stage in daylight, as I saw Cockney Rejects here a couple of years ago and their power (and the glory) was somewhat diluted by the size and sunlight. Nonesuch problem for Idles… As with all the stages at Bearded Theory, the sound was excellent and Idles ramped it up in both noise and performance. The lyrical social commentary is rasped by the dissentious Joe Talbot and backed by a firebrand band hellbent on sending you right there (Hell). They are dubbed as one of the most exciting British bands of our time… They could also be the most dangerous if they choose to… 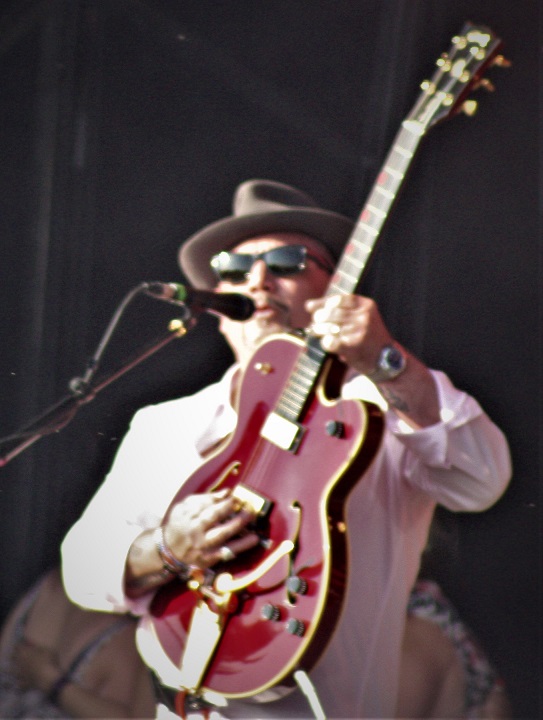 After all that exertion it’s time to chill down a little and enjoy Fun Lovin’ Criminals – did you know Huey Morgan is from New York? An FLC album (any of their six) is something I quite often stick on at home, or in the car to simply switch off from reality and enjoy. Like Huey’s 6Music show, I dig the groove and I dig the vibe… Just as we did this late afternoon. Drummer, Uncle Frank (from Leicester) takes some humorous attention away from the mainman and everything is cool while we munch on Scooby Snacks to the Kings of New York. 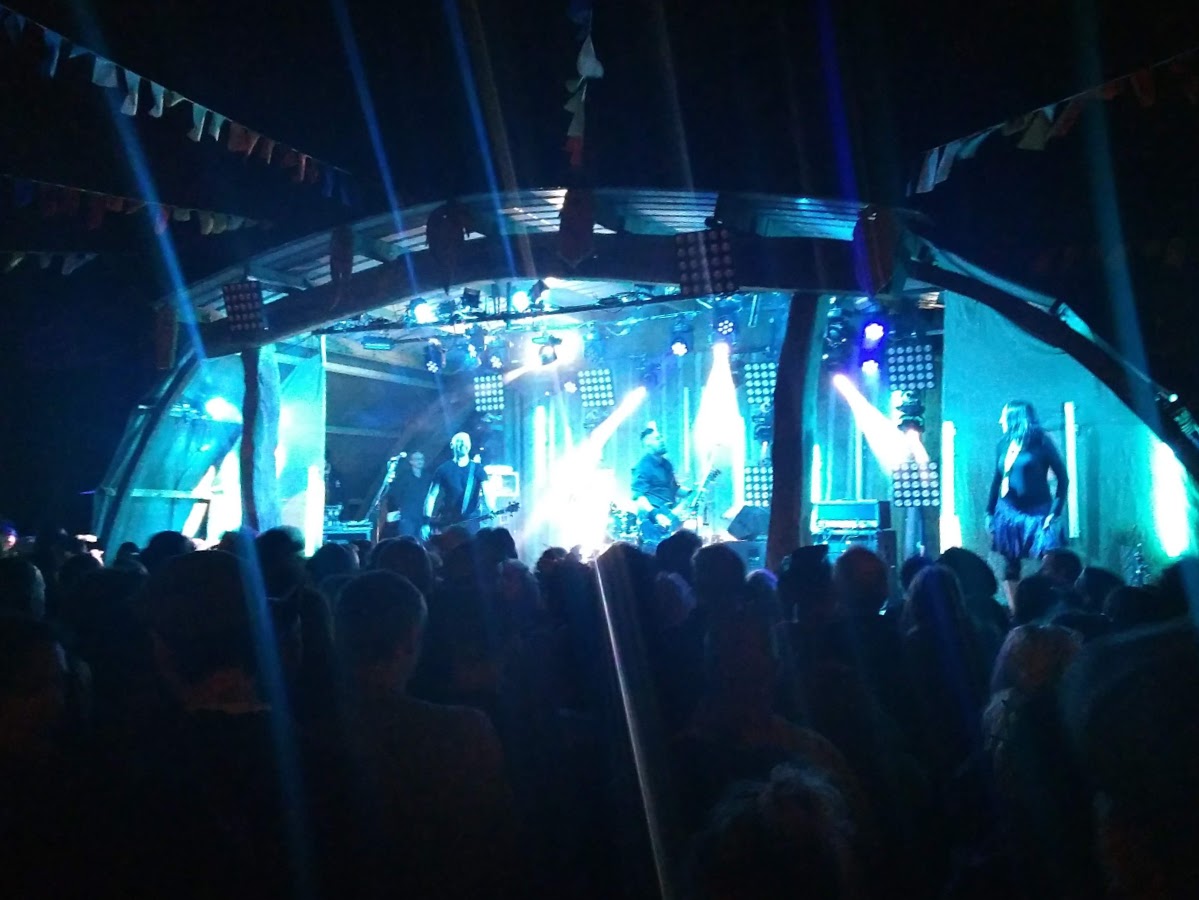 I saw Therapy? at Download Festival a few years ago… I wasn’t really taken by them at the time, and when they were grinding their teeth all over the scene in the early 90s I was trying to make my own mark with my own band (Sons Of Selina). So I kind of missed out on all the fun. Tonight however was very different… It’s dark and it’s on the Woodland Stage (which is dark anyway). Robert Plant is on The Pallet Stage, hence why this is so packed, and from the word Go, Therapy? are well up for it, as was the sign language interpreter (nice touch). Andy Cairns plays and sings like he has a point to prove and there’s a great buzz coming from the stage which is conveying into the audience. It’s almost a punk party atmosphere and that point was well and truly proven. Great fun, great gig.

Just realised, I’ve name-checked three of my old bands in one review… I now play in Spam Javelin – hopefully see you from the stage at BT19…!