BLOG – Emissaries of Syn – To Russia With Love 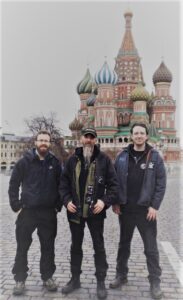 Once upon a time a Welshman met a Russian on a battleground in the Czech Republic. All was well, and as he admitted defeat and was drunk under the table he managed to pass over a copy of an Emissaries Of Syn CD as a token of international fraternity before tripping over the mortal coil, breaking his tent in the process.

A year later the annual international symposium of grind party that is Obscene Extreme Festival reconvened and fortuitous friendships were reformed. Our comrade Ivan had liked the stuff and said come and play in Russia. What? You do realise we are a tinpot band from North Wales? No, no, come. I will sort everything. 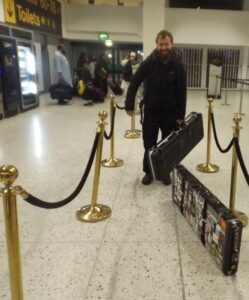 April seemed an appropriate time, with the expected temperature range somewhere between -25 and plus 20. An official invitation and visa application is required including a trip to the consulate in Manchester to get everything stamped and your fingerprints taken but it seemed a lot less complex than the US process I went through last year (No questions on participation in genocide or prostitution. Phew!). We were paying for our flights so the cheapest option was not exactly convenient. We gathered at my place at midnight on the Thursday to commence drinking and organise the logistics of dumping spare pants for the sake of taking more merch. We were also shipping 40 tapes of Children’s bible stories that was going to be taped over by a Russian grind label, so got our stories straight on that….
Manchester by 4 and meet up with our manager/merch man/masseur Saw in the bar, fly at 6 and then a lengthy stopover in Frankfurt where coincidentally they have fine German beer. Off to new found territories next as we flew over Poland and the Baltic States (still ice on the sea) on a clear sunny day, our manager ensuring we were allowed simultaneous free beer and wine to lubricate the passage.

Before long we were seeing the expanses of the steppes and the forests, some snow still surviving, and we descended into a bright St. Petersberg. A very slow process getting through customs, maybe more targeted at other ethnicities of the Federation than Rasputin lookalikes, but then we meet up with Ivan and we are in safe hands. Perhaps, until we split into two taxis though, and experience a slightly different level of highway code (make it up as you go along). We do get to marvel at the sheer expanse of the city though, colossal housing blocks going on and on, all very greyed and dirty as they emerge from the permafrost/slush season. But apparently the Muscovians claim the place is dreary anyway, with it raining a lot in this north western coastal region, maybe it’s twinned with Manchester. We eventually reach the older/ornate town and found our hostel very close to the centre but tucked away via some back courtyard.

Early evening and the sun is setting so we go get fed and watered at a traditional eatery, quality food and cheap, before we hook up with our friends who are also over and an increasingly large group of locals forming our welcoming committee. We hit Rock Pub and wander the streets on the recommendation of seeing the city lit up at night, which is indeed impressive. The extravagance of the old home of the Tsar’s is obvious as is the extent that the contrast could trigger a revolution. It’s not even that cold but we eventually still choose to shelter in a very relaxed bar ‘til 4am before eventually catching up with our sleep/Gwyn’s snoring.

More brunch’n’beers commences the Friday and we have to abandon our hostel and temporarily relocate our gear to a friend’s house while awaiting the club’s opening. We do this via the Metro that looks very familiar given recent events but apart from metal detectors and the comically slowly pacing security patrols it is business as usual. Their take on it is pretty much how we would rationally look at the Westminster incident, one crazy guy does not merit living in fear. Now we can go full tourist and at least see the sights of the outside of the Hermitage/Winter Palace and other areas before ending up in an excellent bar/restaurant. Suitably fortified we recover our stuff and head to the club. Turns out the bands are only allowed in around the time everyone else is so supermarkets and street drinking ensue.

When we get into Griboedov Club we are not in the more jazz orientated upstairs but rather the “Bunker” in the basement. It’s an excellent loud set up and stage though, and soon we are underway with music. First, Sram, the three members (including Ivan on vocals) being split between here and Moscow but still managing to combine to become a heavy force of grind power. They’ve had lots of splits out but live they are even more impressive, obviously to a respectable level to attract interest from European festivals. Forest Hum I really enjoyed checking before we came over, an excellently produced harsh and fast Nasum style grind, they tear the place up but still have interesting mixes in structure and atmospherics. We are up next (bearing in mind our subsequent travel arrangements), the reaction is amazing/crazy, pits and surfing, the heart is full of emotion. Minor fuck-ups from the excitement but the sound is solid, though my voice is giving out at the end. It’s not massively busy but everyone there seems to be going for it, they have their scene and they support it actively. I’m so carried away I encourage folks to help themselves to our merch but who cares, we are grateful. We still have time to enjoy Camphora Monobromata, who have an excellent bouncing rhythm to their heavy and raw mince-core, and certainly whip up a reaction from the crowd who obviously hold them in high regard. Their “Suffering among hostile walls” is a top notch subsequent listen.

We say our farewells swiftly and escape to the nearby train station for the night train to Moscow! An experience as well, in the dormitory bunk carriages where we can still sneak a nightcap beer but have to moderate our party come down to not attract the attention of the guard. Sleep comes easy as we are rocked away, awake Saturday morning to broken toilets and to still have time to see endless forests, more remnant snow then the sprawling blocks of the extended urban area that makes it about twice as big as London – incomprehensible mass. Where Napoleon and Hitler have failed, the Welsh succeed and stroll into the city. We Metro to our next hostel but are too early to book in so drop gear and instead go for breakfast blinys and a McDonalds toilets relay race (Gwyn dropped the “baton” on the last leg).

Once we’d taken a weight off we meet up with more local tour guides and due to the extensive refurbishment works underway in the centre (elections upcoming) are diverted via a wander down the side of a motorway before swinging back up to Red Square. Marvellous, impressive, beautiful place, remarkably clean buildings, apparently many streets are shut down and pedestrianised in the summer – a city that has space to breathe. Lenin isn’t receiving visitors today and Putin was last seen riding off on a bear, so we circle round a small Communist Party rally that has more police presence than attendees and opposite the old KGB headquarters find the ace Razvedka Bar. With gold AK47’s as door handles we descend into a nest of intrigue of the spy themed establishment, with more genuine weaponry on the walls than you can shake a SAM 7 at. While watching detailed documentaries on the mechanics and effectiveness of small arms we are also treated to a whole tray of “Grandpa’s (savoury) and Grandma’s (sweet) Tinctures” which are not medicinal at all, (the garlic one was not popular), but definitely hard alcohol enough to loosen the tongue. As it’s a rainy afternoon we elect to spend the time eating and drinking with again more and more new friends arriving to join the gathering. They are a vibrant and intelligent bunch, their English is plenty good enough, get the impression that as the yoke of the state has only come off in recent years that there is a great exuberance to travel and learn and, well, party.

We eventually drag ourselves away with a ten grand bill, walk back to the hostel to freshen up and get the gear, then walk on again through tree lined boulevards to our destination for tonight, Dich Bar. Down to the basement, it even has a vinyl shop in the foyer. It’s spread out over various rooms but as we aren’t bothered about a sound check (ah… hindsight…) we again head out under advice to a supermarket across the river to then indulge in a car park drinking party. This is completely familiar to the hangouts in places like Leeds and it is great to feel that social connection while we also indulge homemade spirits. Then we return to business down below, catching a bit of Bad Boner, which is a first outing for a new side project of guys in other bands here. All 8 minutes of it, where soundcheck and grind explosion are hard to distinguish! Next is Vyrodok, a more serious and hardcore grind proposition, lots of one minute songs but with a really punchy sound. Finally and definitely the pick of the bunch Head Brain Blockade, who are as visceral and sharp as current Napalm Death, and listening to their album afterwards think they are absolute quality that should be reaching a wider audience. Could be a little daunted in such impressive and fierce company but the reaction is the same for us at the end, even if we are more hardcore punk/thrash orientated we can still blast and grind and there is another genuinely pleasing maelstrom of a response. Getting the mike knocked into my teeth I take with a smile in these circumstances. There’s some serious tuning issues at the end but we are battering the set to its conclusion and they still want more. We have our host Ivan from Sram join us to guest on vocals for our finale “Another End of the World” and this is another highlight. We teach the Russians “Iechyd Da” but can only say “Spassiba” from the heart on the welcome we have had, amazing stuff.

We retire with all our gear to a 24 hour karaoke restaurant bar where a huge table of us share food, space rocket sized beer kegs on the table, and bottles of vodka for £3 direct from the bar. Lo and behold it is 4am again and we go to crash, but not before having a party involving the exclusive editions of Snickers we have never seen in our deprived homeland – rock’n’roll! More breakfast blinys before a taxi back to the airport, where I have my tourist weaponry souvenirs seized but we head back via a stopover in Brussels (Belgian beer is available), and time to reflect that we are visiting places that have been smashed by Wales on the football pitch. Back to the Manchester about 9 on the Sunday evening and then we’re home and recovering. A great adventure, but also incredibly stimulating for the band, this is the kind of thing that satisfies us. I can only recommend visits over there to everyone too, it’s not and will not be the Evil Empire some people will have you believe, it is the grind Mother!