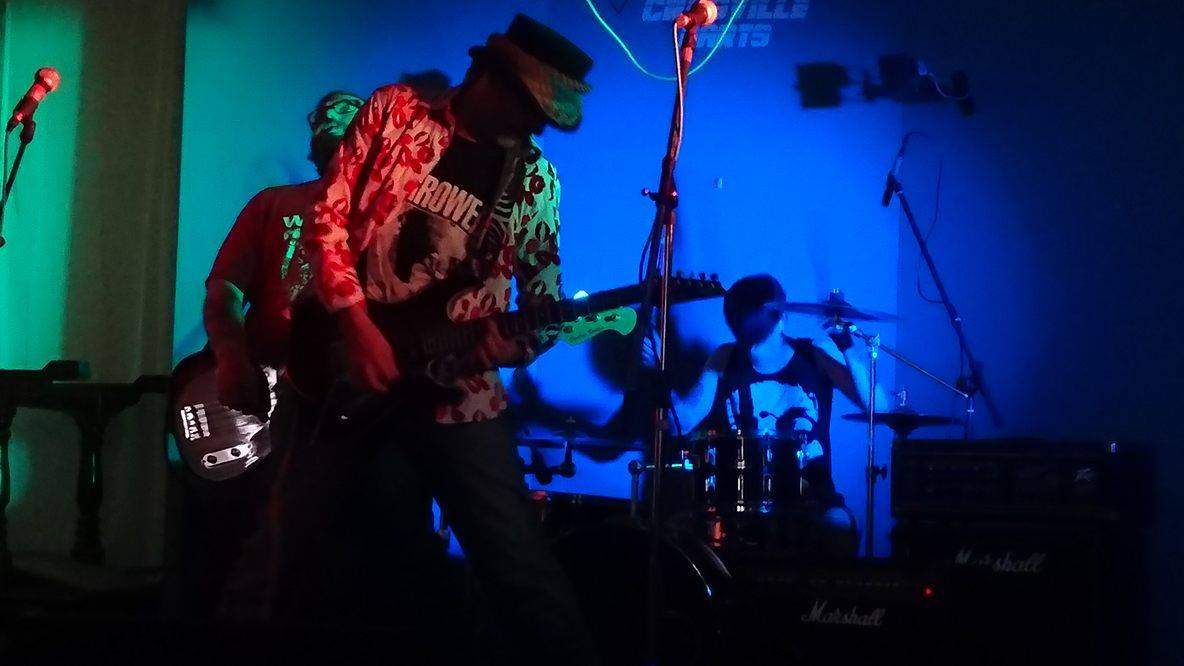 Walking into the Crosville Club in Bangor, you’re greeted by a sign which reads:
NEED GLASSES?
GO TO SPECSAVERS
DON’T STEAL OURS!

This is the kind of sarcasm I can get behind. Thursday, April 8th sees 5 bands take to the Crosville’s stage to ply their musical trade in front of a group of people who have braved the recent mad weather to be attacked by mad music.

Nights like these are always special. There’s an extra shock of electricity in the air, which is further added to by the fact that the night’s co-headliners are releasing a split 7- inch vinyl at this event. Vinyl’s back, baby, and Emissaries of Syn and Spam Javelin have joined forces to release one of their very own. Joining them on this packed lineup are Red Than Dead, Maines (who have come in to replace Welsh-Mexican sludgers Los Muchachos who sadly had to pull out due to an unfortunate donkey-feeding accident) and Depraved State. I prepared my ears for an all-out bombardment, got a pint in, and sat down. 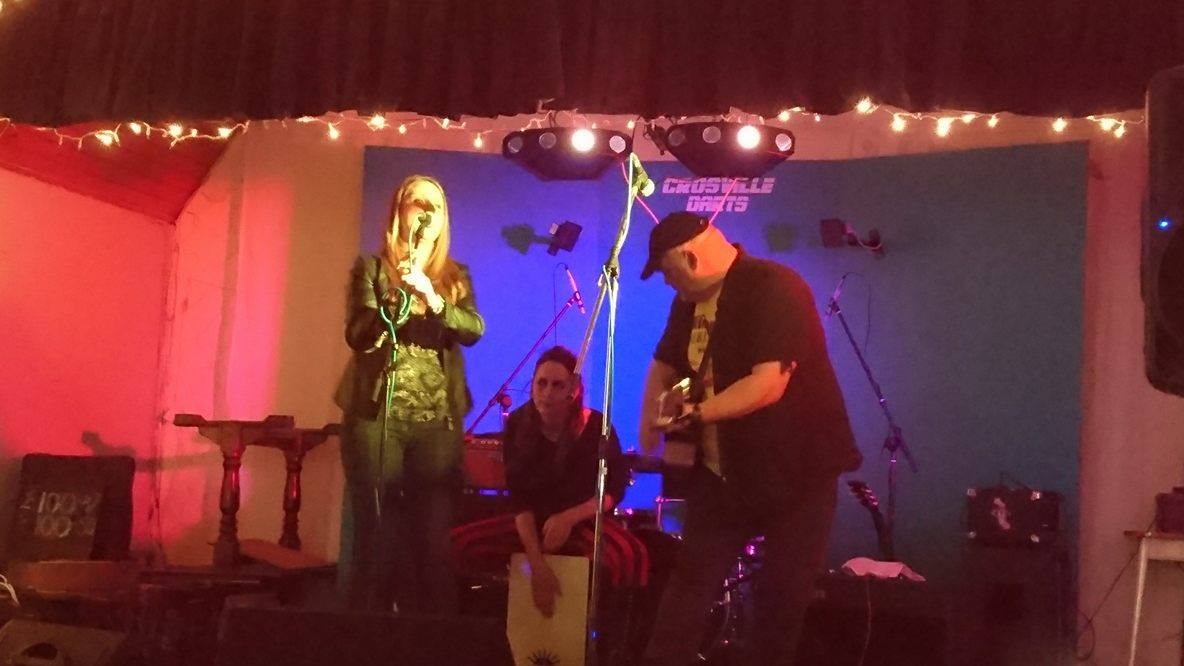 First up were acoustic act Red Than Dead. They started off the evening with a set of political acoustic punk tunes, reminding us all that this country is undoubtedly fucked if we don’t actually try to make an active difference. With the junior doctors striking still in the forefront of everyone’s minds, this statement is becoming more and more like a battle-cry around this tortured land of ours. The music they played was perfect to start off the night, with the barrel-chested lead singer rolling out the lyrics, the lady singer adding an extra oomph to the choruses, and the punky cajon player dutifully slapping out the beat. Although they sang about a very serious subject, Red Than Dead were the lightest band of the evening and, as they finished up, the heaviness descended like a storm front. 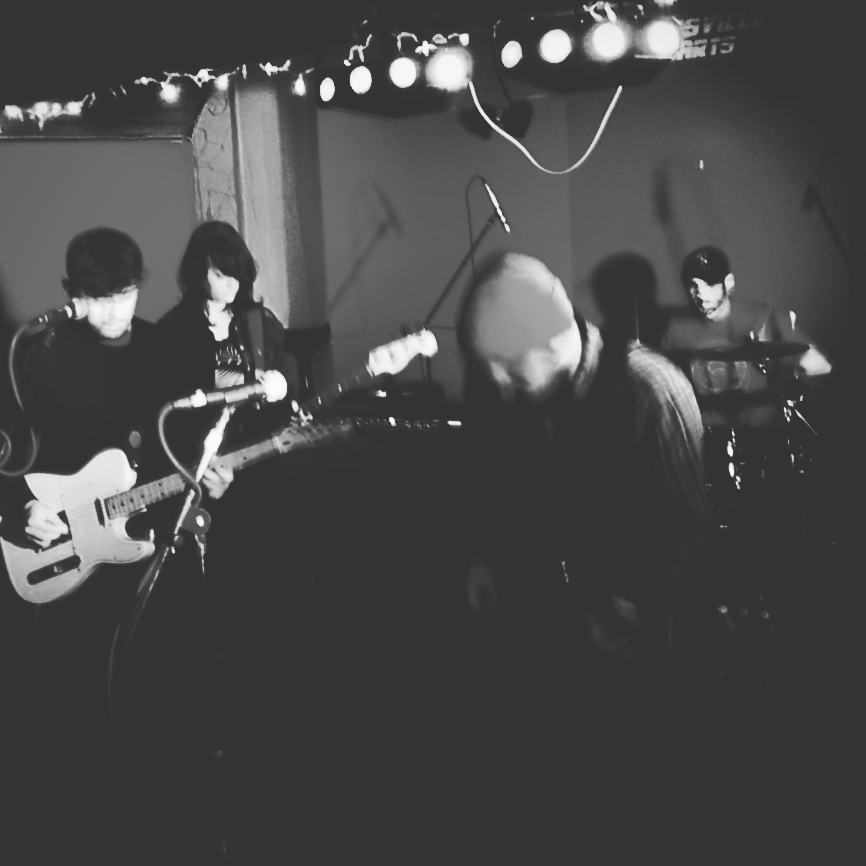 Maines are a four-piece from the Conwy area, and are the band with the most members on the bill. Having recently played the Live Rooms in Chester for link2wales, they are held in high regard by many of the North Wales music scene, and with good reason too.
Their music has great melodies, great riffs, and songs that are a catchy blend of metal and indie. Think early Bloc Party jamming with System of a Down and that’s the vibe I got from them. Very noisy, very gifted, these people are just starting to flex their musical muscles, and I’m sure they’re going to be heavyweights in the scene soon. 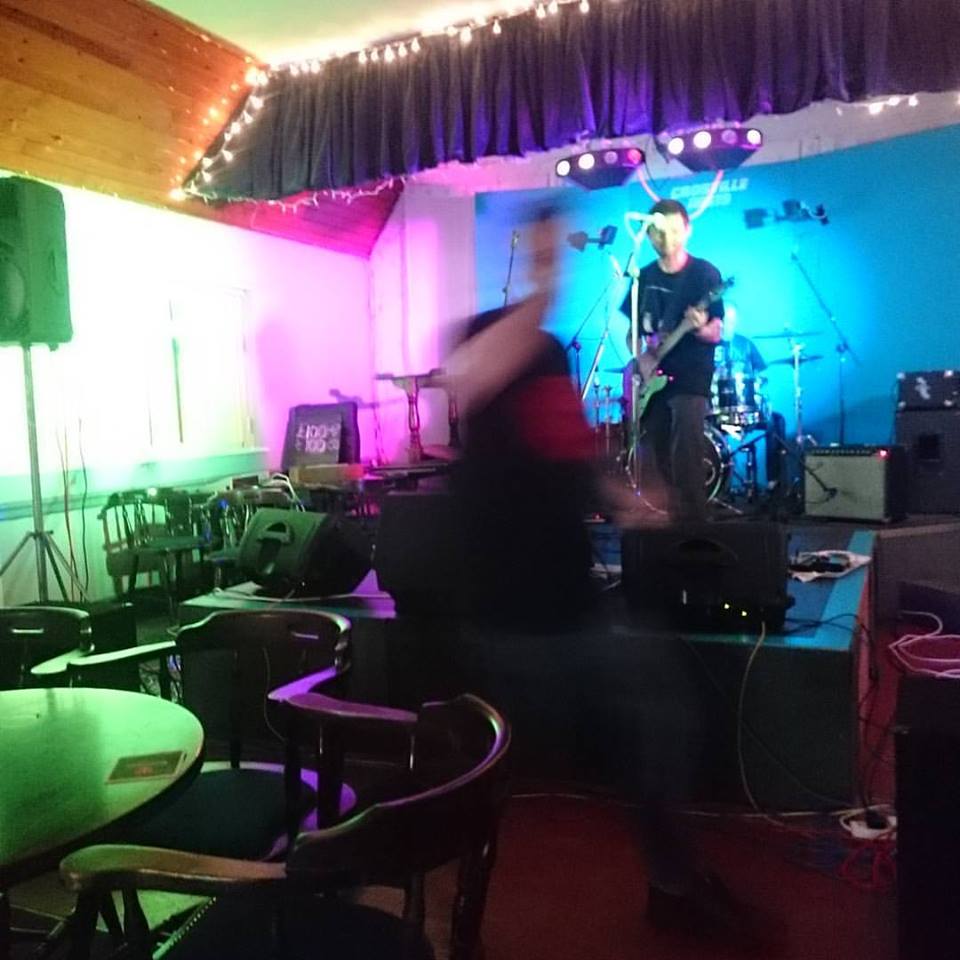 The next two bands have one thing in common: they’re both missing a member. Depraved State are here without their bassist, although their guitarist sounded so goddamn chest-crushingly heavy the addition of a bassist would have probably caused skin to split open. Seriously. These guys are that heavy. If ever you’ve heard of Californian hardcore band Nails, imagine those guys having been brought up in Rhyl and you’ve got Depraved State. They are as hardcore as a bare-knuckle fight on a boat in international waters, and just as dangerous. The lead singer could not keep still for the life of him, jumping on chairs and running around with a zealot’s passion. Unforgettable, eardrum-bursting stuff. 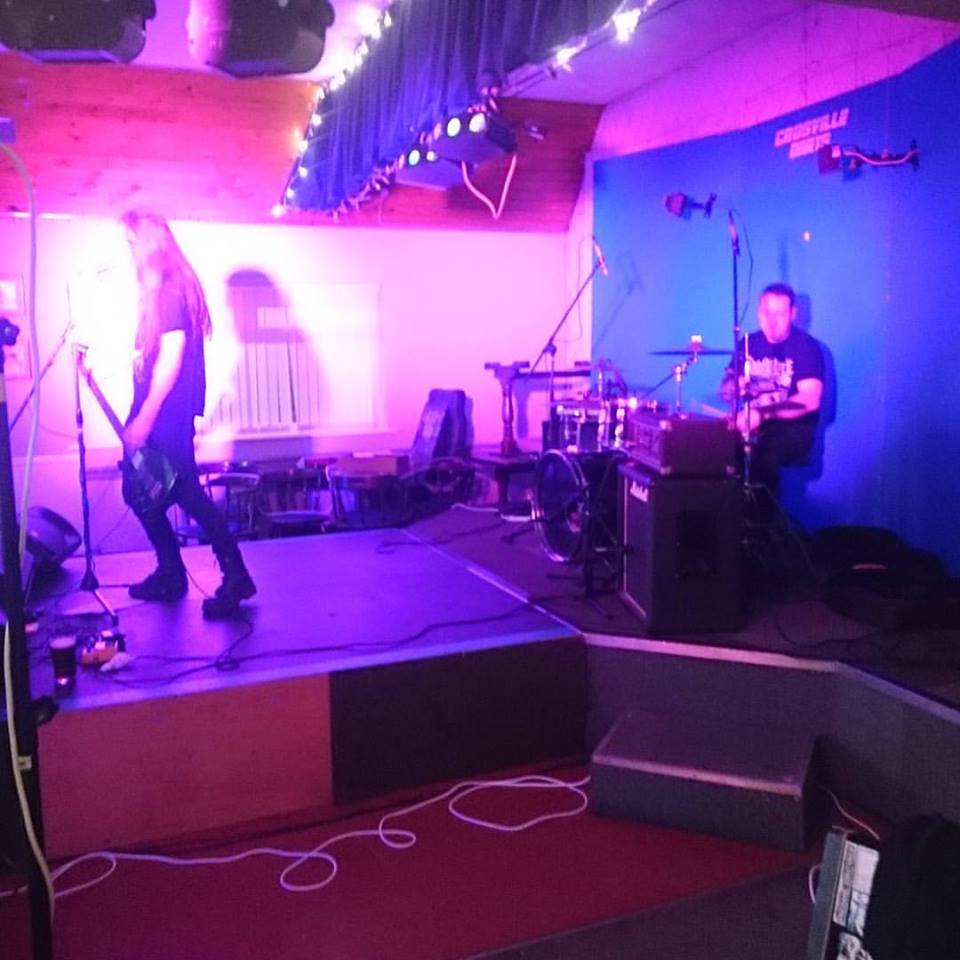 Now we get on to the latter band with a member missing. Bassist Mark informs us that Emissaries of Syn guitarist Matt is sadly unable to attend this event, which is a shame, but fair play to the other members for carrying on despite being a man down. Firstly, if Mark had his bass guitar any lower down his body, he’d fall over trying to strum that thing. He walks a fine line between ultra-badassery and fall-on- assery, but he keeps it on the former side and makes their set formidable as a result. I did enjoy their song entitled ‘The Only Way is Ethics’, not merely because I’m a sucker for a good pun, but also because it was so loud I felt my pint glass start to shake off my table. As a two-piece, Emissaries of Syn are impressive. When they’re at full strength, I have no doubt they rock a venue with an earthquake’s force. 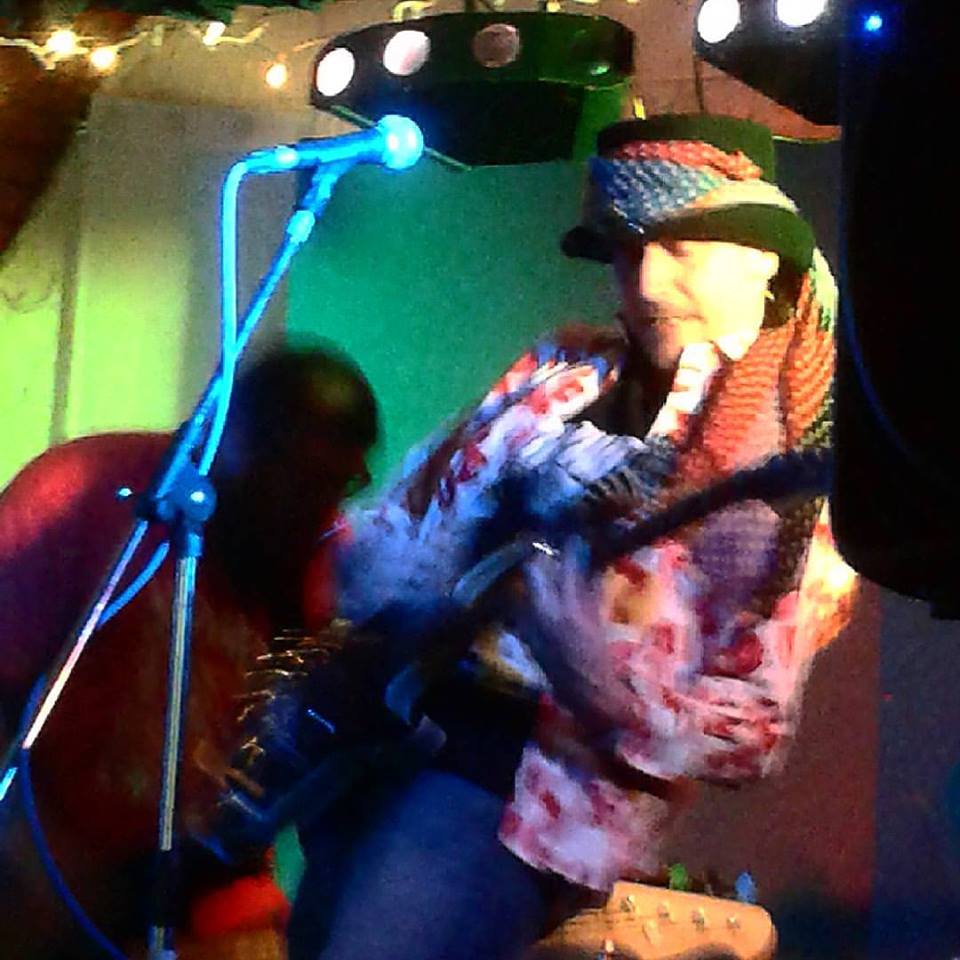 Last, but not least, we have Spam Javelin rounding up the night. As punk as plaid pants, they roar through their set with a confidence and swagger that perks every member of the audience up. With bassist Steve Brute dedicating ‘Ghetto Scum’ to his child’s awful headteacher, his anger adds a little extra energy to the night. To his left, we have Neil Crud on guitar, and if you don’t know him by now, then you should educate yourselves. This night find him donning a be-scarved top hat and lurid shirt, in what is no doubt a heartwarming tribute to his idol Noddy Holder. Behind them and fairly kicking the ever-loving shit out of that poor drumkit (I did feel for that kit, it went through such a mauling this night) is Gwion Griffiths, a living avatar of talent and anger. They blast through song after song after raging song, leaving the audience dazed and sonically concussed. When they closed their set with (I think) ‘Boys with Beards’, Steve leapt from the stage, planted his mic stand down like a flag on a beachhead, and proceeded to belt out the words with an anger that could level cities.

Five bands, one night, no entry fee. The Crosville is an awesome place to see live music, and for those of us who did attend this event, we know just how awesome the local scene can be. I picked up a vinyl from Spam Javelin and Emissaries of Syn, and it’s so rewarding to see local bands make these things happen. You guys who didn’t manage to grab some merch should do so ASAP, as there’s a limited amount of these things left, a and you’ll be sorry to have missed out on grabbing something like this.

So to each of these bands that came, saw, and conquered the Crosville, I would like to say ‘thank you’ and ‘fucking hell, my ears are still ringing!’