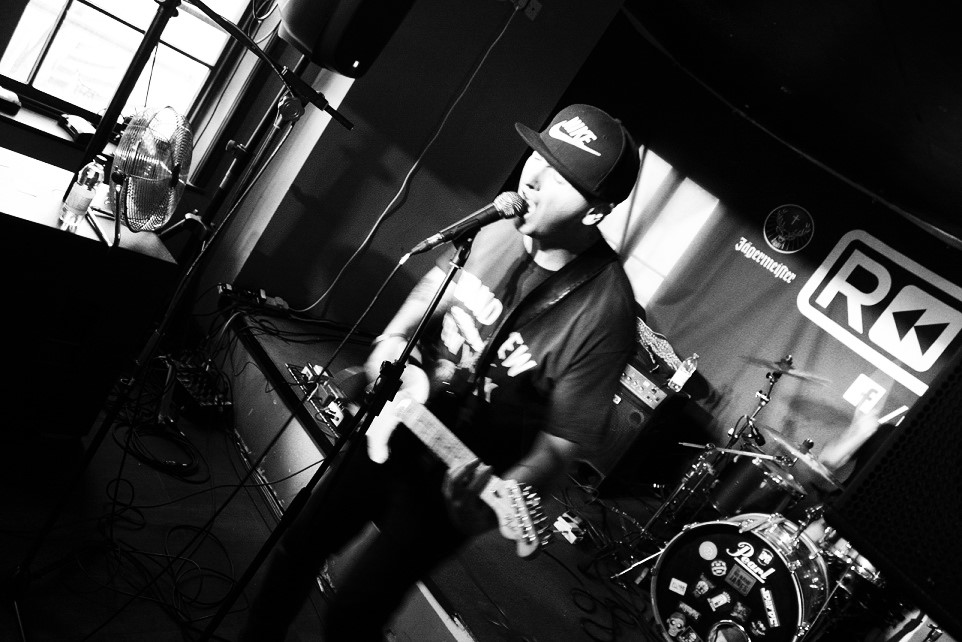 It was a mini-Focus Wales Festival for me this year. Dark forces kept me unavailable until the Saturday, where I found myself playing at Rewind with my horrible band Spam Javelin – we had a ball… but playing a festival also limits your fun as you are at the mercy of the Gods potentially willing people to nick your stuff out of your vehicle. So it was a smash n grab; an in n out and shout Nazi Line Dancers Fuck Off as loud as you can before we headed home. 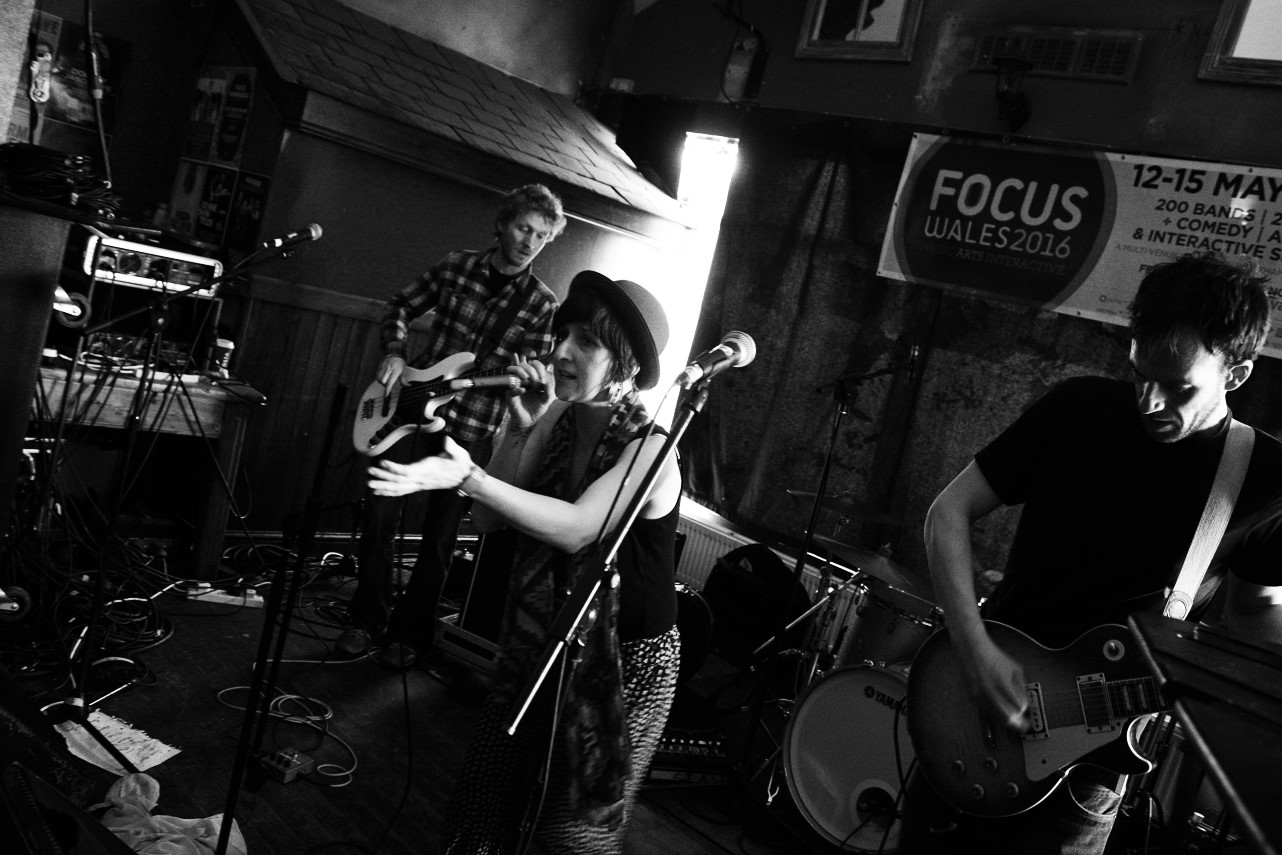 Sunday however left me free to enjoy (and sometimes endure) this extra day bolted onto the end of this great event. I frequently make the mistake of going to festivals and watching bands I know and love, rather than seeking out new music. With only two venues in operation today, time was spent flitting between the two.
I walked in on what I thought was Skin Tight Poncho. The name was familiar and so was the barmy singer; in the form of Stephanie Finegan. It was cool, it was almost a jam, a continuous chill out Hendrixy vibe with the lunacy of Steph as the vocal focal point. I approached the learned Andy Garside for a bit of info on this pretty ace set up…
‘The singer/guitarist has lost his voice so Steph stepped in to improvise while the band jammed.’
Brilliant! They could be onto something here. So I still don’t know what Skin Tight Poncho are like, but I saw a stunning set.

Over on the main stage in Central Station, in perfect time coordinated fashion were Anelog from Denbigh. My homework dug out the fact they were once called Streams a good few years ago (maybe nine), a band that showed great potential, albeit a little naive with their songwriting. Anelog are a different beast altogether and very much a family affair, featuring the three Cattell brothers, their girlfriend and their girlfriend’s sister’s husband’s niece’s cousin. Two guitars, drums and two keyboards must make gigging in a Vauxhall Corsa a very cosy experience, but what you get is relaxed pop with a twist. It’s almost Groove Armada – Fila Brazilia territory and great to have a band on our doorstep capable of entering it. 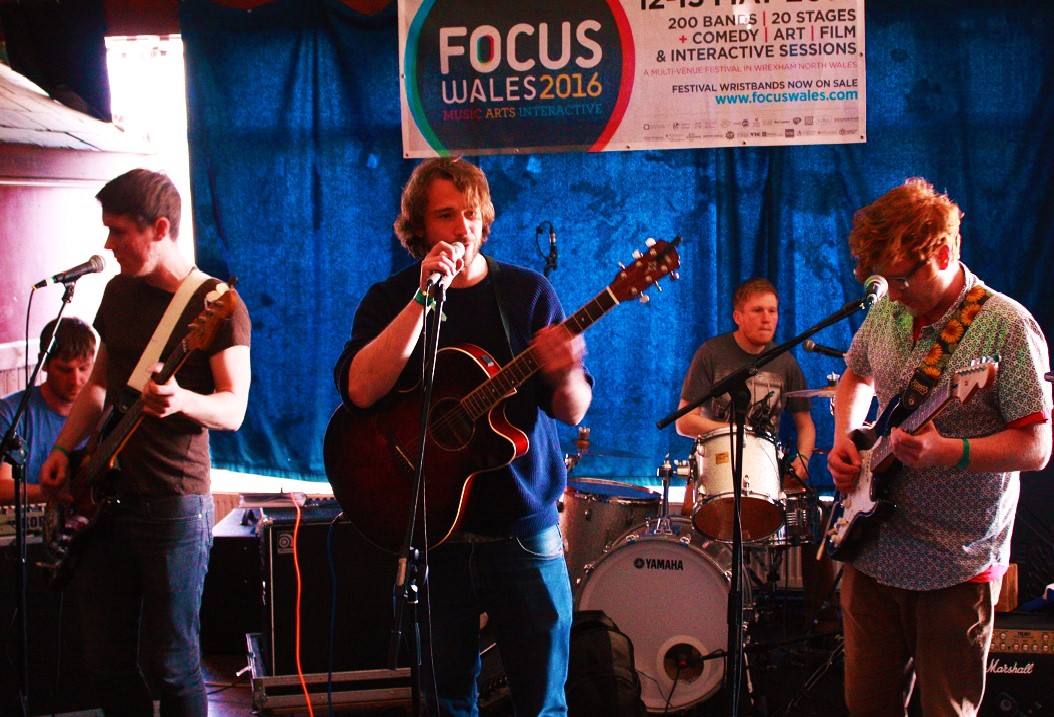 As Anelog finish, Gintis are limbering up on the second stage here at Central Station. This Rhyl band have been trying to retire, but keep getting coaxed back onto the stages of North Wales and the North West, and the area is always the better for it. They’re a band of extremes insomuch they’ll either be shambolic or inspired… They were the latter. Playing mainly (if not all) stuff off their second album, Idiot Guides And Plans they warmed the hearts of those who know the band and won the hearts over of those who didn’t. Great set. 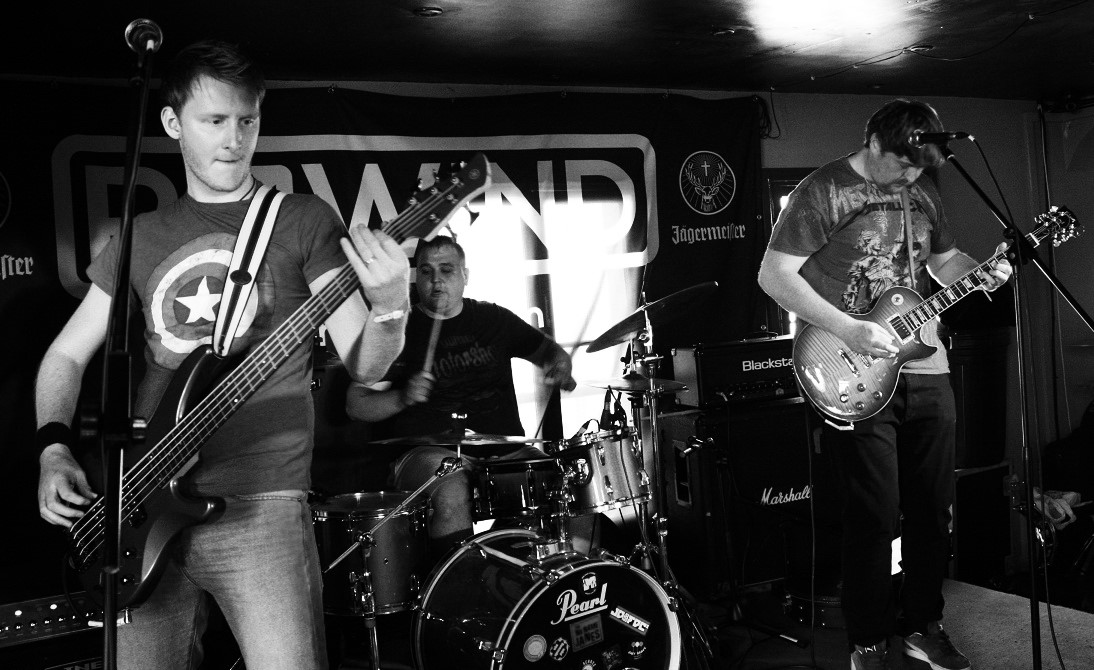 Time to top up my tinnitus… Over at Rewind, Cognito from Wrexham were shredding some fright on proceedings. The Metallica t-shirt gave it away and they were very good at what they do. Loved the song with the Peter Gunn style fast riff in it, as did the fucked guy at the front throwing all the shapes. 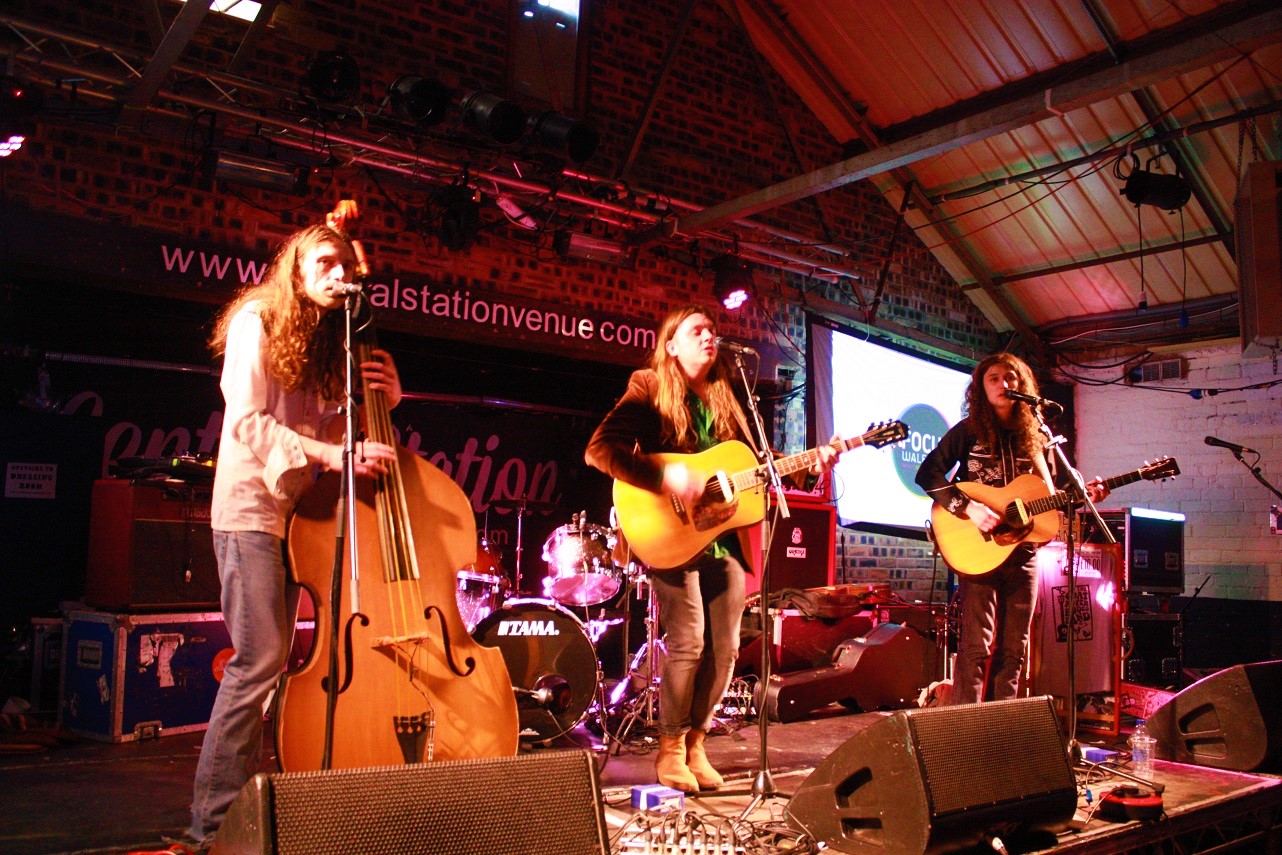 Back at Central Station, there were three horses tied up outside to the rear of the venue, which could only mean The Goat Roper Rodeo Band were in town. These liquor drinking dudes from Prestatyn, Tennessee played a thoroughly enjoyable set with just two acoustic guitars, harmonious dawg-gone voices and a fucking enormous double bass. Excellent chicken lickin’ fun. 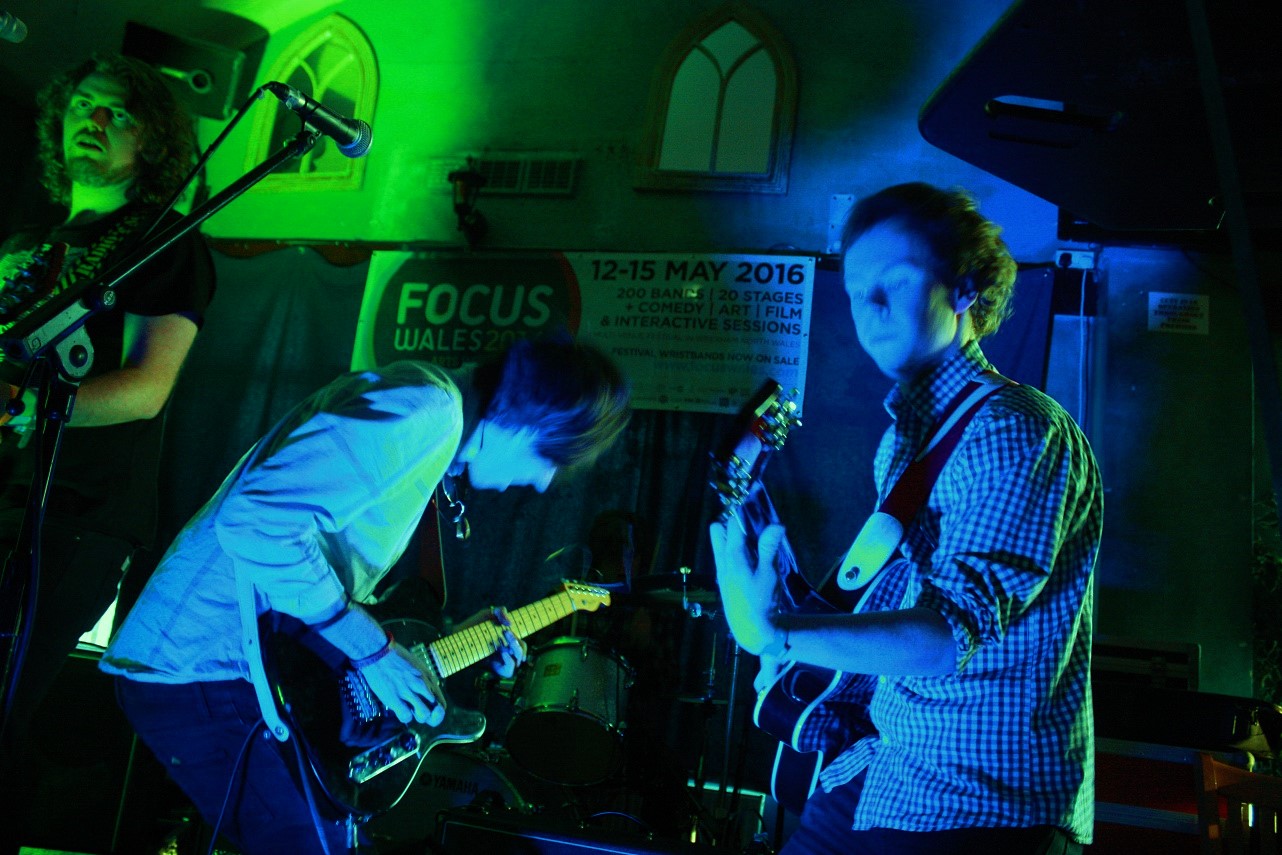 I caught a couple of songs by Seegulls of Chester, making their first foray into Wrexham with their happy go lucky poppy-rock stuff with three guitars. And headed back to Rewind (thankfully the two venues are a street apart). 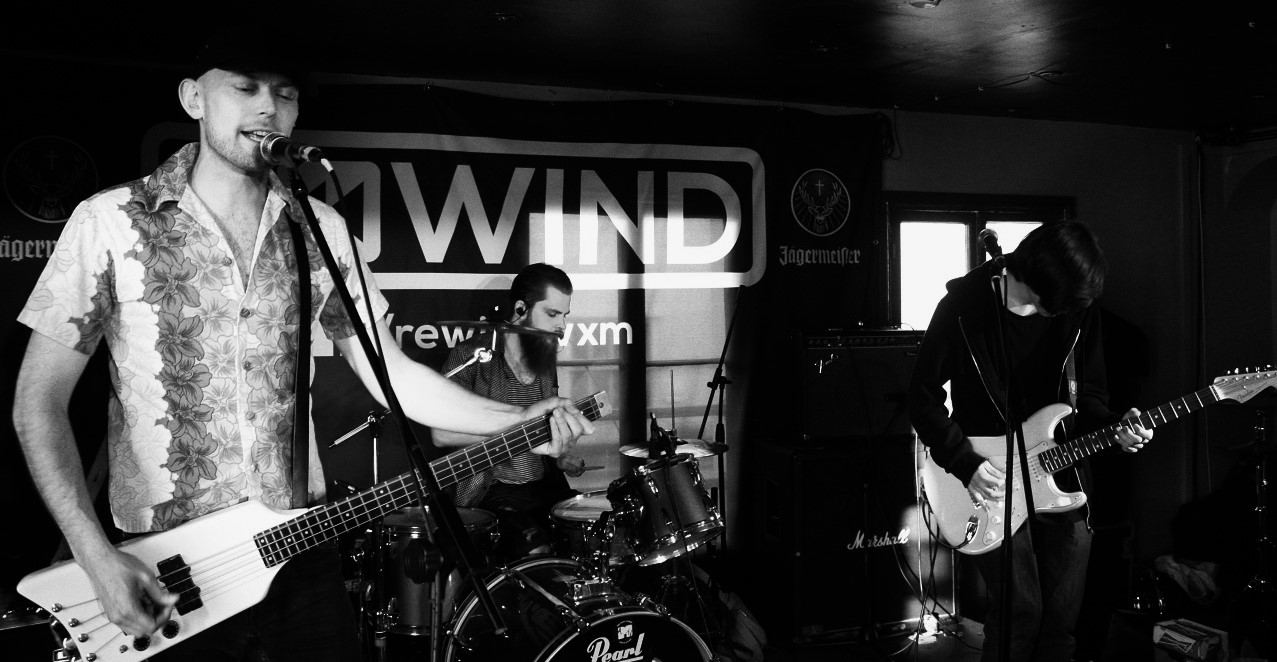 Here, Cardiff’s Totem Terrors made my day. It’s good to discover something different and even during the soundcheck I realised I had chanced upon something pretty damn good. They’re an FX driven up to date Gang Of Four, splashed with some diabetic early Killing Joke drumming and a sprinkling of Throbbing Gristle fisting The Fall.
They’re mainly two minutes songs packed with mentalist parts, from slide bass to screams of ‘What’s in the bag Billy?’ – we don’t know, but every song is an exciting adventure into a world of totem terror.
‘A three course meal for one, a tandem bicycle for one and a funeral for one.’ Much focus on the lyrics while the music sends your head west; like you’ve been bitten by a snake and you’re off your tits on venom. Ace.

A quick saunter back to a now packed out Central Station where all the luvvies are lapping up the dulcet tones of local heroes Camera. A band that seemed to have passed me by, but on evidence of the couple of songs I saw, it’s easy to see why they were so popular and why all the members have since sprung up in so many excellent local bands. I left them all to be mesmerised by the Magic Numbers and headed back to my final appointment at Rewind. 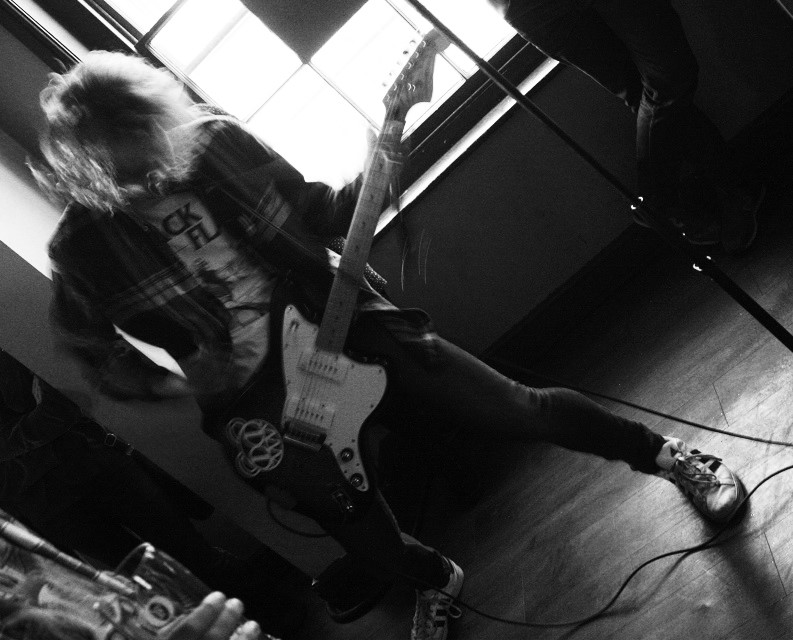 Oswestry’s Modern Tribes were already in the throes of dismantling the stage, the venue and all those within it when I arrived. Playing very loud, American style hardcore is the name of this excellent game as the band took it upon themselves to perform in the audience, on the audience, under the audience. It is loud and shouty, and yet you do sense there is a hint of melody in there trying to get out until they slam the door shut.
It’s brilliant entertainment, and like Totem Terrors, Modern Tribes had me dipping in my pocket to purchase their releases.