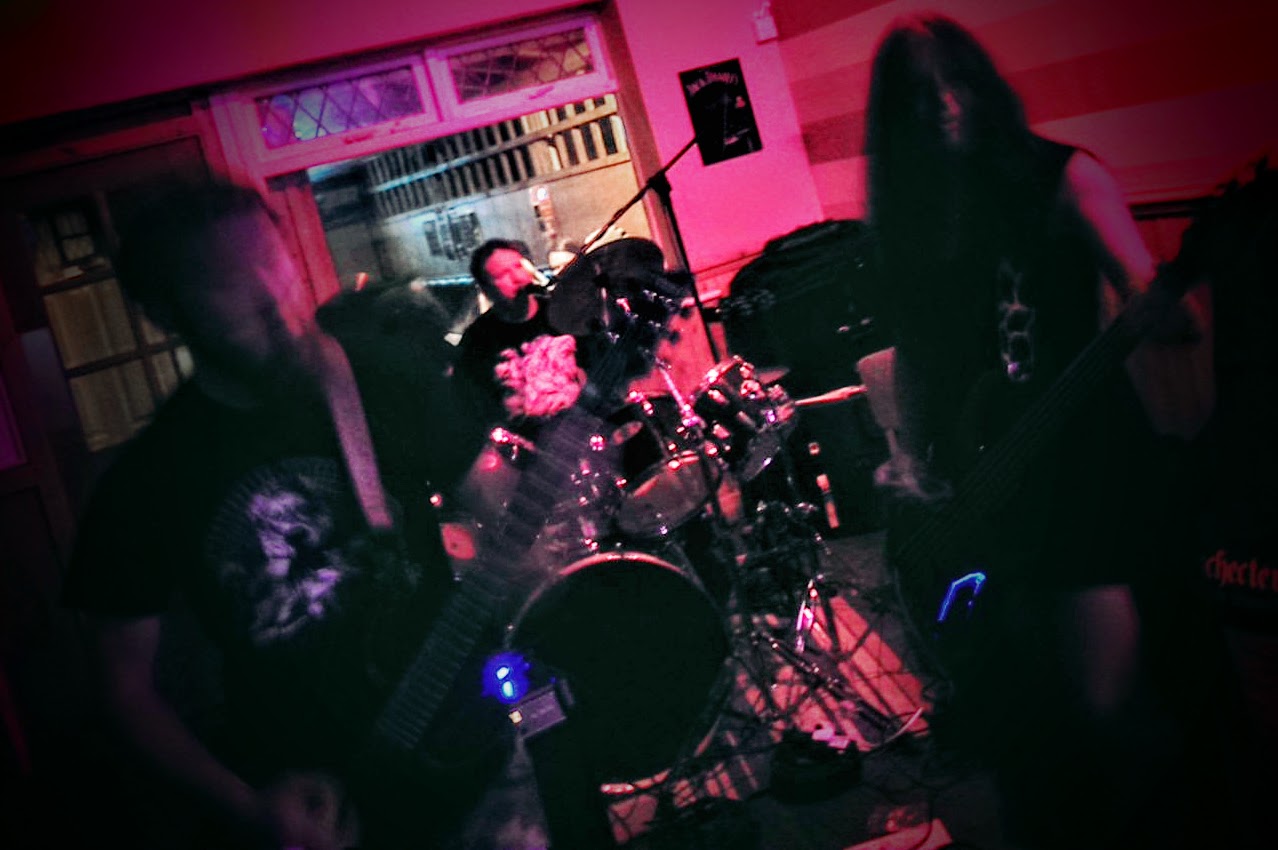 ‘Download and Leeds Festivals always kill our crowds.’ Promoter Steve Rastin muttered surveying the spaces in between people on this Thursday night in Rhyl. It’s good in a way, as he at least knows his type of audience, and the average age of them (ie; young).
Those of us present were here to pay homage to the industrial psuedo goth and just plain odd but good that was on display tonight. 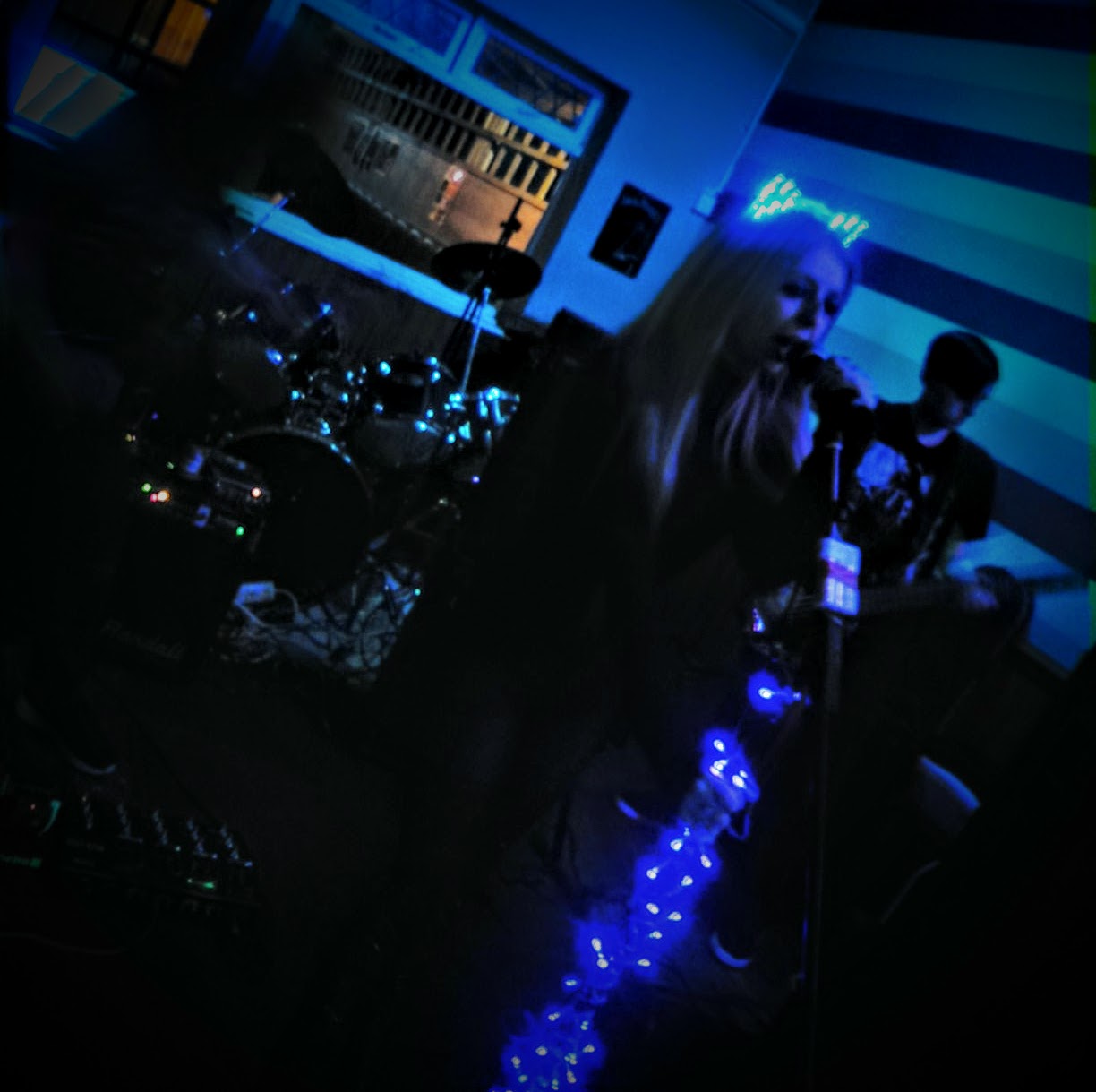 Nexxus Empire – a band that started off as a Skinflick side show, until Skin flicked off and the remaining members decided to carry on in spite. Their sound still drags around that industrial clutter, but, as Bangor promoter James Phillips stated, ‘They are an evolution.’ And he is right. They are between sounds, and tonight, like the previous time I’ve seen them, is perhaps not the time to judge them, being two members shy of a full line up. It was left to vocalist Sarah, guitarist Dan and bassist Gwion to roll the steel barrel while absent members enjoyed the Download Festival and/or nursed lost limbs.
It’ll be interesting to see how songs like Atom Bomb, Game Over and Spine Puppet fare when given the full band approach; do they keep those psycho-bleep sounds that accompany the drum-machine?
I did chuckle at the faces of passing beerheads who wandered into The North and into this dark backroom, where an industrial goth band are playing, fronted by a blonde pixie with illuminated cat-ears… Ace!
Like James said, They are an evolution… 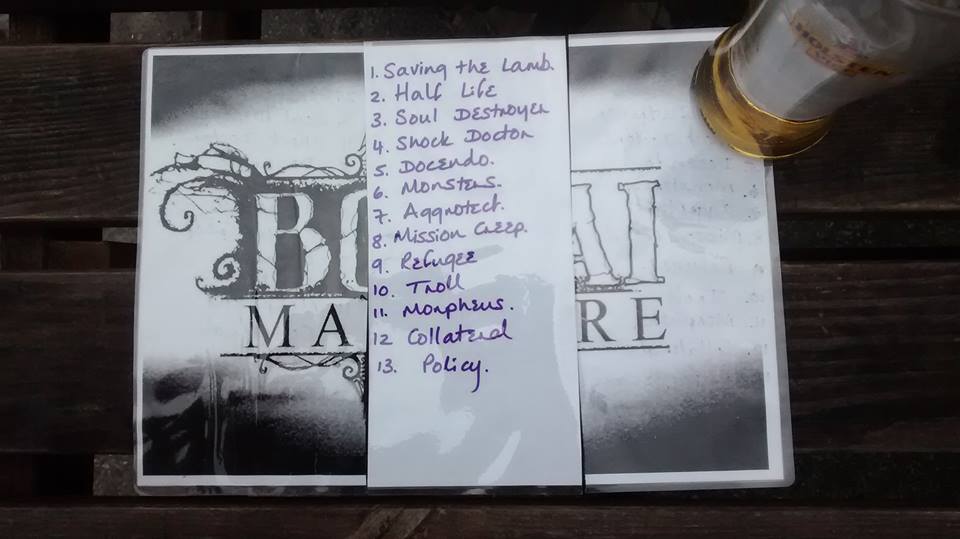 Bonzai Massacre are an entity unto themselves, and if they could keep their set down to 35 minutes; as in cut it in half, then they would also be the real deal… Sung from the back in a Rudimentary Peni-like strain by the blood-vessel bursting Chris Williams, they vent anger and angst… It’s an apocalyptic vision of an already apocalyptic world, delivered by a genre-confused fist to the face. It’s a niche market, it’s a bonzai massacre and no tree gets out alive from this bleak and desolate landscape.
The genre-hopping elements, I guess come from the lick-riffing Aled Lewis and his superb guitaring that rips from Metallica type shredding to doom to Killing Joke. Throw in Tracey Howarth, who is the coolest bass player in North Wales (ever!) and you’re given huge slabs of Monsters, Aggrotect, Refugee amongst their repertoire.
I start to fantasize about Bonzai Massacre having two drummers, with one playing tribal toms and an additional guitarist chundering in the background… AND they only played for 35 minutes.. Ha!