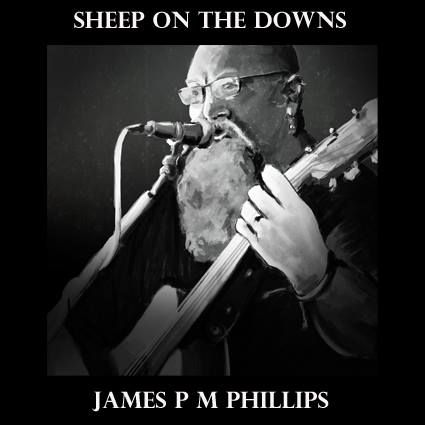 The North Wales music scene, although many wouldn’t realise it, is a vibrant place, brimming with bands and artists that really are making amazing things happen.  The outside world may not notice so much, which is a sad thing, but that can change.  Recently, I was handed an album which I was asked by the artist himself to review.  Not one to shy away from such a proposition, I said ‘yes’, and I am glad to have said that.

James Phillips is a man without whom the Bangor music scene would sorely suffer.  I interviewed him last year, and he is as passionate as he is clever, a kind of guru for music as a life choice.  He’s been playing, writing, and releasing music – both with bands and on his own – since the eighties, and his unwavering dedication to honing his craft has never seen him stagnate.  This latest offering is entitled ‘Sheep on the Downs’, a nine-track album of solo songs recorded live in Bangor’s Crosville Club by Simon Darvell.  It’s being released on the 16th of April alongside Andy Bob Beaumont’s new album ‘Shed Songs’, with a launch party happening at the Skerries, Bangor on that night.  I’m going.  I hope you will be, too.

But anyway, the main question: Is James Phillips’ album worth your time?  It’s an honest question.  My honest answer is: Yes.  It’s a man and his guitar, singing heartfelt songs in a heartfelt way.  It’s a folk version of Johnny Cash’s American Recordings, music stripped back to its very rawest essence.  No overdubs or extra touches are present on these tracks; some may find this to be a somewhat bare experience, but I find it creates a much more intimate audio setting.  You couldn’t exactly go jogging or blast this out your car (although I’d love to see the latter happen!), this album requires you to sit, to be still, and just relax into the music.

The music evokes a simpler time, despite its usage of contemporary settings.  James talks of the traffic jams around Birmingham and the M25 during the album’s title track, while he sings of his yearning for less-stressful places and pastimes, something all of us nowadays can get behind.  Although he’ll never admit to it if you ask him, he’s a talented guitarist, with his acoustic guitar going from ethereal to energetic with just a flick of his fingertips.  There’s a flash of Fairport Convention in his tunes, mixed with a bit of Cohen and Cash for taste.

‘Sheep on the Downs’ feels bitter-sweet: An album on homesickness, longing, desire and depression, which is painfully apparent on the track ‘Cold, so Cold’.  I found this the most evocative and hard to listen to song on the album, as it’s so honest and sad.  It’s both melodious and melancholy, with lyrics that have been tapped straight from the heart of sorrow itself.  Some may choose to skip this song, but music that can illicit such a response is powerful, and deserves to play on your emotions for a few minutes.

North Wales has its fair share of talented people making music.  James Phillips is but one of those people, but his album ‘Sheep on the Downs’ is definitely one to make time for. Each song is a story in itself, told by an expert teller; sit down a while and take in a tale or two. 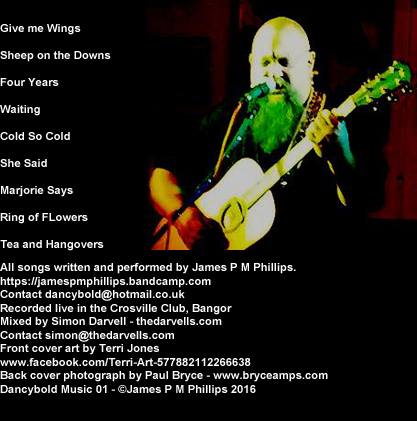