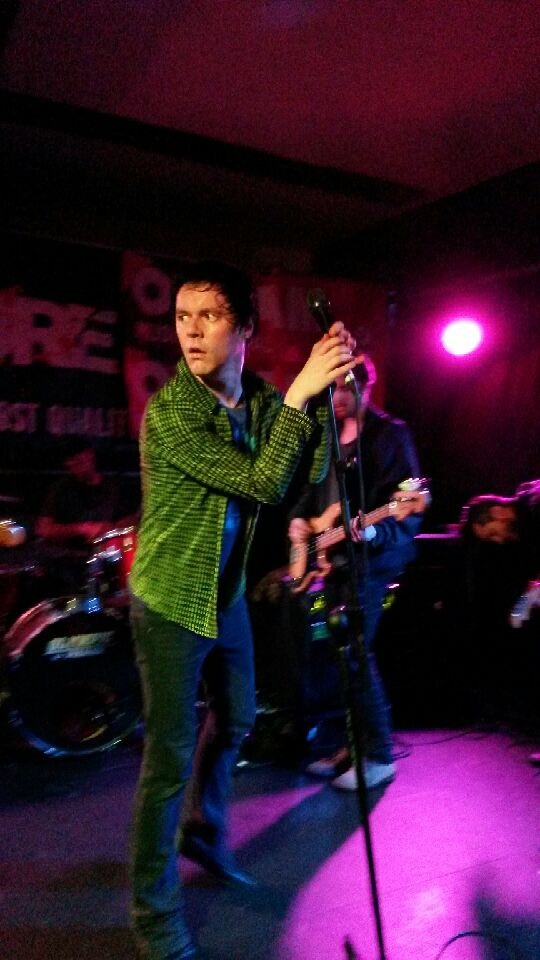 1. If you consult my fucking amazing website link2wales, you’ll find there is only scant information on Lovers Open Fire. So please can you enlighten me and the readers as to who you are and why you are.
First of all let me say that this interview is the scribbled result of the four of us sitting around reading the questions and having a cackle. We’re a carbon based, multi-cellular rock and roll junket located somewhere in the anogenital distance between Shropshire and Cheshire. Why? Well otherwise we might just die of FACTS! We’re not just here to paint the shed, are we?

2. I picked up a Fag Machine vinyl album in some alleyway record shop in Wrexham during Focus Wales… Would you say Lovers Open Fire are a progression of Fag Machine or are you two completely different bands.?
We like to think of The Fag Machine like a pissed-up younger brother. You can have a go at him, but you know you did the same stuff when you were his age. He’ll be fine as long as he stays in school. Pretty soon there’ll be hair everywhere, and girls will make him feel all funny. Oh, alright – we’ll answer it properly. Hopefully it’s a progression, yes. Sometimes, to stay in love with something you have to crawl underneath and get a pair of pliers on it.

3. This interview came about after you asked me if I knew of venues / promoters who are putting on gigs. And yeah sure I do, but I also found it a struggle because Lovers Open Fire straddle genres – too soft for all out punk rock and too hard for twee indie. And yet I fucking love your stuff..! Where does the song writing inspiration come from? What do you listen to?
Oh god, it’s the “eclectic” journo finger trap! Well, let’s see…We listen to everything; ice-cream vans, screaming kids, muttering mothers in Argos…it’s all going in all the time, see? Oh, alright – Beefheart, The Velvets, The Fall, Waits, Cave, The Bunnymen and that Echo chap. That’s the meat of it. Lately, it’s Parquet Courts, The Fat White Family, St. Vincent. We’re told we write dark, semi-coherent stuff. The usual blurb from people who churn out this kind of music usually amounts to anti-corporate politics or something superficial about catharsis and “working things out”, but that’s just a sliver of it. The fact is, this thing runs on love, and being able to take the piss out of one another. You don’t write together as a group for seven years because you’re fucking seething inside. Bottom line, man – it’s fun! Alongside that, the greatest writing inspiration is the monotony of the music itself; if you do the same set for a year your skin starts to crawl. That’s where we are right now, and it itches like a bastard. At the same time, you can’t force it either. Music’s bloody stubborn, more often than not.

4. On a similar subject, the Wrexham scene seems to be pretty vibrant over the last 18 months, but I fear that it could inadvertently become insular… I see lots of gigs going on, but a lot of gigs with the same bands on the bill every time. I feel Wrexham should open it’s doors and seek bands from outside the area to play at these gigs and also Wrexham bands to seek to play further afield (as some do) and less in their own backyard. This is not really a question, but if you wanna contribute your input then please do!
In Wrexham there’s a fairly close scene of friends supporting each other, that’s true. It could easily look like a clique if you’re just in town for the weekend, but anyone living here would see close up that the one thing we really have in common is that we’re all clinging on for all we’re worth. You mentioned Focus Wales before – I’m pretty sure half of the bands those guys book are from way outside of town every single year, and the other promoters we know import bands as regularly as they can afford to.

5. And on a local level – Any particular bands you really rate? And why….?
Local? Now, now – we wouldn’t want anyone to think we were being insular Neilio! Insert a smiley face next to that one, please – we don’t want to come off all Johnny Rotten. Seriously, if we start listing ‘em, we’re bound to miss someone out. Sleepless nights, Neil – sleepless nights.

6. What was the first band you saw live? What was the first record you bought?
Jim doesn’t remember.
Chennells: ‘Jumpin’ Jack Flash’ 7” by Aretha Franklin.
West; ‘Do the Bartman’ 7”
Laz; Serge Gainsbourg – ‘Aux Armes et Caetera’ on CD

7. What is it like being in Lovers Open Fire? Are you an active band, in that you live breathe and fuck your music? Or do you find bursts of inspiration followed by lengthy periods of ‘downtime’ ?
I ask this because there are bands who really fuck me off as they spam the living fuck out of everyone to the point where I intentionally avoid them and there are others who wait for the world to land on their laps…
My experience tells me a band needs to find that happy medium of being active; of being not too far from minds of people, but without pissing them off.
Do we fuck our music!?! Hey, we’re buying the drinks. We practice twice a week, have done for years and we try to put up news only when there is news. It’s understandable though, why some people overcook it. Certain bar and club owners don’t care a stuff what you sound like, just about your online presence. You get booked all the time by people who’ve never heard you! Chances are, they’re stabbing away at a Blackberry and haven’t got time to listen. Most music sounds shocking coming out of a ‘phone too, so you can’t always blame ‘em.

8. I’m listening to your excellent Live Dinner Theatre EP right now and eagerly anticipate more material. Are you going to grant us another release? And if so, what have you planned?
Another EP is due this winter. This one wasn’t recorded live though. It’s about everything. Really! It takes ages to write a song about everything.

9. Having seen a couple of your live shows, I can wholeheartedly say they were an experience I’ll never forget… Trance inducing psyche rock-punk-hippy-spunk – you are all wired to the mains and they were performances I never wanted to end. So why the fuck don’t you play more often, and why fuck don’t you get your name out there and under the noses of the ignorant masses?
Stop swearing lad! You’re terrible! We do play quite often, average of about once a month. We’re out of town almost every other gig, too. Are the masses ignorant? Do you smoke marijuana cigarettes and belong with The Reds? Heheheh – No, we do try to avoid weekday shows with jumbled line-ups, like our pissed-up younger brother. We don’t need attention for its own sake. We’ve all got mirrors at home, if that’s what it’s about. Did we really put you in a trance? Damn, we could have charged you twice. We really should point out to any children that may be reading that we’re never at any time actually wired to the mains. It’s just good sense.

10. So once you’ve finished this interview, will you promise me that I’ll find Lovers Open Fire on countless obscure podcasts, in countless underground magazines across the universe and gigs outside Wrexham?
Pinky promise? Well, we were built for a fashionable, robust obscurity I should imagine. You’re a good man Neil, we like you! See you underneath!

(check out their EP on Bandcamp right now!)