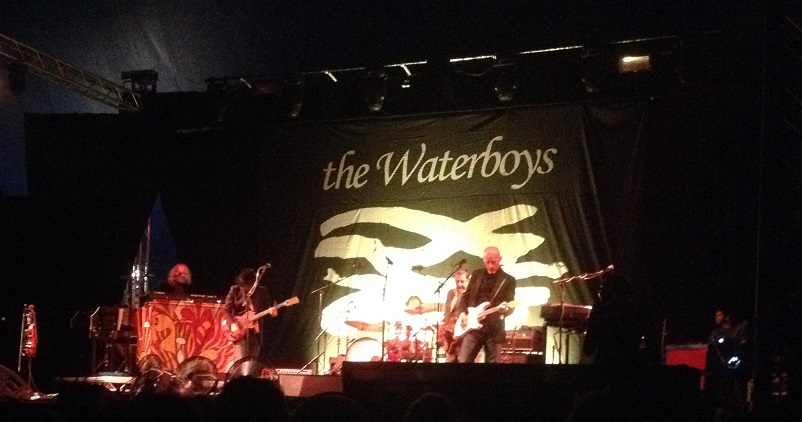 Over the years I’ve heard a lot about Green Man Festival and always wanted to go- it’s always good to see a Welsh event go from  strength to strength and now in its tenth year this festival is growing a fearsomely good reputation for what’s on offer both musically and as a festival “experience”. A lot of this is of course down to the beauty of the location nestling in the middle of the Brecon Beacons – bordered by the river Usk and framed by the Pen Cerrig Calch Ridge. The site is a real gem and liberates a portion of the Glan Usk estate  from the crachach for a weekend –  and the weather remains thankfully dry for most of the time.

The number of people arriving on Thursday is testament to the festival’s popularity the tickets having all sold out in the weeks before. Getting in meant a fair bit of queuing typical of a festival this size. As my entry took longer than anticipated I decided to plough on  straight in and  familiarise myself with the site while still daylight. My initial impression was that things were a bit posh and pricey – not quite as bad as No 6 but getting that way. One particular downside was that the bars were enormously busy – think student union type scrums and long queues

So, weirdly for the first time in many years. I found myself on the opening night of a festival without a drink in my hand and no tent put up, because come what may I wasn’t missing the Waterboys. Now this is a band I share a lot of history with – It’s almost 30 years since I woke up from a red wine induced haze in front of  the Glastonbury pyramid to witness a jaw droppingly intense band in mid flow at the height of their “big music” phase- I had no idea who they were but I was hooked and the ensuing heady years saw me lock in to their trajectory  while they spun wildly out of orbit. I saw the raggle taggle version of the band many times including a memorable show in Tralee,  hell, I even went to Spiddal to see if I could capture the vibe from those legendary  Fisherman’s Blues sessions (I was two years too late but the West Coast of Ireland  is never a disappointment)

Mike Scott is Big Chief Waterboy – the originator, the kaiser, the visionary – but he’s always defined by his choice of accomplices. By now it’s become a bit like the Fall – at the last count over 70  musicians have played in the live band and there’s even a Waterboys UK and USA version. There are key conspirators who are fundamental to the spiritual and commercial vision- not least “..the fella who fiddles..” Steve Wickham – probably the finest example of how a violinist can work in a rock context and a player who can lift a room with the power and dexterity of his playing. His acrimonious exit from the band in the early 90s almost fatally holed the ship but happily he’s restored and it’s hard to imagine how many of these songs could exist without him. It’s sobering to think  he’s been a member with this incarnation of the band longer than he was the first time round but back he is – a bit more grizzled in a fabulous jacket and still an electrifying stage presence. Come to think of it, there’s a grizzled look to the whole band actually but then again you can’t dress mutton up as lamb; this is essentially a bunch of middle aged blokes playing a greatest hits set at a festival. While a fair few members of the audience are equally grizzled (myself included) there are a large number of younger folk probably not born when these songs were written equally enjoying the proceedings and singing along.

They open with Strange Boat and Fisherman’s Blues – the latter causing some high spirited swaying and whooping from the audience. Scott moves to the piano for the lollaping rhythm of Girl Called Johnny – their first ever single. The rockier elements of the band get a showing with We Will Not Be Lovers and a 12 bar blues called Still a Freak –  it’s a new song with a sharp self effacing lyric whose subtleties are lost in this setting and the energy does start to drop a bit. However things immediately step up a gear when another oldie All The Things rocks out with an outstanding Hammond organ solo from new keyboardist Paul Brown. This is another musician who like Wickham can inspire with his playing and the audience cheers him midsong when he solos.  Imagine hippy uke player Tiny Tim crossed with Animal from the Muppets and you get a feel for his stage presence – his joy and passion for the songs is infectious

Glastonbury Song continues the guitar bombast but happily Raggle Taggle Gypsy offers some acoustic relief with Scott and Wickham blending perfectly. They play another new song Mist and Snow and it already feels like a Waterboys classic – an instrumental section sees Wickam and the keyboardist don harlequin masks – and things get seriously weirder when Scott reappears wearing a mask with three faces on it – part Greek Theatre part Peter Gabriel era Genesis – while reciting Patti Smith style verse as the band cooks away beneath him – it’s utterly bonkers and brilliant.

The Pan Within loses me with a slightly creepy interlude about tent frolicking but we’re on the home run now as THAT song needs to be played – it can’t be easy always having to play an anthem like The Whole of The Moon but tonight it’s dispatched with aplomb  and made especially poignant by a dedication from Scott to comedian Robin Williams as “someone who reached too high, too far and too fucking soon”

They return to play How Long Will I Love You. Now if ever there was a Waterboys album that needs re-evaluation its Room To Roam -a record packed with so many wonderful tunes that this one got lost in the undergrowth. But somehow somewhere Ellie Goulding (of all people) covers it, and one  charity single later another Waterboys tune enters the public consciousness  almost three generations down the line from Whole of The Moon –  this is a great thing even if most people who know the song probably have no idea who Mike Scott is. Something he grumpily  alludes to in his outro.

So this version of the Waterboys has much to commend about it – they can be workmanlike and a bit too rocky at times, but when they’re good they more than do justice to the songs and soar to the heights they always did… and with songs this good one suspects they always will. Personally I would have preferred to see them on the outside stage as opposed inside in a tent but apart from that a top gig.